Sabarimala : Kerala HC Lifts Restrictions Imposed By Police; Declares That Place Should Not Be Used For Protests; Appoints A Team Of Observers [Read Order] 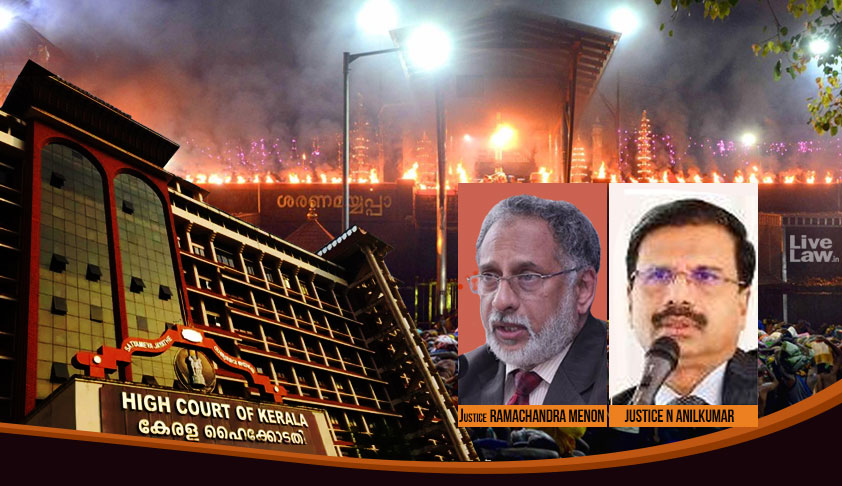 The High Court of Kerala on Tuesday passed a slew of directions to ensure peaceful pilgrimage at Sabarimala with requisite amenities and facilities.The Court ordered that "all unilateral restrictions imposed by Police except to the minimum required extent to meet the law and order situation shall stand deleted, particularly with regard to right of pilgrims to conduct "namajapam" and...

The High Court of Kerala on Tuesday passed a slew of directions to ensure peaceful pilgrimage at Sabarimala with requisite amenities and facilities.

The Court ordered that "all unilateral restrictions imposed by Police except to the minimum required extent to meet the law and order situation shall stand deleted, particularly with regard to right of pilgrims to conduct "namajapam" and chant 'sharanamanthra'. So far as it does not amount to any protest or demonstration or design to indulge in any unlawful act or instigating others to indulge in any unlawful act, affecting the law and order situation, there shall be no intervention from the part of police adversely affecting the rights of pilgrims or as part of "Crowd Management Scheme".

The Court held so accepting the contention of the petitioners that police had no powers to add to the conditions imposed by the Executive Magistrate in the prohibitory order issued under Section 144 of CrPC. The Court also noted that under Section 83(2) of the Kerala Police Act, it is the Government and not the police, which has the power to impose restrictions in an area notified as "Special Security Zone".

At the same time, the Court clarified that lifting of restrictions should not be used to make the area a "place of protest". It was held : "Incidentally, we would like to make it clear that the interference made by this Court to the above extent, removing the restrictions, to the extent found as unreasonable, at the same sustaining reasonable restrictions., it shall not be misused by the pilgrims or anybody proclaiming themselves as pilgrims, causing the area as a place for protest"(emphasis supplied by Court).

It was added that any attempt to thwart peaceful "darsan" can be checked and interfered by police and that they can conduct reasonable extent of search, interrogation and such other process to provide peaceful darsan. "All stakeholders are required to co-operate with such efforts taken by the police in all aspects", said the Court.

The directives were issued by a Division Bench of Justices P R Ramachandran Menon and N Anilkumar. The bench was hearing a batch of writ petitions which challenged the police restrictions as excessive, and highlighted grievances regarding lack of adequate amenities and facilities for pilgrims like food, accommodation, transport etc. The Division Bench also took into consideration the report filed by Special Commissioner of Devaswom(who is a District Judge) regarding the state of affairs at Sabarimala, on the basis of which a suo moto case was registered.

The other significant directions issued by the Court are as follows :

The Court also appointed a Team of Observers, comprising Justices P R Raman and S Sirijagan, former judges of Kerala High Court and DGP A Hemachandran. The Team will have power of overall supervision and to take spot decision to give effect to directions issued by the Court and to ensure smooth and safe pilgrimage.

Regarding the incident of "water-spraying"  at nadappandal, which was allegedly done by police to prevent stay of pilgrims there, the Court accepted the explanation offered by the Advocate General that it was done by Fires and Rescue Department and not police, and that it was a routine exercise undertaken  every year to wash off dirt and dust.

The Court refrained from examining the merits of the prohibitory order issued by the Executive Magistrate, as it is subject matter of another writ petition which is scheduled to be heard on December 6.