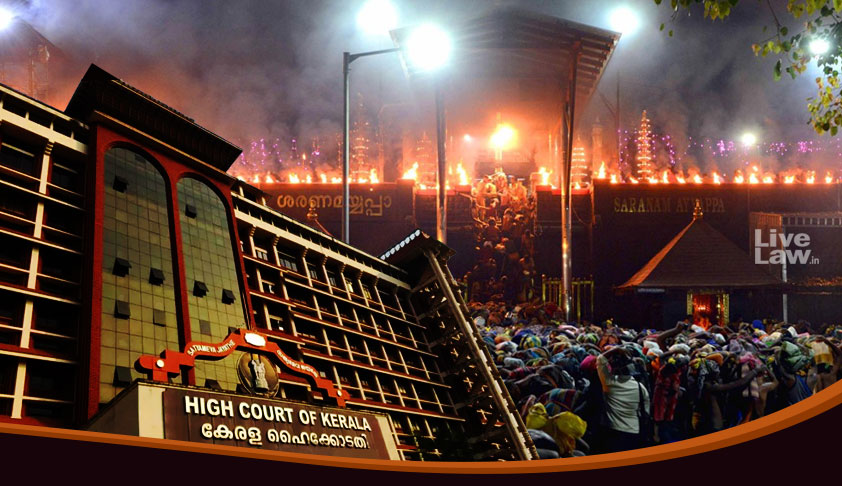 In the backdrop of Sabarimala temple entry issue, a petition has been filed in the High Court of Kerala alleging that the Chief Minister and Dewaswom Minister of Government of Kerala were making excessive interference in the functioning of Travancore Dewaswom Board, especially with regard to practises and ceremonies in Sabarimala Temple.The petition is filed by T.R Ramesh, who is stated to be...

In the backdrop of Sabarimala temple entry issue, a petition has been filed in the High Court of Kerala alleging that the Chief Minister and Dewaswom Minister of Government of Kerala were making excessive interference in the functioning of Travancore Dewaswom Board, especially with regard to practises and ceremonies in Sabarimala Temple.

The petition is filed by T.R Ramesh, who is stated to be an ardent Ayyappa devotee and also the President of Indic Collective Trust, a trust formed to preserve Indian traditions. The petitioner states that the decision announced by the Chief Minister of Kerala that Ayyappa devotees will be permitted only 24 hours stay at the shrine amounts to interference with the day to day functioning of the temple. It is further contended that the Chief Minister and Dewaswom Minsister were issuing directions and public statements formulating modalities for entry of pilgrims in the temple. The Government has no authority of law to regulate the entry of pilgrims in the temple.

Referring to Section 31 of the Travancore Cochin Hindu Religious Institutions  Act, the petitioner states that the Dewaswom Board has to administer a temple vested with it in accordance with its 'usages'. The 'thanthri' has the final say in the matter of rites and rituals of the temples. The petitioner further contended that the Government has not been given any power under the Act to issue any directions regarding the day to day functioning of the temple. However, the Devaswom Minister himself stayed in Sabarimala to issue directions to the Board as to how to conduct themselves in religious observances.

"As per the scheme of the Act, while the administrative control falls exclusively only in the Board, most of religious, rituals, ceremonies, performances, observances, practises etc. fall exclusively within the domain of the Thantri, who is the last word on the issue", the petition stated.

It was further stated that the Government  has taken an "unusual and adamant stand" that the judgment of the Supreme Court will be implemented. The Government has no role in implementing the judgment. The petitioner has the fundamental right to undertake pilgrimage Sabarimala in accordance with its long standing rituals and practises. The petition stated that "it is possible that even a hardened man can be deviated into violating the Vritha by the presence of young women in large numbers" and voiced the apprehension that  "large influx of young women will hinder the form of worship followed for several years together and therefore some restraint on young women is needed".

It is also stated that the move to deploy about 5000 policemen in the Sabarimala area was intended to interfere with the right to worship of devotees.

"The presence of so many policemen is intended to scare away genuine Ayyappa bhakts. No restriction can be placed by the Minister on the time of stay of pilgrims as it is a matter of religion protected by the Constitution...In addition to that, the Government have no role at all to impose such restrictions on pilgrims as Government has no authority over the entry of pilgrims, form of worship etc. No direction can be issued to the Dewaswom as it is a statutory authority", the petition says.

The petition came up for admission today before a Division Bench of Justice P R Ramachandra Menon and Justice N Anilkumar. Senior Advocate K Ramkumar, appearing for the petitioner, submitted that the entire tract between Pampa and Sannidhanam is exclusively vested with the Devaswom and hence the Government had no power to deploy thousands of policemen there in the absence of any request for security cover originating from the Devaswom. He further submitted that large scale police deployment will convert Sabarimala into a battle ground where peaceful and solemn prayer will not be possible.  The Senior Counsel also submitted that the Government cannot impose any curfew in the Sannidhanam area.

Relying on the SC decision in Sri Adi Vishwesara of Kashi Temple Varanasi vs State of UP(1997) 4 SCC 606,  Ramkumar submitted that the Government cannot interfere in the religious observances of a temple. The Devaswom Board is a statutory body, having powers and functions conferred by the Act; therefore, the Government cannot direct the Board as to how it should exercise its statutory powers and functions, advanced the Senior Counsel.