“Same day conviction and sentence” : ‘The Times of India’ gets ‘caught on the wrong foot’ again 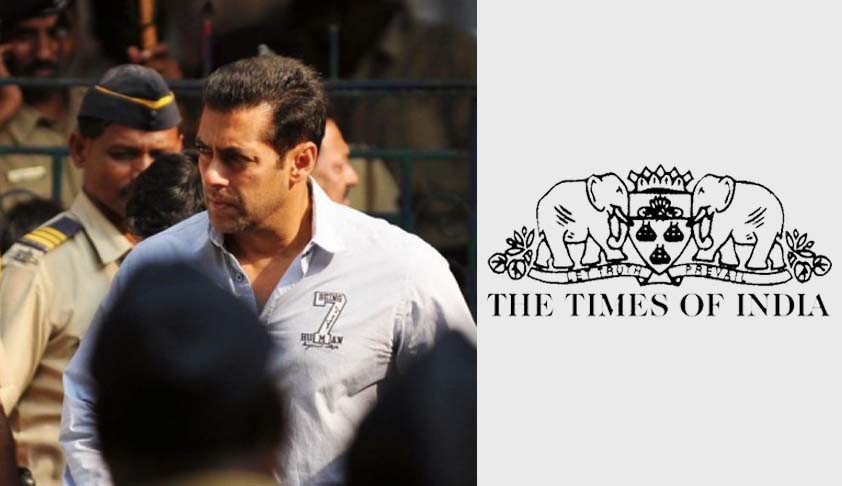 The verdict of the Sessions Court in Mumbai holding Bollywood actor Salman Khan guilty of culpable homicide for his act of ramming a roadside bakery with his Toyota Land Cruiser on September 28, 2002, killing one person and wounding four others sleeping on the pavement outside, and sentencing him to five-years’ rigorous imprisonment and a fine of Rs. 25,000 has sparked extreme reactions,...

The verdict of the Sessions Court in Mumbai holding Bollywood actor Salman Khan guilty of culpable homicide for his act of ramming a roadside bakery with his Toyota Land Cruiser on September 28, 2002, killing one person and wounding four others sleeping on the pavement outside, and sentencing him to five-years’ rigorous imprisonment and a fine of Rs. 25,000 has sparked extreme reactions, with the common man so to speak, welcoming the verdict, and Bollywood celebrities and some other high-profile sympathizers expressing shock at the judgment and expressing their solidarity with Salman Khan. Even among the celebrities and ‘twitterati’, opinions have been divided.

Not to be left behind, one of India’s widely circulated newspapers, The Times of India has carried a report in its pages by its reporter Dhananjay Mahapatra today questioning the legality and propriety of the Mumbai Court in convicting and sentencing Salman Khan on the same day. ‘The Times of India’ claims that Mumbai Court’s verdict runs counter to the Supreme Court’s 's 25-year-old judgment asking trial courts not to impose sentence on the day it finds the accused guilty. The Times of India was adverting to the decision reported in Allauddin Milan v. State of Bihar [1989 SCC (3) 5]

In Allauddin Milan v. State of Bihar [supra], the Supreme Court had ruled that all trial courts, after pronouncing an accused guilty, must adjourn the hearing on quantum of sentence to another day to enable both the convict and the prosecution to present material in support of the quantum of sentence.

It is true that Justice Ahmadi in Allaudin Milan (supra),  while interpreting S.235(2) of Code of Criminal Procedure 1973, held that “as a general rule, the trial courts should after recording the conviction adjourn the matter to a future date and call upon both the prosecution as well as the defence to place the relevant material bearing on the question of sentence before it and thereafter pronounce the sentence to be imposed on the offender.”But as explained in this article by Live Law co-founder and Editorial Consultant of LexisNexis-India, Mr. M.A Rashid, in Allauddin Mian, the Supreme Court failed to consider the implications of Amendment Act No: 45 of 1978 whereby a new proviso was added by Parliament to Section 309(2) of the Code of Criminal Procedure (Section 309 Cr.P.C. deals with the power of Courts to postpone or adjourn proceedings) which is as follows;

A bare reading of the newly added proviso to Section 309(2) of the Code of Criminal Procedure goes to show that the dictum laid down in Allauddin Mian is in direct conflict with the statutory provision.

Though Mr. Rashid had written his article in the context of the judgment rendered by the Bangalore trial court in the disproportionate assets case, it can be seen that in both the ‘2002 hit and run case’ and the ‘disproportionate assets case’ , Salman Khan and Jayalalitha respectively, were convicted and sentenced on the same day. Interestingly, Mr. Rashid had penned his 2014 article to clarify the legality of ‘same day conviction and sentence’ after the very same reporter in the very same newspaper who has now questioned the legality of imposing the sentence on the same day as the conviction, had expressed doubts about the Bangalore trial court having violated the Supreme Court's mandate by convicting and sentencing former Tamil Nadu chief minister J Jayalalitha on the same day, September 27, in a disproportionate assets case.

As M.A. Rashid opines in his 2014 piece : “ In my opinion there is no statutory support to the proposition laid down in Allauddin Mian; instead there is a statutory prohibition in adjourning   the matter for hearing on question of sentence. Moreover, both in Santha Singh and in Allauddin Mian the Court was dealing with the imposition of Death Penalty without the accused being properly heard regarding question of sentence.”

Mr. Rashid continues, and here it may be profitable to quote the relevant portion of his article verbatim:

Undoubtedly under S.235(2) of Code of Criminal Procedure, the accused is entitled to an opportunity to adduce evidence and if need be the case is to be adjourned to another date. There is illegality to convict and to impose sentence on the same day. It is true as contended for the State that under S. 309, third proviso brought by Amendment Act, 1978 that no adjournment should be granted for the purpose only of enabling the accused person to show cause against sentence to be imposed upon him. Under S. 235(2) when the accused has been given right to be heard on the question of sentence it is a valuable right. To make that right meaningful the procedure adopted would be suitably moulded and given an opportunity to adduce evidence on the nature of the sentence. The hearing may be on the same day if the parties are ready or to a next date but once the court after giving opportunity propose to impose appropriate sentence again there is no need to adjourn the case any further thereon. But the Times of India report had not mentioned about the above developments in the report.”

A reading of the two reports by the same reporter in the Times of India shows that he has committed the same mistake in his reporting today. While it may well be possible that he or the Times of India may not have read Mr. Rashid’s 2014 article in Live Law, it is indeed a mystery as to how the reporter could have been ignorant of the proviso to Section 309(2) of the Code of Criminal Procedure or about the Supreme Court’s subsequent clarification of the dictum laid down in Allaudin Mian, in Sevaka Perumal (supra) had not been adverted to in his latest report questioning the propriety of the Mumbai Court in pronouncing the sentence on the same day that it convicted Salman Khan.

The result of this advertent or inadvertent omission by the reporter of the Times of India will naturally be that the gullible reader, not well-versed in law, may wrongly get the impression that the Mumbai Court has committed a grave illegality and that Salman Khan had got a raw deal from the Court, when in law, there is no illegality, much less any infirmity in trial judge D W Deshpande’s approach.

Closing his 2014 article, Mr. Rashid had summed up thus : “It is beyond any doubt that the 36th Additional City Civil and Sessions Judge (Special Court for trial of Criminal Cases against Kum.Jayalalithaa and Ors) John Michael Cunha adhered to the principles of law and has not violated any judgment of our Supreme Court. The Times of India is caught on a wrong foot.”

Mr. Rashid and indeed, the rest of us might not have imagined that the Times of India would be caught committing the same mistake again, but we have been proved wrong: The Times of India has been caught on a wrong foot, not once, but twice now! Surely, ignorance is not bliss?!