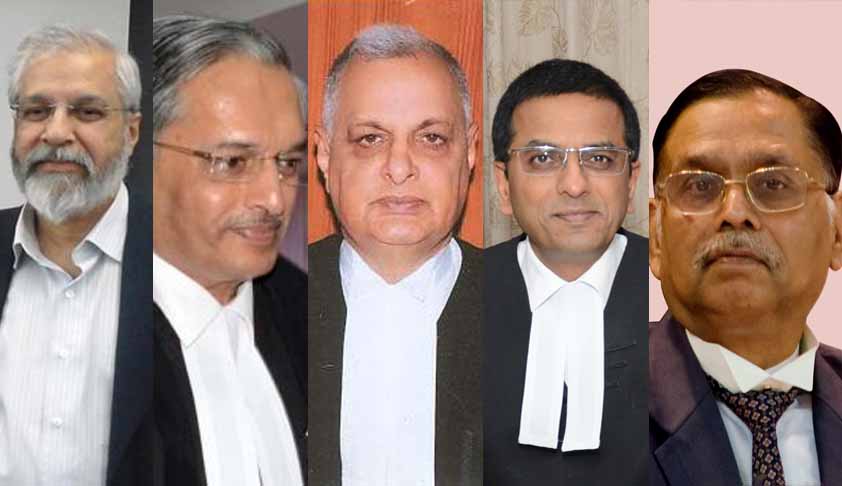 Supreme Court’s five-Judge Constitution bench on Wednesday, April 19, began hearing the questions referred to it by a two-Judge bench in the Assam Sanmilita Mahasangha v Union of India in 2014. The bench comprises Justices Madan B.Lokur, R.K.Agrawal, Prafulla Chandra Pant, D.Y.Chandrachud, and Ashok Bhushan.On Wednesday, the bench spent just an hour to familiarise itself with the...

On Wednesday, the bench spent just an hour to familiarise itself with the issues referred to it by the two-Judge bench in 2014.

After hearing senior counsel, Shyam Divan, Sanjay R. Hegde, and Additional Solicitor General, P.S.Patwalia, the bench decided to finalise the schedule for the hearing on May 8, after reading written submissions of the counsel. The bench will decide whether it can hear and complete it between May 11 and 19, as planned. In the alternative, the bench may decide to list it after the summer vacation.

Hegde also hinted that the case raises larger questions like nativism, who are Indians and who are Assamese. He asked whether a particular community living in a particular State could be suspected of their citizenship status, thus violating the Indian Constitution’s guarantee of equality and non-discrimination to all persons.

Following issues of importance have been referred by the two-judge bench to a Constitution bench, in Paragraph 33 of the 2014 judgment:

(i) Whether Articles 10 and 11 of the Constitution of India permit the enactment of Section 6A of the Citizenship Act in as much as Section 6A, in prescribing a cut-off date different from the cut-off date prescribed in Article 35 Page 36 6, can do so without a “variation” of Article 6 itself; regard, in particular, being had to the phraseology of Article 4 (2) read with Article 368 (1)?

(ii) Whether Section 6A violates Articles 325 and 326 of the Constitution of India in that it has diluted the political rights of the citizens of the State of Assam;

(iv) Whether Section 6A violates Article 355? What is the true interpretation of Article 355 of the Constitution? Would an influx of illegal migrants into a State of India constitute “external aggression” and/or “internal disturbance”? Does the expression “State” occurring in this Article refer only to a territorial region or does it also include the people living in the State, which would include their culture and identity?

(v) Whether Section 6A violates Article 14 in that, it singles out Assam from other border States (which comprise a distinct class) and discriminates against it. Also whether there is no rational basis for having a separate cut- 36 Page 37 off date for regularizing illegal migrants who enter Assam as opposed to the rest of the country; and

(vi) Whether Section 6A violates Article 21 in that the lives and personal liberty of the citizens of Assam have been affected adversely by the massive influx of illegal migrants from Bangladesh. (vii) Whether delay is a factor that can be taken into account in moulding relief under a petition filed under Article 32 of the Constitution?

(viii) Whether, after a large number of migrants from East Pakistan have enjoyed rights as Citizens of India for over 40 years, any relief can be given in the petitions filed in the present cases?

(ix) Whether section 6A violates the basic premise of the Constitution and the Citizenship Act in that it permits Citizens who have allegedly not lost their Citizenship of East Pakistan to become deemed Citizens of India, thereby conferring dual Citizenship to such persons?

(x) Whether section 6A violates the fundamental basis of section 5 (1) proviso and section 5 (2) of the Citizenship Act (as it stood in 1985) in that it permits a class of migrants to become deemed Citizens of India without any reciprocity from Bangladesh and without taking the oath of allegiance to the Indian Constitution? 37 Page 38

(xi) Whether the Immigrants (Expulsion from Assam) Act, 1950 being a special enactment qua immigrants into Assam, alone can apply to migrants from East Pakistan/Bangladesh to the exclusion of the general Foreigners Act and the Foreigners (Tribunals) Order, 1964 made thereunder?

(xii) Whether Section 6A violates the Rule of Law in that it gives way to political expediency and not to Government according to law?

(xiii) Whether Section 6A violates fundamental rights in that no mechanism is provided to determine which persons are ordinarily resident in Assam since the dates of their entry into Assam, thus granting deemed citizenship to such persons arbitrarily?

Meanwhile, the two-Judge bench of Justices Ranjan Gogoi and Rohinton Fali Nariman, will hear on Thursday, April 20, at 2 p.m. the aspect of border fencing between Assam and Bangladesh, in the same case.