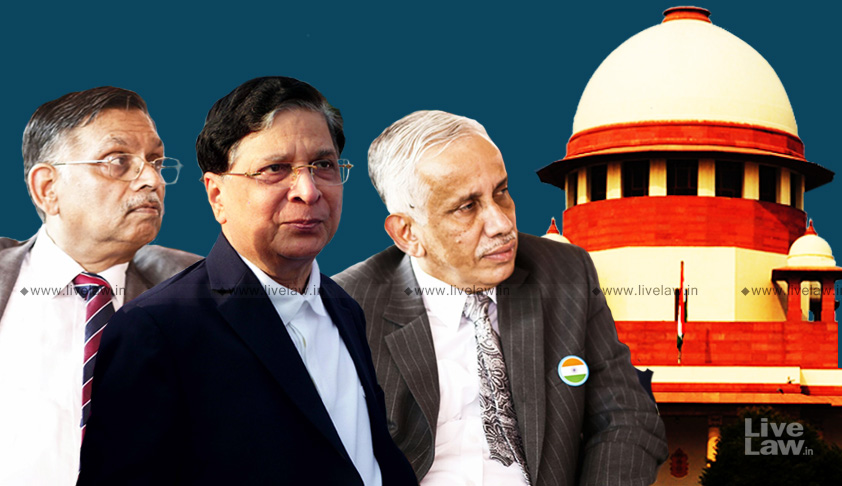 The Supreme Court on Thursday, by a 2:1 majority, refused to refer the Ayodhya-Ram Janmabhoomi land dispute case to a larger bench. While the majority judgment was authored by Justice Ashok Bhushan, for himself and Chief Justice of India Dipak Misra, Justice S. Abdul Nazeer delivered the dissenting opinion.

The majority judgment clarified that the observations made in the Dr. M. Ismail Faruqui and Ors. Vs. Union of India and Ors. judgment, that mosque was not an integral part of Islam, have to be understood in the context of land acquisition proceedings.

The appeals have now been directed to be listed in the week commencing from October 29 for hearing.

The judgment in Ismail Faruqui case

The Constitution Bench in Ismail Faruqui case was deciding on several challenges to the validity of the Acquisition of Certain Area at Ayodhya Act, 1993, by which the Centre acquired 67.703 acres of land in Ayodhya, including the plot where the structure commonly known as Ram Janam Bhumi­ Babri Masjid was situated .

The Constitution Bench had, however, ruled that the acquisition of properties under the Act affects the rights of both the communities and not merely those of the Muslim community. With regard to the State’s ability to acquire a mosque, the court had observed,

“We may observe that the proposition advanced does appear to us to be too broad for acceptance inasmuch as it would restrict the sovereign power of acquisition even where such acquisition is essential for an undoubted national purpose, if the mosque happens to be located in the property acquired as an ordinary place of worship without any particular significance attached to it for the practice of Islam as a religion. It would also lead to the strange result that in secular India there would be discrimination against the religions, other than Islam.”

The Constitution Bench had further held that the right to practice, profess and propagate religion guaranteed under Article 25 of the Constitution does not necessarily include the right to acquire or own or possess property. Similarly, it had asserted that this right does not extend to the right of worship at any and every place of worship.

The main bone of contention was this observation by the Constitution Bench: “A mosque is not an essential part of the practice of the religion of Islam and namaz(prayer) by Muslims can be offered anywhere, even in open.”

Observations were made in the context of land acquisition: Majority judgment

The majority judgment, however, now pointed out that the sentence “A mosque is not essential part of the practice of the religion of Islam and namaz(prayer) by Muslims can be offered anywhere, even in open” is followed immediately by the next sentence: “Accordingly, its acquisition is not prohibited by the provisions in the Constitution of India”. This, it said, “makes it amply clear that the above sentence was confined to the question of immunity from acquisition of a mosque which was canvassed before the Court. First sentence cannot be read divorced from the second sentence which immediately followed the first sentence.”Further justifying the observation, the court emphasised on the view that the observation was made in reference to the argument of the petitioners regarding immunity of mosque from acquisition.

“The Court held that if the place where offering of namaz is a place of particular significance, acquisition of which may lead to the extinction of the right to practice of the religion, only in that condition the acquisition is not permissible and subject to this condition, the power of acquisition is available for a mosque like any other place of worship of any religion. Thus, observation made in paragraph 82 that mosque is not an essential part of the practice of the religion of Islam and namaz even in open can be made was made in reference to the argument of the petitioners regarding immunity of mosque from acquisition,” it explained.

Besides, the Bench dismissed the contention that the Constitution Bench had held the place of birth of Lord Rama to be of “particular significance”, observing, “It is another matter that the place of birth of Lord Rama is referred as sacred place for Hindu community, which has been pleaded throughout. In any view of the matter acquisition under Act, 1993 having been upheld, the use of expression “particular significance” has lost all its significance for decision of the suits and the appeals.”

Furthermore, the Court rejected the contention advanced by the respondents that the principle of res judicata is attracted in the case at hand. It refused to accept the averment that the judgment of Ismail Faruqui should be treated as part of judgment in the suits before it, making reference to the High Court’s observations in the case. It noted that the impugned judgment had categorically held that issues, which have been raised in the suits, are not the issues which can be said to have been noticed and adjudicated upon by the Supreme Court in Ismail Faruqui’s case.