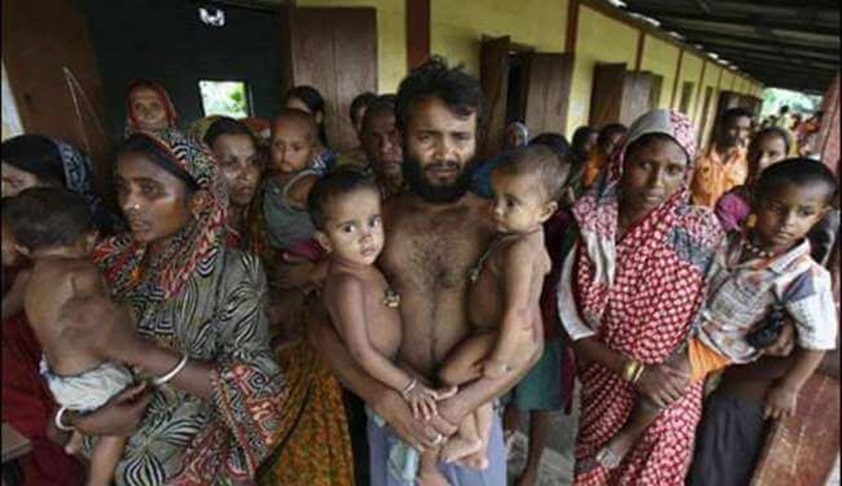 The Supreme Court on Thursday issued notice on a petition demanding a direction to the authorities to ensure humane treatment of those detained in the detention centres in Assam.The notice was issued by a bench comprising Justice MB Lokur and Justice Deepak Gupta, which directed the petition to be tagged along with another Intervention Application raising similar concerns over detention...

The Supreme Court on Thursday issued notice on a petition demanding a direction to the authorities to ensure humane treatment of those detained in the detention centres in Assam.

The notice was issued by a bench comprising Justice MB Lokur and Justice Deepak Gupta, which directed the petition to be tagged along with another Intervention Application raising similar concerns over detention centres. Advocate Prashant Bhushan appeared for the petitioner.

The State of Assam has a checkered history of grappling with the influx of migrants from other parts of India and neighboring countries, especially erstwhile East Pakistan and now Bangladesh. Confronted with the problem of alleged “illegal” immigrants, the process of updating the National Register of Citizens in accordance with the Assam Accord (August 1985) has been undertaken. This process is being carried out as per the directions of the Apex Court, which is monitoring the process.

Meanwhile, the Government of Assam has been engaged in detaining individuals who are declared as foreigners by Foreigners Tribunals within detention centres, pending their deportation. The Home and Political Department of the Government of Assam, in the document titled “White Paper on Foreigners’ Issue” dated October 20, 2012 has justified the detention of such individuals stating that it serves the purpose of ensuring that they “do not perform the act of vanishing”.

The petition, filed by Mr. Harsh Mander, founding member of campaign Aman Biradari for secularism, peace, and justice, now seeks enforcement of fundamental rights under Articles 14 and 21 of the Constitution of India, of those people who are being held in such detention centers in the state.

He seeks redress for violations of fundamental rights and internationally recognized human rights of detainees held presently in six such centres. Such people have been detained either because they have been declared as foreigners by one of the one-hundred Foreigners Tribunals in Assam or after serving out their sentence for illegally entering India, pending deportation.

“…the action of respondents in detaining those declared as foreigners by Foreigners Tribunals as well as convicted foreigners after they have served out their sentence, in six detention centres in Assam, indefinitely and in inhuman conditions, without access to adequate work, recreation, parole, family visits and in deprivation of their rights to health, education, legal aid and appeal, is a violation of Article 21 rights of such detainees,” he asserts.

The petition submits that in the absence of a formal agreement between the government of India and the government of Bangladesh on deportation and repatriation of declared foreigners who are identified by Foreigners Tribunals as Bangladeshis and kept in detention, their incarceration is indefinite, arbitrary and violative of Articles 14 and 21.

The petition is primarily based on the findings of “deplorable conditions” in such centres, as recorded in the report prepared for the National Human Rights Commission (NHRC) by Mr. Mander himself. The report also highlights various rights violations of detainees, including their right to health, education, family unity, work and recreation and access to legal services.

The petition further points out that while on one hand, the government has wide powers of deportation under the law, on the other hand, there are no clear procedures in place for ascertaining nationality of suspected ‘illegal immigrants’ and their subsequent deportation to the country of confirmed nationality. This, it says, compounds the problem of pushbacks of alleged illegal immigrants, leading to violation of International law commitments.

Furthermore, the petition notes that the legal basis for such detention stems from Section 2 and 3(2)(e) of the Foreigners Act, 1946 and Para 11(2) of the Foreigners Order, 1948, under which the Government of India has authorized the Government of Assam to set up such detention centers. It, however, asserts that the capacity for indefinite detention is arbitrary and violative of Articles 14 and 21 of the Constitution of India.

Besides, the Constitutional provisions, it says, are also violated when people are sent to immigration detention without giving them reasonable opportunity of being heard. Additionally, the petition demands safeguards for juveniles in immigration detention, as well as seeks adherence to various international law principles, treaties and conventions for such detention.