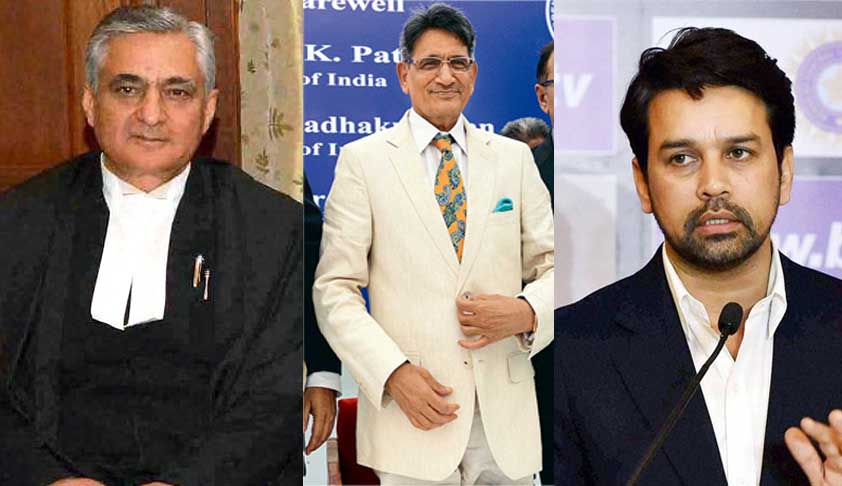 The Supreme Court today removed BCCI President Anurag Thakur and Secretary Ajay Shirke for continued defiance regarding implementation of Lodha panel reforms.Anurag Thakur is in deeper trouble as the bench headed by Chief Justice T S Thakur also issued show cause notice wherein he is to explain why perjury and contempt proceedings shall not be initiated against him for making certain...

Anurag Thakur is in deeper trouble as the bench headed by Chief Justice T S Thakur also issued show cause notice wherein he is to explain why perjury and contempt proceedings shall not be initiated against him for making certain false statements on oath before the court.

"BCCI President Anurag Thakur and Secretary Ajay Shirke shall forthwith cease and desist from any work of the BCCI", said the judgment.

The bench said it will appoint a team of administrators in consultation with amicus Gopal Subramanium and senior advocate Fali S Nariman.

Slamming the board, the bench said BCCI and state affiliates had failed to implement its repeated direction to bring transparency and accountability.

Bench said till administrators are appointed the senior most vice president will operate as President and Joint Secretary as Secretary.

The court also disqualified all BCCI and state body officials who failed to meet new norms set by Lodha panel.

While reserving the orders, the court had on December 15 threatened to initiate contempt proceedings against its President Anurag Thakur for continued stonewalling of the reforms and open defiance of the apex court directions.

Supreme Court’s patience over sustained non-compliance of the Lodha panel reforms by BCCI had run out.

The court had also said it planned to “proceed to prosecute him” (Anurag Thakur) for perjury for making false statements before the court on oath and warned that “once it pronounces its order, the BCCI chief will have nowhere to go except jail”.

“This is frustrating. These were well meaning recommendations three judges of this court took pains involved all stake holders and you are trying to obstruct the reforms”, the bench headed by Chief Justice T S Thakur had also said that it has almost made up its mind to remove the present office bearers of the Board and replace them with a panel of administrators.

The judges have asked both Lodha panel and BCCI to suggest names of administrators and said it will soon pronounce an order on the action it will take against Anurag Thakur and the board’s top brass for continued defiance of its direction to implement the Lodha panel reforms aimed at sweeping changes in the function, structure and administration of the cash-rich board.

The bench is furious that Anurag Thakur went to the extent of attempting to take ICC’s help to wriggle out of Lodha reforms.

When there was ample proof of it on record, he had in an affidavit filed on oath denied the same before the court which the bench said amounted to perjury.The bench found that Anurag had asked Shashank Manohar, the Chairman of the ICC to write a letter to the BCCI that the appointment of a CAG would tantamount to government interference in the working of the BCCI.

“We prima facie feel that you (Anurag Thakur) are in contempt and we also prima facie feel that you are liable for perjury and we are inclined to launch prosecution. Manohar is very clear. You did ask him to write a letter from ICC that CAG nominee in BCCI would affect the autonomy of the board and then you denied it in an affidavit filed before the court. This means you have made a false statement on oath. Once we pronounce the order, your client may have nowhere to go except to jail”: CJI Thakur told Anurag Thakur’s lawyer Kapil Sibal

Lodha panel had told the court: “Supersede the present office-bearers of the Board of Control for Cricket in India (BCCI) with immediate effect and appoint in their place a panel of administrators headed by former Home Secretary G K Pillai to ensure the smooth transition from the old to the new system recommended by the committee”

The key issues over which the Lodha committee and the BCCI are at loggerheads are one vote per state, one person-one post, age cap for office-bearers, and the cooling-off period for them before re-appointment to any key post and appointment of a CAG

During the hearing, Sibal said whatever the apex court was doing was for the betterment of the game but the bench should also allow the board to express themselves. “What the Supreme Court is saying is law and is binding but I may still disagree. That liberty I must have, he said.

To this, the bench shot back, The issue is that whether you (BCCI) are absolutely incapable of implementing the recommendations of the Lodha panel which we have accepted. If a person is to be prosecuted for contempt or perjury, how can he continue? If a person is obstructing implementation of the order, how can he continue? Sibal, however, said, I can place the entire records before the court. I am willing to apologise if the court feel that I am misleading the court. No one can dare to do this with the Supreme Court. On the issue of appointment of observer in BCCI, he said it would not lead to any constructive steps. However, the bench asked Sibal, Do you want to give some names for the panel of observers. Initially, Sibal showed his reluctance but later he said he would take instructions and file a list of names. The bench then asked him to file the list within a week and said it would pass orders on whether to initiate contempt and perjury proceedings against Thakur. At the outset, senior advocate Gopal Subramaniam, who is assisting the court as amicus curiae, told the bench that affidavits filed by Thakur and BCCI Secretary Ajay Shirke clearly showed that the BCCI cannot implement the judgement of the court.