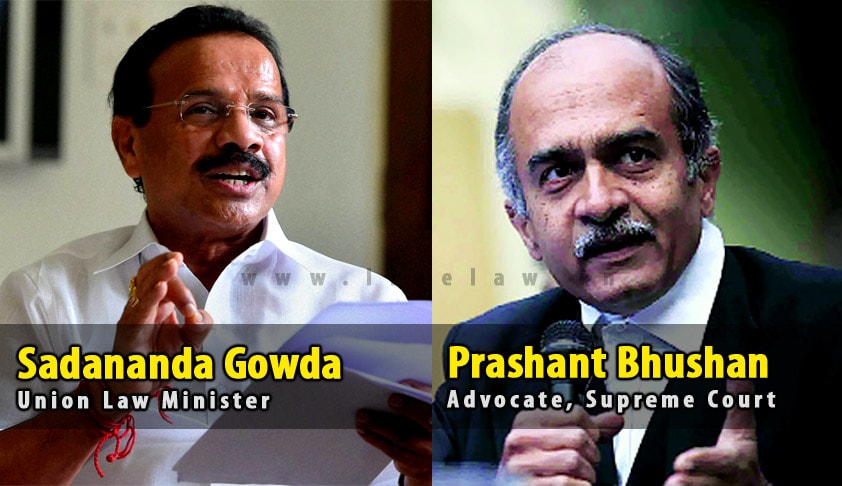 A two Judge Bench of Supreme Court comprising of Justices Lokur and Bodbe, today reserved its order on the pleas filed by Law Minister Sadananda Gowda and a BJP MLA Jeevaraj against the Karnataka High Court verdict quashing the sanction of a five-storey building in Bangalore built in violation of rules. Activist Lawyer Prashant Bhushan appeared for Ms. Nagalakshmi Bai (who had filed the PIL in the High Court).

During the hearing, Bhushan said “the entire events show blatant disregard and violation of the law by a person who is currently the Union Law Minister himself and was at that time the Chief Minister of Karnataka”.

“He (Gowda) made a single building and bifurcated it into two. They are carrying out commercial activity and no law permits them so. Every rule in the lease rule has been violated. Just because he was the Chief Minister at that time every authority was happy to be with him in doing the wrong”, Bhushan argued.

The apex court was hearing the appeals filed by Gowda and former food and civil supplies minister D N Jeevaraj against the 2012 High Court judgment directing the authorities to take back their plots in Bangalore.

“We notice that materials placed before the Court and on examination of the relevant conditions in the lease-cum-sale agreement and the zonal regulations, as modified in accordance with revised master plan 2015, a construction of a multi- storeyed building with or without a plan is not permissible nor can be permitted”, the High Court had said.

Gowda contended that the High Court had committed an error in its order as there was no violation of lease agreement in the initial sanctioned plan.

Bai had said that in 2006 Gowda was allotted a plot under the discretionary quota of the chief minister and later Jeevaraj was also allotted an adjacent site. The duo decided to construct a huge commercial building by amalgamating the two sites. Both filed a joint application with the BDA for amalgamation which was rejected in 2009. She had also said that the duo had amalgamated the two sites even after BDA had rejected an application in this regard. Subsequently, the duo moved the apex court challenging High Court judgment.