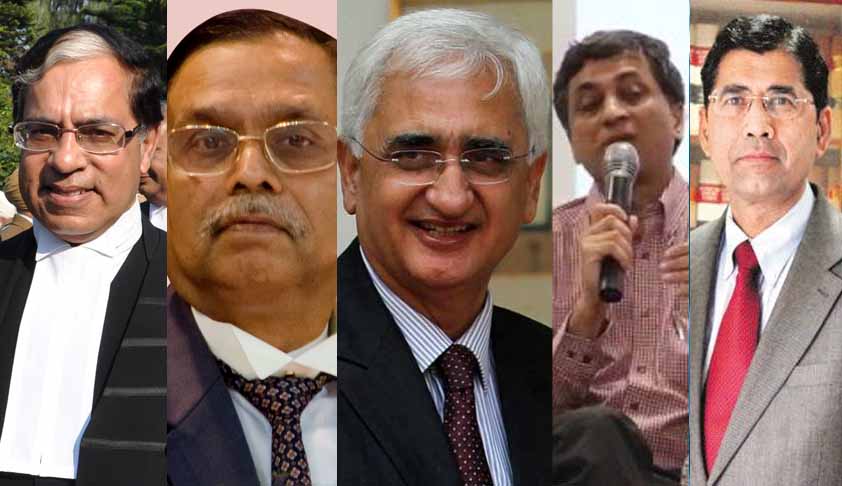 Supreme Court of India on Friday upheld the constitutional validity of Section 139AA of Income Tax Act which made mandatory linkage of  IT returns with Aadhaar. However the Court has partially stayed the operation of the Section subject to the outcome of the Constitution Bench Judgment in the main Aadhaar Case in which the very validity of Aadhaar is challenged. The Bench has made it clear...

Supreme Court of India on Friday upheld the constitutional validity of Section 139AA of Income Tax Act which made mandatory linkage of  IT returns with Aadhaar. However the Court has partially stayed the operation of the Section subject to the outcome of the Constitution Bench Judgment in the main Aadhaar Case in which the very validity of Aadhaar is challenged. The Bench has made it clear that those who don't have Aadhaar need not apply for it for the purpose of filing IT returns. The Court also said that S.139AA has no retrospective effect.

The Bench of Justices AK Sikri and Ashok Bhushan held as follows:

........those who are not PAN holders, while applying for PAN, they are required to give Aadhaar number. This is the stipulation of sub-section (1) of Section 139AA, which we have already upheld. At the same time, as far as existing PAN holders are concerned, since the impugned provisions are yet to be considered on the touchstone of Article 21 of the Constitution, including on the debate around Right to Privacy and human dignity, etc. as limbs of Article 21, we are of the opinion that till the aforesaid aspect of Article 21 is decided by the Constitution Bench a partial stay of the aforesaid proviso is necessary. Those who have already enrolled themselves under Aadhaar scheme would comply with the requirement of sub-section (2) of Section 139AA of the Act. Those who still want to enrol are free to do so. However, those assessees who are not Aadhaar card holders and do not comply with the provision of Section 139(2), their PAN cards be not treated as invalid for the time being. It is only to facilitate other transactions which are mentioned in Rule 114B of the Rules.

We are adopting this course of action for more than one reason. We are saying so because of very severe consequences that entail in not adhering to the requirement of sub-section (2) of Section 139AA of the Act. A person who is holder of PAN and if his PAN is invalidated, he is bound to suffer immensely in his day to day dealings, which situation should be avoided till the Constitution Bench authoritatively determines the argument of Article 21 of the Constitution. Since we are adopting this course of action, in the interregnum, it would be permissible for the Parliament to consider as to whether there is a need to tone down the effect of the said proviso by limiting the consequences.

However, at the same time, we find that proviso to Section 139AA(2) cannot be read retrospectively. If failure to intimate the Aadhaar number renders PAN void ab initio with the deeming provision that the PAN allotted would be invalid as if the person had not applied for allotment of PAN would have rippling effect of unsettling settled rights of the parties. It has the effect of undoing all the acts done by a person on the basis of such a PAN. It may have even the effect of incurring other penal consequences under the Act for earlier period on the ground that there was no PAN registration by a particular assessee. The rights which are already accrued to a person in law cannot be taken away. Therefore, this provision needs to be read down by making it clear that it would operate prospectively

(iii) It is also necessary to highlight that a large section of citizens feel concerned about possible data leak, even when many of those support linkage of PAN with Aadhaar. This is a concern which needs to be addressed by the Government. It is important that the aforesaid apprehensions are assuaged by taking proper measures so that confidence is instilled among the public at large that there is no chance of unauthorised leakage of data whether it is done by tightening the operations of the contractors who are given the job of enrollment, they being private persons or by prescribing severe penalties to those who are found guilty of leaking the details, is the outlook of the Government. However, we emphasise that measures in this behalf are absolutely essential and it would be in the fitness of things that proper scheme in this behalf is devised at the earliest.

The Bench comprising Justice A.K. Sikri and Justice Ashok Bhushan had reserved its judgment last month, on a batch of Petitions alleging that Section 139AA of the Income Tax Act, 1961 was “illegal and arbitrary” and “violative of Articles 14 and 21 of the Constitution”. Section 139AA stipulates that every person, who is eligible to obtain Aadhaar number shall, on or after the 1st day of July, 2017, quote Aadhaar number in the application form for allotment of permanent account number and in the return of income.

One Petition had been filed by Major General (Retd.) Sudhir Vombatkere and Bezwada Wilson, leader of Safai Karamachari Andolan, and another by former Kerala Minister and CPI leader Binoy Viswam.

The Petitioners had relied on various orders of the Supreme Court dated September 23, 2013, March 24, 2014, August 11, 2015, and October 15, 2015, contending that the Apex Court has time and again opined that the scheme is purely voluntary and is to be obtained only after obtaining the consent of an individual.

During the hearings, Attorney General Mukul Rohatgi had led a strong defence, banking on the efficiency of biometric details in preventing duplication. Mr. Rohatgi had further cited a number of instances to submit that there exists no absolute right to bodily integrity. Relying on political philosopher Rousseau, the AG had further argued that the State is like a corporation, and the individuals are its members. There is no harm in using the collective might of the state to provide orderly life, peace, and tranquility, he had suggested.

On the other hand, representing one of the Petitioners, Senior Advocate Shyam Divan had made one of the most compelling arguments on civil liberties in Aadhaar case, by touching upon the constitutionality of the amendment to the Income Tax Act without delving into the privacy aspects of the case.

Mr. Divan had argued on the concept of ‘informational self determination’, citing various rulings of the German Constitutional Court to explain that an individual must have the right to determine what sort of information belonging to him can be used. Mr. Divan had then linked this argument to the right to dignity as guaranteed under Article 21 of the Indian Constitution.

“I know of only one authority which might justify the suggested method of construction: “‘When I use a word,’ Humpty Dumpty said in rather a scornful tone, ‘it means just what I choose it to mean, neither more nor less.’ ‘The question is,’ said Alice, ‘whether you can make words mean so many different things.’ ‘The question is,’ said Humpty Dumpty, ‘which is to be master — that’s all.’” (Through the Looking Glass, c. vi.) After all in this long discussion, the question is whether the words “If a man has” can mean “If a man thinks he has”. I am of opinion that they cannot, and that the case should be decided accordingly,” Mr. Divan had submitted.

It is interesting to note that after the Apex Court had reserved its judgment in the matter, the Centre had issued a notification exempting certain individuals from the requirement of quoting Aadhaar/ Enrolment ID. The exemption had been applied to the following individuals:

You may read: Aadhaar and the Supreme Court’s Sense of Urgency by Gopal Krishna

You may also read: Aadhaar/PAN: SC Judgment Tomorrow, Issues and Options before the Court by Gautam Bhatia