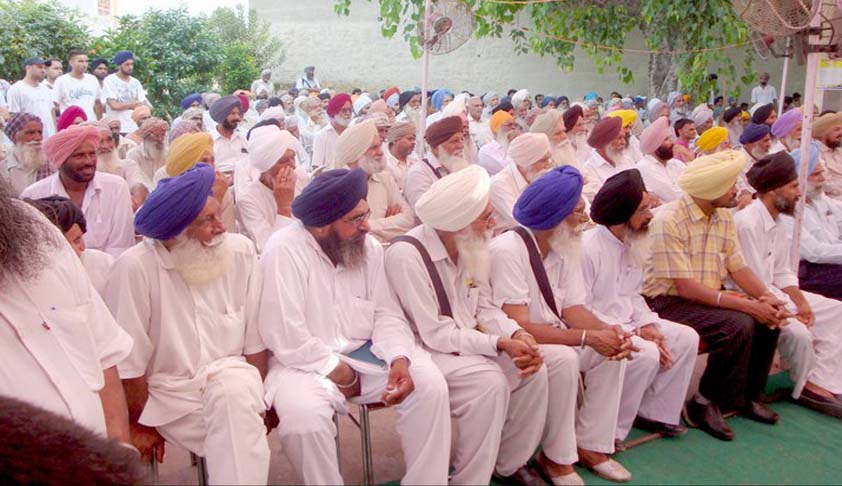 A five Judge Constitution Bench of the Supreme Court on Monday sought Attorney General Mukul Rohatgi’s assistance to decide whether Sikhs are a minority in Punjab. It also appointed Senior Advocate T.R. Andhyarujina as amicus curiae.

“Sikhs don’t seem to qualify for this (minority) status… neither on the basis of their numerical strength, nor on the basis of their financial status,” the Bench, comprising of Chief Justice T.S. Thakur, Justice Ibrahim Kalifulla, Justice S.A. Bobde, Justice A.K. Sikri and Justice R. Banumathi said, issuing a notice returnable in four weeks.

The Court was hearing an appeal filed by the Shiromani Gurudwara Prabandhak Committee (SGPC) challenging a decision of the Punjab and Haryana High Court, regarding reservation for Sikh students within SGPC managed institutes under minority quota.

On December 17, 2007, the Punjab and Haryana High Court had struck down a notification issued by the Punjab government on April 13, 2001 permitting the SGPC to give 50 per cent reservation to Sikh students in colleges run by it on grounds that Sikhs were a minority community.

The High Court had observed that the notification had not applied the requisite parameters for adjudging a group of individuals as minority. It had said, “The country could not be taken as a unit, as has been done. There is no material to substantiate that “Sikhs” are a non-dominant group in Punjab apprehending deprivation of their rights at the hands of “dominant” groups, who may come to power in the State in a democratic election. The notifications are clearly ultra vires the jurisdiction of the State government, violating right of equality and public interest.”

When the case came up for hearing before the Constitution Bench on Monday, there was no advocate to argue from the side of the respondents. Appearing for SGPC, Senior Advocate Rakesh Dwivedi informed the Bench that the contesting parties were students who may not be interested anymore in the outcome of the case, having got admission elsewhere.

SGPC contended before the Court that SGPC’s boundaries are beyond the territory of Punjab and it is also governing religious shrines and educational institutes in other states like Chandigarh, Haryana, Himachal Pradesh etc. However, the Court stated that the SGPC was seeking to defeat the judicial order on this pretext. “The SGPC was formed to manage religious places, not for other roles. Your committee may have a wider role, but your status (minority or majority) will be determined by your population in the state from where you are operating,” the Bench said.

Mr. Dwivedi also drew the Court’s attention to the decision in the case of Bal Patil v. Union of India, wherein a three Judge Bench of the Supreme Court had held that statistical data produced to show that a community is numerically a minority cannot be the sole criterion for such adjudication. The Court had observed, “Minority as understood from constitutional scheme signifies an identifiable group of people or community who were seen as deserving protection from likely deprivation of their religious, cultural and educational rights by other communities who happen to be in majority and likely to gain political power in a democratic form of Government based on election”

“Linguistic and religious minorities are covered by the expression 'minority' under Article 30 of the Constitution. Since reorganization of the States in India has been on linguistic lines, therefore, for purpose of determining the minority, the unit will be the State and not the whole of India. Thus, religious and linguistic minorities, who have been put on par in Article 30, have to be considered statewise,” the Court had further observed.

Senior Advocate K.K. Venugopal, who settled the petition filed by SGPC, was of the view that instead of the country, the State should be the yardstick for the purpose of recognizing minority educational institutions, as held by the 11 Judge Supreme Court Bench in the case of TMA Pai Foundation v. State of Karnataka.