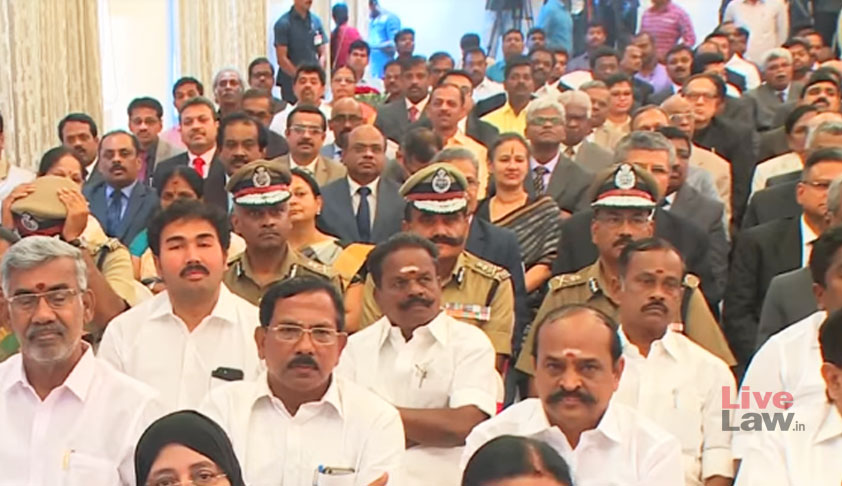 The swearing-in ceremony of Justice Vijaya Kamlesh Tahilramani as the new Chief Justice of Madras High Court has left several judges who attended the ceremony irked due to an apparent protocol oversight.

According to reports, the High Court judges were made to sit behind the Ministers and police officers during the ceremony at the Raj Bhavan on Sunday, when Governor Banwarilal Purohit administered the oath of office to the new Chief Justice

Soon after the event, a statement by Justice M.S. Ramesh began doing the rounds, demanding an explanation from the officials. He wrote, “With a bit of dismay, I am constrained to bring on record the incautious protocol extended to the Judges of the MHC at today’s swearing-in ceremony by the organizers of Raj Bhavan. It was not only a disappointment but an issue of serious concern.

Was the Raj Bhavan unaware of the hierarchy between the Constitutional dignitaries and the police officers? Or is it their understanding that the HC Judges rank below the order of Hon’ble Ministers and Police Officers? Being an official function, there cannot be a second opinion that the protocol to be extended was for the post and not the individual.”

He went on to add that the Raj Bhavan officials not allowing the Registrar General of the High Court to inspect the seating arrangement before the event only fortified the suspicion that this was a “deliberate act of extending a cold shoulder” to the judges of the High Court.

Justice Ramesh further recalled a similar incident during the Meenakshi Thirukalyanam earlier this year, when the judges were asked to give up their seats for politicians, reminding the officials that those concerns have also not been addressed yet.

He confirmed the protocol gaffe to Mohamed Imranullah S. of The Hindu, saying, “I, as an individual, have no problem in being seated anywhere, but I as a judge of the High Court definitely have a problem with the incautious protocol followed today. The judges deserve an explanation from whosoever was responsible for this.”