[Section 377] [Day-1,Session-2] Right To Choose A Partner Is A Fundamental Right Under Art. 21 And Partner Can Be from The Same Sex: Chandrachud.J 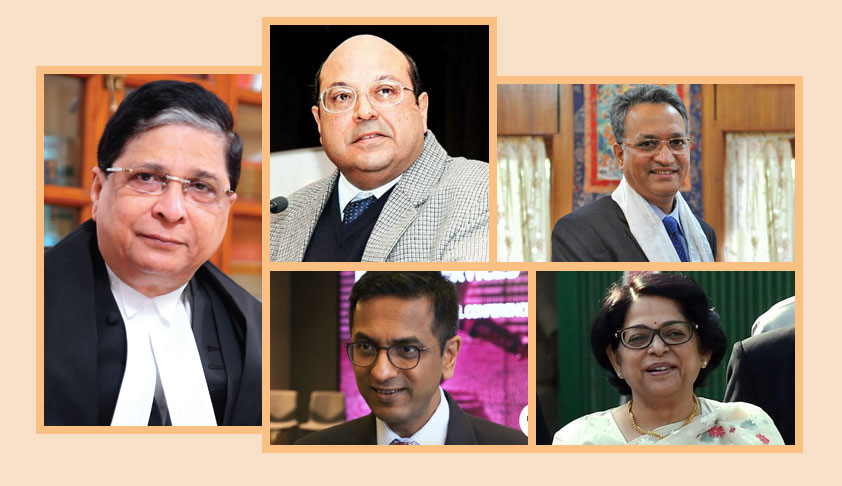 Justice Chandrachud remarked that the right of an adult to choose their sexual partner has been observed to be intrinsic to their fundamental right under Article 21 in the Hadiya Judgment , and that such partner could also possibly be of the same sex.After the bench resumed post the lunch hour, Senior Counsel Arvind Datar traced the history of the laws against homosexuality.He submitted...

Justice Chandrachud remarked that the right of an adult to choose their sexual partner has been observed to be intrinsic to their fundamental right under Article 21 in the Hadiya Judgment , and that such partner could also possibly be of the same sex.

After the bench resumed post the lunch hour, Senior Counsel Arvind Datar traced the history of the laws against homosexuality.

He submitted that Michael Kirby, former Justice of the Australia, has said that the first reference in this behalf appeared in the Old Testament- “If a man ... lie with mankind, as he lieth with a woman, both of them have committed an abomination: they shall surely be put to death; their blood shall be upon you”

“The IPC was the first attempt to codify criminal laws...In Kaushal, this court has said that the IPC reflects the will of the Parliament, while it is a pre-constitution law without any scientific backing...”, he continued.

In the light of Lawrence v. State of Texas and the rising tolerance to homosexuality in America, he quoted that “the widespread consensus in the first half of the twentieth century that homosexuality was pathological and dangerous has given way, with growing numbers of expert and ordinary Americans regarding it as a normal and benign variation of human sexuality...The federal government, which once prohibited the employment of homosexuals, now prohibits its agencies from discriminating against them in employment”.

Mr. Datar criticised the judgment in Suresh Kumar Kaushal in as much as it relies on Ram Krishna Dalmia v. Justice S. R. Tendolkar to apply the principle of presumption of constitutionality to pre-Constitution laws, like the IPC, which have been adopted by the Parliament and used with or without amendment- “Article 372 is also subject to Article 395”, he contended.

“What Article 372(1) really says is that all laws in force prior to the commencement of the Constitution shall continue to be in force until altered or repealed...the Article accords power to the President to direct appropriate adaptation of any law to bring it in consonance with the Constitution within 3 years of its commencement...Now that an adaptation order was not issued by the President, it could be understood to mean that the law is constitutionally valid...”, reflected Justice Chandrachud.

“An entire range of laws would lose the presumptive value of constitutionality”, observed the Chief Justice in context of the Doctrine of Eclipse.

“But it is logically wrong to say that since the Parliament, despite the recommendation of the Law Commission in its 172nd Report, has chosen not to delete section 377, it is constitutional...”, Mr. Datar objected to the observation of the two-judge bench in Suresh Kumar Kaushal.

“Because there were no constitutional constraints when the law was made, that is why the shadow is cast”, opined Justice Nariman.

In what he described as the befitting response to this observation in Suresh Kumar Kaushal, Mr. Datar quoted former US Supreme Court justice Oliver Wendell Holmes Jr.- “It is revolting to have no better reason for a rule of law than that so it was laid down in the time of Henry IV. It is still more revolting if the grounds upon which it was laid down have vanished long since, and the rule simply persists from blind imitation of the past”

Reading clauses (1) and (2) of Article 13 together, he argued that if section 377 was introduced in present day, it would not stand the test of Part III of the Constitution, and hence, the provision, as enacted in 1860, could not either.

“We attach constitutionality to a Law because it is enacted by a legislature the members of which have been elected by popular will, and also because such a law is subject to the umbrella of Part III...these factors attach a degree of deference to post-Constitution laws which would be absent in case of pre-Constitution laws”, weighed in Justice Chandrachud.

In so far as the Suresh Kumar Kaushal judgment factors in the inaction on the part of the Parliament to delete section 377 despite the UOI not having appealed against the Delhi High Court declaring the provision as unconstitutional, Mr. Datar vehemently urged that the fact that there had been no appeal on behalf of the UOI was “all the more reason to strike down section 377”.

Further, in as much as the said judgment interprets section 377 as not criminalising a “particular people or identity or orientation”, but merely identifying certain acts which if committed would constitute an offence, the Senior Advocate controverted, saying that the section criminalises a class of people.

“Classification is not the criterion; the criterion is the act which may be heterosexual, homosexual or even bisexual...nature and choice are different...there is a distinction between natural orientation and cultivated orientation...”, concurred the Chief Justice.

Naming the various theories of punishment, Mr. Datar argued, “what is the objective of awarding punishment? To deter the offender from repeating the wrongful act and also to deter others. My submission is that if this is the natural orientation which manifests at adolescence, how can it be stopped or changed? How can this be covered under a penal statute?”

This led to a discussion between the Senior Counsel and Justices Chandrachud and Nariman on the ‘Alan Turing Law’ enacted in the UK in 2017 to retrospectively exonerate people convicted under homosexuality laws.

“Transgenders have been accorded protection under Article 14. There is no reason why the protection must not be extended on the basis of sexual orientation”, pressed Mr. Datar, citing the test of manifest arbitrariness stipulated in the 2017 judgment in Shayara Bano v. UOI, where the practice of Triple Talaq was declared unconstitutional.

“As far as Article 21 is concerned, right to privacy has now been read into the right to life...privacy may be physical, informational and in the form of decisional autonomy...as a clear deduction from the Justice Puttaswamy judgment, it becomes apparent that the right to sexual orientation is a part of Article 21, and so is the right to choose one’s sexual partner”, he asserted.

Justice Chandrachud remarked that the right of an adult to choose their sexual partner has been observed to be intrinsic to their fundamental right under Article 21 in the Hadiya Judgemnt , and that such partner could also possibly be of the same sex.

Proceeding to discuss the stance of international jurisdictions, Mr. Datar placed reliance on the 1994 Israeli case of El-Al Israel Airlines Ltd. v. Jonathan Danielowitz. The facts of the case were that the first respondent was employed by El-Al as a flight attendant. Under a collective agreement, The airline gave every permanent employee a free aero-plane ticket, every year, for that employee and his/her spouse or publically-recognised companion. However, El-Al had refused to give the first Respondent a free ticket for his same-sex partner. “...there can be, I think, be no doubt that the discrimination in this case is based on the ‘sexual orientation’ of the (permanent) employee. This discrimination — against homosexuals and lesbians — is improper. It is contrary to equality...”, Vice President A. Barak had noted in that case.

Next, he cited the ruling of the European Court of Human Rights in the Case of Dudgeon v. The UK (1981), where the provisions criminalising certain homosexual acts between consenting adult males, in force in Northern Ireland, were examined.

It was noted, “...as compared with the era when that legislation was enacted, there is now a better understanding, and in consequence an increased tolerance, of homosexual behaviour to the extent that in the great majority of the member States of the Council of Europe it is no longer considered to be necessary or appropriate to treat homosexual practices, of the kind now in question, as in themselves a matter to which the sanctions of the criminal law should be applied; the Court cannot overlook the marked changes which have occurred in this regard in the domestic law of the member States...”

At this point, Justice Indu Malhotra intervened to say that the British Prime Minister, in a speech, has recommended that all the colonies should consider eliminating laws criminalising homosexuality.

Mr. Datar also quoted from Justice Devindra Rampersad’s observations in Jason v. the Attorney General of Trinidad and Tobago (2018). The judge had, in determining whether the State has the constitutional authority to criminalise sexual relations between consenting adults, leaned heavily on the Indian Supreme Court’s Justice K. S. Puttaswamy.

In this behalf, he relied on the 1997 judgment of the Supreme Court of India in Malpe Vishwanath Acharya & Ors v. State Of Maharashtra where the the validity of the relevant provisions of the Bombay Rents, Hotel and Lodging House Rates Control Act, 1947 was considered.

“A belief which represented unquestioned orthodoxy in year X may have become questionable by year Y and unsustainable by year Z”, he recited from the 1995 European case of R v. Ministry of Defence, where The Ministry’s policy that "homosexuality is incompatible with service in the armed forces” was challenged.