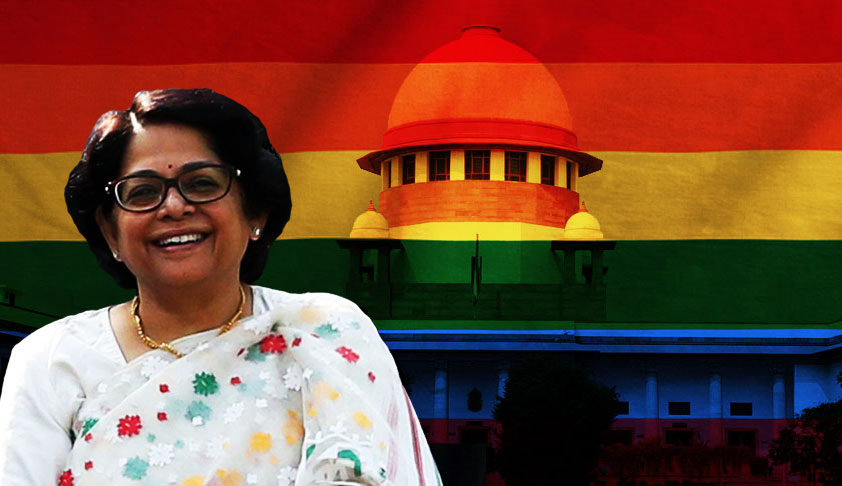 Shyam Divan, Senior Advocate, began the arguments on Day 3 of the hearing in the challenge to the constitutionality of section 377 of the IPC.  He urged before the Supreme Court five judge bench that Article 14 envisages a positive act on the part of the State to secure equality to the LGBT community.The argument was developed by referring to  2017 ‘Triple Talaq’ judgment (Shayara Bano...

Shyam Divan, Senior Advocate, began the arguments on Day 3 of the hearing in the challenge to the constitutionality of section 377 of the IPC.  He urged before the Supreme Court five judge bench that Article 14 envisages a positive act on the part of the State to secure equality to the LGBT community.

The argument was developed by referring to  2017 ‘Triple Talaq’ judgment (Shayara Bano v. UOI), where Justice Rohinton Nariman has dealt with the two facets of Article 14- ‘equality before law’, adopted from the UK  and ‘equal protection of the law’, rooted in the 14th Amendment to the US constitution, having a positive content. It was observed that the concomitant of the latter is that if an action is found to be arbitrary and, therefore, unreasonable, it would negate the equal protection of the law contained in Article 14 and would be struck down on this ground.

Hammering the point further, he relied on Justice Vivian Bose’s opinion in State of West Bengal v. Anwar Ali Sarkar (1952), urging that a positive declaration be made by the court to the effect that there may be no discrimination on the basis of sexual orientation in matters of employment, healthcare, housing, education and under Article 15(2).

He discussed the 1998 ruling of the Constitutional Court of South Africa in the National Coalition for Gay and Lesbian Equality v. Ministry of Justice, where the constitutionality of the country’s Sexual Offences Act and anti-sodomy provisions was adjudged by considering discrimination on the basis of sexual orientation as violative of the Bill of Rights.

On Thursday also, Mr. Diwan reiterated that the right to intimacy be expressly read into Article 21.

He also criticised the “re-crimininalisation” of homosexuality by the Supreme Court in Suresh Kumar Kaushal (2013).

Next, Senior Advocate C. U. Singh, appearing on an intervention application, addressed the medical concerns associated with this criminalisation.

Justice Indu Malhotra noted that on account of family pressure and the societal stigma, homosexuals are unable to acknowledge their sexual orientation which results in the spurt of bisexuality.  She also remarked that homosexuality is not an unsoundness, but only a variation of sexuality, given that it transpires even among animals.

In context of the ordeals of accessing health care, Justice Malhotra observed that in certain cases, even doctors do not maintain confidentiality, while Justice D. Y. Chandrachud indicated section 21(1)(a) of the Mental Healthcare Act of 2017  barred discrimination on the basis of sexual orientation in the provision of mental health facilities.

Mr. Singh contended since that the Parliament  has already recognised the right of the LGBT community to mental health under the 2017 Mental Healthcare Act, the same should be extended in all arenas.

Justice Nariman termed section 30 of the Mental Healthcare Act, obligating the government to create awareness of about mental health and reduce stigma associated with mental illness, as relevant in this context

While the Chief Justice remarked that stigma the community faces is imputable to the criminalisation of their natural orientation, Justice Chandrachud concurred that we are responsible for the society that perpetrates discrimination against the LGBT community.

He Mentioned how it has now been legitimised in England and how India was regarded as a liberal place by Europeans once, as compared to the Victorian moral codes which had governed them. To drive in that homosexuality has been a part of Indian culture since ancient times, he referred the bench to the book ‘Shikhandi and Other Tales They Don’t Tell You’ by Devdutt Patnaik.

That section 377 affects only a sexual minority is no ground to retain the provision, was his contention.

Stressing on the significance of ‘fraternity’ in the light of the day-to-day tribulations of the LGBT community, he placed reliance on inter alia the apex court judgment in Subramanian Swamy v. UOI (2016).

He also stated that former Chief Justice Leila Seth had remarked in an article  the 2013 Suresh Koushal judgment made her gay son a criminal before law.

“Homosexual love is unselfish. Just that they do not want to procreate”, was his passionate plea.

In his turn, Senior Advocate Krishnan Venugopal argued that section 377 qualifies as a means to suppress alternate sexuality.

Although prima facie it may seem to attack particular behaviour, the provision actually represses identity, he contended. He elaborated on how homosexuals abstain from approaching the police for the fear of prosecution on revealing their identity.

In the light of Article 1 of the UN Declaration of Human Rights, It was his submission that Section 377 curtails the freedom of expression and conscience of the LGBT community under Articles 19(1)(a) and 25 respectively.

Mentioning how Lord Macaulay was repulsed by the contents of section 377, he relied on the Naz Foundation judgment (2009) to advance that constitutional morality should prevail over social morality.

ASG Tushar Mehta suggested that contents of the book by Devadutt Patanaik may not be heeded as the constitutionality of a statutory provision cannot be adjudged based on individual perceptions.

In response to an advocate favouring the retention of section 377, on account of the societal opinion being averse to homosexuality, Chief Justice Misra affirmed that the decision of the court is determined by constitutional morality and not majoritarian morality.

When it was insisted that public opinion be sought before a call is taken, the Chief Justice repeated that constitutional questions cannot be resolved by a recourse to referendum.

The hearing also witnessed such contentions that homosexuality is conspicuous only among lower level animals, and that ‘sexual intercourse’ is distinguishable from ‘carnal intercourse’.

The ‘order of nature’ confines sexual activity to peno-vaginal intercourse, and when organs not intended for procreation are used for the purpose of sexual pleasure, such an act stands in violation of the ‘order of nature’, it was asserted.

Advocate Manoj George, appearing on behalf of two Christian associations, had also criticised the “U-turn” resorted to by the Centre in the present batch of petitions, considering its earlier stand in Suresh Kumar Kaushal.

It may be noted that on Wednesday the UOI had refused to oppose the challenge to section 377, leaving it to the “wisdom of the court”. The ASG repeated this stand of the Centre.

Justifying the move, Justice A. M. Khanwilkar observed that recent development, by way of the 2017 Justice K. S. Puttuswamy judgment on the right to privacy, had to be factored in. Justice Chandrachud also objected to the claim of ‘U-Turn’ in view of the Centre not having appealed against the Delhi High Court striking down section 377 in 2009.

Mr. George persisted, saying that certain private bills seeking the scrapping of section 377 had not found support in the Parliament, and that the states had not exercised their power under the Concurrent List to amend the IPC to read down the provision.

The Chief Justice dismissed these claims as being irrelevant, which could not stall the court from examining the validity of the impugned provision on the touchstone of Part III rights.

The hearing will resume on Tuesday.