[Section 377] [Day-2,Session-1] We Want The Relationships To Be Protected From Moral Policing : Justice Chandrachud 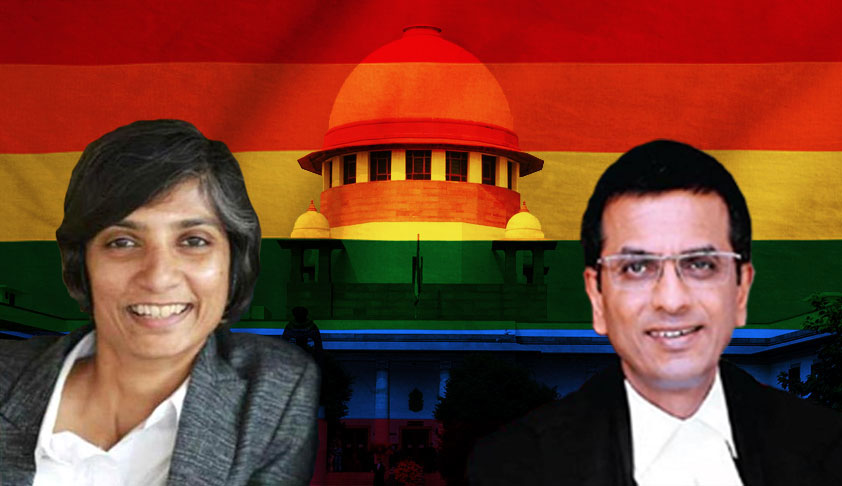 On Day 2 of the hearing on the challenge to the constitutionality of section 377 of the IPC, ASG Tushar Mehta submitted the Centre’s affidavit before the Supreme Court five judge bench, clarifying its stand to not contest the petitions, leaving the decision to the wisdom of the court.However, the ASG proceeded to voice his personal apprehension in the light of the observation made by Justice...

On Day 2 of the hearing on the challenge to the constitutionality of section 377 of the IPC, ASG Tushar Mehta submitted the Centre’s affidavit before the Supreme Court five judge bench, clarifying its stand to not contest the petitions, leaving the decision to the wisdom of the court.

However, the ASG proceeded to voice his personal apprehension in the light of the observation made by Justice D. Y. Chandrachud on Tuesday that in as much as the right to choose one’s sexual partner has been recognised in the Hadiya case, such right could also possibly be extended to include a partner of the same-sex.

“This may encourage other forms of sexual perversions such as incest, and relationships within the ‘prohibited degrees’ and between ‘sapindas’ which are restricted under the Hindu Marriage Act (of 1955)...one may say that his choice of sexual partner is his sister...”, iterated Mr. Mehta, requesting a clarification of the judgment in Shafin Jahan v. UOI in this respect.

“Such a marriage would be null and void”, noted Chief Justice Misra, addressing the ASG’s fears.

“Somebody accused of bestiality may say that it their sexual orientation...please clarify...”, continued Mr. Mehta.

“There is no Fundamental Right to sexual orientation but only to the choice of sexual partner”, remarked Justice Chandrachud, adding that the scope was limited to the mainstream orientation in respect of which the history has spoken. “We are on consensual sex between adults...”, stated the Chief Justice, conveying that the bar on incest and bestiality stood.

When the ASG mentioned the issues of marriage, adoption, maintenance and inheritance in context of same-sex relationships, the Chief Justice repeated, “the conferment of any kind of status shall be subsequent to the lis...section 377 deals with the crime and not the lis...Children cannot consent. Two consenting adults engaging in such activity will not be held guilty under the criminal law is what we are determining”

“Our focus is not only on the sexual act, but the relationship between two consenting adults and the manifestation of their rights under Articles 14 and 21...we are dwelling on the nature of relationship and not marriage...we want the relationship to be protected under Fundamental Rights and to not suffer moral policing”, observed Justice Chandrachud.

The ASG rested his case, pleading that no observations may be made in respect of civil and property rights.

Thereupon, Advocate Saurabh Kirpal resumed his submissions, relying on the judgments in NALSA and Justice K. S. Puttaswamy to depict the existence of the Fundamental Rights; and on the Shakti Vahini (honour killings) and Hadiya cases to show the contents of the rights under Articles 14, 19 and 21 as including the right to choose one’s sexual partner.

“The sexual part of a relationship is very important, but the relationship is more than mere performance of the sexual act...”, reflected Justice Chandrachud in context of the interpretation under Article 21.

Thereupon, Advocate Maneka Guruswamy commenced her arguments on behalf of 20 IIT students and alumni, addressing the violation by the impugned provision of Articles 14, 15, 19 and 21.

She stressed on how section 377 curtails the freedom of expression and the right to form associations under clauses (a), (b) and (c) of Article 19 of a sexual minority.

In context of the infringement of Article 15, she cited the 1961 apex court judgment in Sakal Paper v. UOI, in so far as it was observed therein, “it must be borne in mind that the Constitution must be interpreted in a broad way and not in a narrow and pedantic sense. Certain rights have been enshrined in our Constitution as fundamental and, therefore, while considering the nature and content of those rights the Court must not be too astute to interpret the language of the Constitution in so literal a sense as to whittle them down...”

She quoted the American Supreme Court Justice Kennedy in Obergefell v. Hodges, in his majority opinion legalising same-sex marriages- “the generations that wrote and ratified the Bill of Rights and Fourteenth Amendment did not presume to know the extent of freedom in all its dimensions, and so they entrusted to future generations a charter protecting the right of all persons to enjoy liberty as we learn its meaning”.

“Section 377 involves sex-based stereotype which was forbidden in Anuj Garg v. Hotel Association of India (where the employment of males below the age of 25 years and females as bartenders was considered in 2007)”, contended Ms. Guruswamy.

Further, to address the concerns of proportionality, she quoted the test of manifest arbitrariness as laid down in Shayara Bano (2017), where the practice of Triple Talaq was struck down as unconstitutional.

She cited the Canadian Supreme Court in Egan, with the majority regarding sexual orientation as a “deeply personal characteristic that is either unchangeable or changeable only at unacceptable personal costs” and that any discrimination on this ground was analogous to discrimination on the grounds enumerated in section 15 of the Canadian Charter of Rights and Freedoms.

Continuing in the same thread, she indicated the judgment of the South African Constitutional Court in National Coalition for Gay and Lesbian Equality v. Ministry of Justice (1998).

Moving on, she quoted from Jeeja Ghosh v. UOI (2016)- “discrimination occurs due to arbitrary denial of opportunities for equal participation”

When the Chief Justice inquired if there was any statutory provision perpetrating such discrimination, Ms. Guruswamy indicated the All India Services (Discipline and Appeal) Rules of 1969.

There was a discussion with the Chief Justice and Justice Chandrachud on the striking down of section 377 and its impact on such “by-products” as these Rules.

Finally, Ms. Guruswamy referred to the position statement issued by the Indian Psychiatric Society on July 2, declaring that homosexuality is not a Psychiatric disease. She added that the WHO had removed it as a Psychiatric disorder back in 1973.

She submitted that this not only about sexual acts, but the love that must be

“Navtej Singh Johar (one of the petitioners) has been with his partner for 24 years...Amarnath’s (another petitioner) partner of 26 years has passed away and not present to witness this hearing...Sunil Mehra (petitioner) had cleared the IAS but did not join, owing to the fear that is generated by this policy...their lives are passing by...”, she urged passionately, reciting Senior Counsel Mukul Rohatgi’s plea from Tuesday.