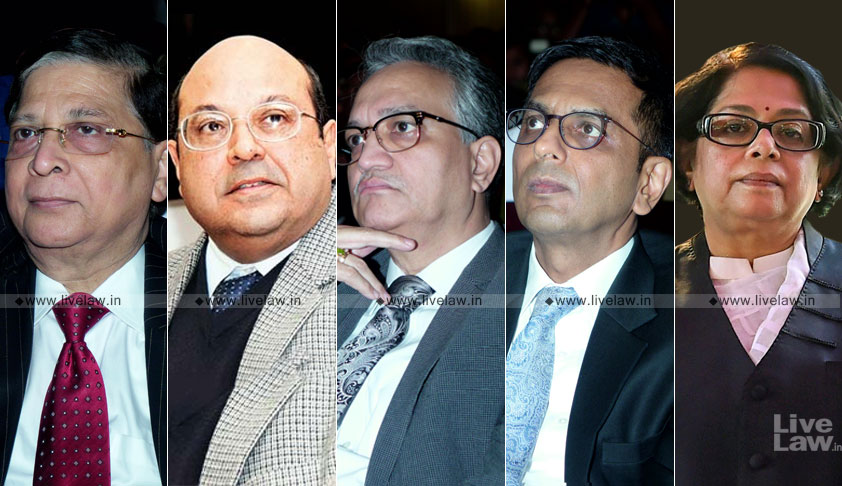 A Five Judge Constitution Bench of the Supreme Court on Thursday pronounced Judgment on a batch of petitions challenging the constitutional Validity of Section 377 IPC.CJI DIPAK MISRA AND KHANWILKARReliance on the NALSA judgment to highlight connection between human rights and constitutional guarantee of right to life and liberty with dignityThe eminence of identity which has been lucently...

A Five Judge Constitution Bench of the Supreme Court on Thursday pronounced Judgment on a batch of petitions challenging the constitutional Validity of Section 377 IPC.

The eminence of identity which has been lucently stated in the NALSA case very aptly connects human rights and the constitutional guarantee of right to life and liberty with dignity. With the same spirit, we must recognize that the concept of identity which has a constitutional tenability cannot be pigeon-holed singularly to one‘s orientation as it may keep the individual choice at bay. At the core of the concept of identity lies self-determination, realization of one‘s own abilities visualizing the opportunities and rejection of external views with a clear conscience that is in accord with constitutional norms and values or principles that are, to put in a capsule, ―constitutionally permissible.

View in Suresh Kaushal judgment “impermissible”
In Suresh Koushal (supra), this Court overturned the decision of the Delhi High Court in Naz Foundation (supra) thereby upholding the constitutionality of Section 377 IPC and stating a ground that the LGBT community comprised only a minuscule fraction of the total population and that the mere fact that the said Section was being misused is not a reflection of the vires of the Section. Such a view is constitutionally impermissible. The Winning Team Of Lawyers

Progressive interpretation of the Indian Constitution
Our Constitution is a living and organic document capable of expansion with the changing needs and demands of the society. The Courts must commemorate that it is the Constitution and its golden principles to which they bear their foremost allegiance and they must robe themselves with the armoury of progressive and pragmatic interpretation to combat the evils of inequality and injustice that try to creep into the society. The role of the Courts gains more importance when the rights which are affected belong to a class of persons or a minority group who have been deprived of even their basic rights since time immemorial.

Transformative constitutionalism dissuades discrimination
The primary objective of having a constitutional democracy is to transform the society progressively and inclusively. Our Constitution has been perceived to be transformative in the sense that the interpretation of its provisions should not be limited to the mere literal meaning of its words; instead they ought to be given a meaningful construction which is reflective of their intent and purpose in consonance with the changing times. Transformative constitutionalism not only includes within its wide periphery the recognition of the rights and dignity of individuals but also propagates the fostering and development of an atmosphere wherein every individual is bestowed with adequate opportunities to develop socially, economically and politically. Discrimination of any kind strikes at the very core of any democratic society. When guided by transformative constitutionalism, the society is dissuaded from indulging in any form of discrimination so that the nation is guided towards a resplendent future.

Discrimination on the basis of sexual orientation violative of fundamental right of freedom of expression
Sexual orientation is one of the many biological phenomena which is natural and inherent in an individual and is controlled by neurological and biological factors. The science of sexuality has theorized that an individual exerts little or no control over who he/she gets attracted to. Any discrimination on the basis of one’s sexual orientation would entail a violation of the fundamental right of freedom of expression.

Concept of identity sacred
Autonomy is individualistic. Under the autonomy principle, the individual has sovereignty over his/her body. He/she can surrender his/her autonomy wilfully to another individual and their intimacy in privacy is a matter of their choice. Such concept of identity is not only sacred but is also in recognition of the quintessential facet of humanity in a person's nature. The autonomy establishes identity and the said identity, in the ultimate eventuate, becomes a part of dignity in an individual.

Absence of concept of consent under Section 377
A cursory reading of both Sections 375 IPC and 377 IPC reveals that although the former Section gives due recognition to the absence of “wilful and informed consent” for an act to be termed as rape, per contra, Section 377 does not contain any such qualification embodying in itself the absence of “wilful and informed consent” to criminalize carnal intercourse which consequently results in criminalizing even voluntary carnal intercourse between homosexuals, heterosexuals, bisexuals and transgenders. Section 375 IPC, after the coming into force of the Criminal Law (Amendment) Act, 2013, has not used the words “subject to any other provision of the IPC”. This indicates that Section 375 IPC is not subject to Section 377 IPC.

Discrimination and unequal treatment to the LGBT community violative of Article 14
(xiv)An examination of Section 377 IPC on the anvil of Article 14 of the Constitution reveals that the classification adopted under the said Section has no reasonable nexus with its object as other penal provisions such as Section 375 IPC and the POCSO Act already penalize non-consensual carnal intercourse. Per contra, Section 377 IPC in its present form has resulted in an unwanted collateral effect whereby even “consensual sexual acts”, which are neither harmful to children nor women, by the LGBTs have been woefully targeted thereby resulting in discrimination and unequal treatment to the LGBT community and is, thus, violative of Article 14 of the Constitution.

Section 377 arbitrary, subjects LGBT community to “societal pariah and dereliction”
Section 377 IPC, so far as it criminalises even consensual sexual acts between competent adults, fails to make a distinction between non-consensual and consensual sexual acts of competent adults in private space which are neither harmful nor contagious to the society. Section 377 IPC subjects the LGBT community to societal pariah and dereliction and is, therefore, manifestly arbitrary, for it has become an odious weapon for the harassment of the LGBT community by subjecting them to discrimination and unequal treatment. Therefore, in view of the law laid down in Shayara Bano (supra), Section 377 IPC is liable to be partially struck down for being violative of Article 14 of the Constitution.

Article 19(1)(a): Section 377 places unreasonable restriction
(xvi)An examination of Section 377 IPC on the anvil of Article 19(1)(a) reveals that it amounts to an unreasonable restriction, for public decency and morality cannot be amplified beyond a rational or logical limit and cannot be accepted as reasonable grounds for curbing the fundamental rights of freedom of expression and choice of the LGBT community. Consensual carnal intercourse among adults, be it homosexual or heterosexual, in private space, does not in any way harm the public decency or morality. Therefore, Section 377 IPC in its present form violates Article 19(1)(a) of the Constitution.

Persons who are homosexual have a fundamental right to live with dignity, which, in the larger framework of the Preamble of India, will assure the cardinal constitutional value of fraternity that has been discussed in some of our judgments (See (1) Nandini Sundar v. State of Chhattisgarh, (2011) 7 SCC 547 at paragraphs 16, 25 and 52; and (2) Subramaniam Swamy v. Union of India (2016) 7 SCC 221 at paragraphs 153 to 156).

We further declare that such groups are entitled to the protection of equal laws, and are entitled to be treated in society as human beings without any stigma being attached to any of them.

We further declare that Section 377 insofar as it criminalises homosexual sex and transgender sex between consenting adults is unconstitutional.

We are also of the view that the Union of India shall take all measures to ensure that this judgment is given wide publicity through the public media, which includes television, radio, print and online media at regular intervals, and initiate programs to  reduce and finally eliminate the stigma associated with such persons.

Above all, all government officials, including and in particular police officials, and other officers of the Union of India and the States, be given periodic sensitization and awareness training of the plight of such persons in the light of the observations contained in this judgment.

(i)Section 377 of the Penal Code, in so far as it criminalises consensual sexual conduct between adults of the same sex, is unconstitutional;

(ii) Members of the LGBT community are entitled, as all other citizens, to the full range of constitutional rights including the liberties protected by the Constitution;

(iii) The choice of whom to partner, the ability to find fulfillment in sexual intimacies and the right not to be subjected to discriminatory behaviour are intrinsic to the constitutional protection of sexual orientation;

(iv) Members of the LGBT community are entitled to the benefit of an equal citizenship, without discrimination, and to the equal protection of law;

i. It is declared that insofar as Section 377 criminalises consensual sexual acts of adults (i.e. persons above the age of 18 years who are competent to consent) in private, is violative of Articles 14, 15, 19, and 21 of the Constitution. It is, however, clarified that such consent must be free consent, which is completely voluntary in nature, and devoid of any duress or coercion.

ii. The declaration of the aforesaid reading down of Section 377 shall not, however, lead to the reopening of any concluded prosecutions, but can certainly be relied upon in all pending matters whether they are at the trial, appellate, or revisional stages.

iii. The provisions of Section 377 will continue to govern non-consensual sexual acts against adults, all acts of carnal intercourse against minors, and acts of beastiality.