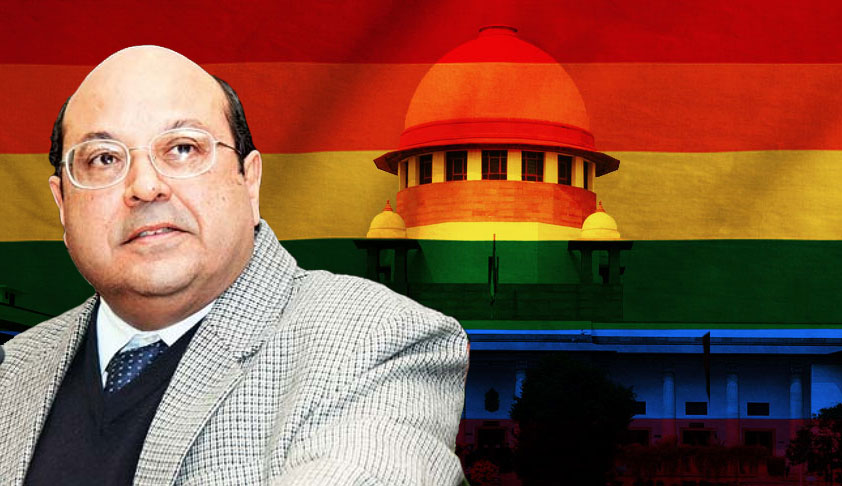 “The whole object of fundamental rights is to give court power to strike down laws which a majoritarian government, swung by votes, will not repeal. We don’t wait for majoritarian governments to repeal laws. If a law is unconstitutional, it is the duty of the court to strike it down", Justice Nariman, on Day 4, Section 377 hearing.On Day 4 of the hearing in the challenge to...

On Day 4 of the hearing in the challenge to the constitutionality of criminalization of homosexuality, Advocate Manoj George resumed his submissions in favour of retaining the provision.

Appearing on behalf of two Christian organisations, he contended before the Supreme Court five judge bench that the Yogyakarta Principles, from which the concept of sexual orientation is derived, are not a treaty and hence, have no validity.

In response, Justice Rohinton Nariman indicated paragraph 60 of the NALSA judgment to back their applicability, in so far as it was hinted in the decision that ‘sexual orientation’ is a part of ‘sex’ in Article 15, based on the Yogyakarta principles.

“Only indicative value is to be assigned to ‘sexual orientation’.The concept includes not just the LGBT, but there are as many as 30-35 categories- now there is ‘Q’ (standing for the ‘Queer’), there is menosexual. So when ‘sex’ is replaced by ‘sexual orientation’, what are we saying it incorporates?”, persisted Mr. George.

“We have already expanded ‘sex’ to include transgenders. Here, we are interpreting the constitution and not an ordinary statute. Words must lead to principles”, said Justice Nariman.

When Mr. George questioned the value of the Yogyakarta principles in view of India not being a signatory, Chief Justice Dipak Misra noted, “India may not be the signatory to a treaty but if its principles fit into the constitutional sphere, the court can rely on it”

“But these principles were only evolved by an assembly of NGOs that decided that these should be guiding principles for 29 nations, not the whole world”, argued Mr. George.

When Justice Nariman inquired about the value of involvement of the International Commission of Jurists in the development of the principles, the advocate advanced that the same is not a statutory body but only a private set-up.

“The principles may not be binding on us, but if they find a place in our Parts III or IV, they can be relied on. Also, if Article 15 is read with Articles 19 and 21, sex is not merely sexual identity but also sexual orientation”, weighed in the Chief Justice.

“Sexual orientation is not defined anywhere. We cannot import another abstract concept as ‘carnal intercourse’ and ‘order of nature'.”, contended George.

He submitted that section 377 contemplates two situations- of carnal intercourse within the order of nature, and of that which is against the order of nature. “This classification is reasonable and based on an intelligible differentia”, he advanced.

"The element of consent is missing in section 377. The acts referred to in it are an offence irrespective of whether engaged in with or without consent”, Mr. George attempted to hammer in his argument. His argument was that the Court cannot add words to a section under the guise of interpretation, and hence the concept of 'consent' should not be imported to Section 377.

Observing the concept of consent was not alien to the provision, Justice Nariman referred to sections 361 and 362 of Lord Macaulay’s original draft of the penal code awarding lesser punishment for unnatural offences committed with consent.

Justice D. Y. Chandrachud also quizzed the counsel on the interpretation of the term ‘carnal’- “Carnal means lust. You suggested every sexual intercourse involves lust between the participants. So ‘carnal intercourse’ has no distinct meaning as per you?”

Manoj George also contended that there was no scientific basis for the argument that sexual orientation was innate in a person from birth . " People who may show same-sex attraction during adolescence may change their orientation later on ", he submitted. He also pointed out that unnatural sex was treated as a ground for divorce under the Parsi Marriage Act and Divorce Act. At this point, Justice Nariman clarified that unnatural sex could be held as covering only bestiality and sexual acts with minors, exempting all sorts of sexual activities between consenting adults.

When George submitted that Courts cannot alter laws as it was reserve of the legislature, the Court responded that it was the duty of the judiciary to strike down a statute if it is found to be unconstitutional. Justice Nariman quoted the following words of Justice Robert Jackson of US Supreme Court in West Virginia Board of Education v. Barnette , "The very purpose of a Bill of Rights was to withdraw certain subjects from political controversy. One’s fundamental rights may not be submitted to vote; they depend on the outcome of no elections.

Justice Nariman also cited the case of Alan Turing, a prodigious English mathematician, who was punished for homosexuality. He had to opt for chemical castration in lieu of imprisonment, and eventually committed suicide.

Then, Manoj George submitted that legitimising homosexuality might lead to spread of STDs like HIV/AIDS. He added thatSuresh Kumar Kaushal judgment had discussed this aspect in depth. But the bench was not at all impressed by this line of argument. The Bench stated that giving legal recognition to homosexuality will equip the State more to spread awareness among homosexuals regarding STDs, and will also remove the inhibitions of homosexuals to seek medical aid.

“If you shove it(homosexuality) under carpet citing some Victorian-era morality, it will only lead to health concerns”, Justice Nariman responded