Section 497 Was Never Intended To Preserve ‘Sanctity Of Marriage’; It Demeans Or Degrades The Status Of A Woman By Likening Her To A Chattel: Justice RF Nariman [Read Judgment] 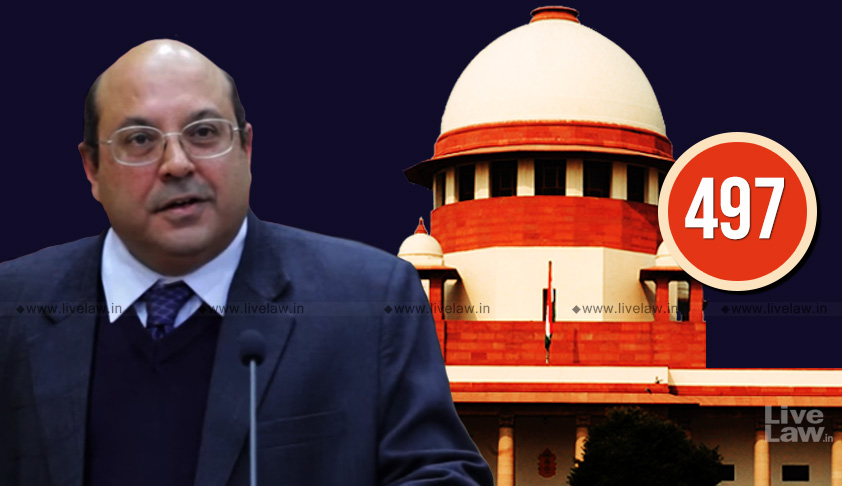 “What is clear, therefore, is that this archaic law has long outlived its purpose and does not square with today‘s constitutional morality, in that the very object with which it was made has since become manifestly arbitrary, having lost its rationale long ago and having become in today‘s day and age, utterly irrational.”Justice Rohinton Fali Nariman, in his concurring judgment in...

“What is clear, therefore, is that this archaic law has long outlived its purpose and does not square with today‘s constitutional morality, in that the very object with which it was made has since become manifestly arbitrary, having lost its rationale long ago and having become in today‘s day and age, utterly irrational.”

Justice Rohinton Fali Nariman, in his concurring judgment in Joseph Shine vs. Union of India, has declared that Section 497 of the Indian Penal Code, 1860 and Section 198 of the Code of Criminal Procedure, 1973 are violative of Articles 14, 15(1), and 21 of the Constitution of India.

Justice Nariman observed that marital stability is not the object for which this provision penalising adultery was enacted. He rejected the Central government’s argument that it is intended to protect and preserve the sanctity of marriage. He has further held that Section 497 is all about proprietary interest of a married man in his wife; and it demeans or degrades the status of a woman by likening her to a chattel.

It’s About Proprietary Interest Of Married Man In His Wife

Justice Nariman starts his judgment by making a distinction between offences of adultery and bigamy (Section 494.) He takes note that the offence of bigamy is punishable with a longer jail term than adultery.

“It will be noticed that the crime of adultery punishes only a third-party male offender as against the crime of bigamy, which punishes the bigamist, be it a man or a woman. What is therefore punished as “adultery” is not “adultery” per se but the proprietary interest of a married man in his wife,” he observed.

Most Religions Punished Adultery, It is Not A Crime In Many Nations

Taking note of instances from texts of Judaism, Christianity, Islam and Hinduism Justice Nariman observes that almost all ancient religions/civilizations punished the sin of adultery.

Justice Nariman also reproduces a passage from a judgment delivered by the Supreme Court of Namibia on the issue whether the criminal offence of adultery would protect marriages and reduce the incidence of adultery. He also observed that only a very few nations continue to treat adultery as a crime, though most nations retain adultery for the purposes of divorce laws. “The People’s Republic of China, Japan, Brazil, New Zealand, Australia, Scotland, the Netherlands, Denmark, France, Germany, Austria, the Republic of Ireland, Barbados, Bermuda, Jamaica, Trinidad and Tobago, Seychelles etc. are some of the jurisdictions in which it has been done away with. In South Korea and Guatemala, provisions similar to Section 497 have been struck down by the constitutional courts of those nations.”

He also notes that it continues to be a criminal offence in Afghanistan, Bangladesh, Indonesia, Iran, Maldives, Nepal, Pakistan, Philippines, the United Arab Emirates, some states of the United States of America, Algeria, Democratic Republic of Congo, Egypt, Morocco, and some parts of Nigeria.

In this judgment, the Supreme Court through Justice Vivian Bose had held that the last part of Section 497, which states that the wife shall not be punishable as an abettor of the offence of adultery, does not offend Articles 14 and 15 in view of the saving provision contained in Article 15(3), being a special provision made in favour of women.

Justice Nariman terms this logic is an instance of ‘Homer nodding’. He disagrees with the application of Article 15(3), (nothing in this article shall prevent the State from making a special provision for women, to Section 497 IPC, which is an ‘existing law’).

“Existing law” as being separate from “the State making any law”

He observes: “Section 497 is, in constitutional language, an “existing law” which continues, by virtue of Article 372(1), to apply, and could not, therefore, be said to be a law made by the “State” meaning any of the entities referred to above.”

The judge also observes that the ratio in Yusuf Abdul Aziz does not extend to upholding the entirety of the provision or referring to any of the arguments made before us for striking down the provision as a whole.

Justice Nariman also takes note of judgment (impugned judgment in Yusuf Abdul Aziz) rendered by the then Bombay High Court Chief Justice Chagla who had stated that since the underlying idea of Section 497 is that wives are properties of their husbands, Section 497 should not find a place in any modern Code of law, and is an argument in favour of doing away with Section 497 altogether. “The day has long since arrived when the Section does, in fact, need to be done away with altogether, and is being done away with altogether,” he remarks.

What Does Not Constitute Adultery

Referring to provisions of Section 497 IPC, the judge says: “What is apparent on a cursory reading of these ingredients is that a married man, who has sexual intercourse with an unmarried woman or a widow, does not commit the offence of adultery. Also, if a man has sexual intercourse with a married woman with the consent or connivance of her husband, he does not commit the offence of adultery. The consent of the woman committing adultery is material only for showing that the offence is not another offence, namely, rape.”

He adds: “The sanctity of marriage can be utterly destroyed by a married man having sexual intercourse with an unmarried woman or a widow, as has been seen hereinabove. Also, if the husband consents or connives at such sexual intercourse, the offence is not committed, thereby showing that it is not sanctity of marriage which is sought to be protected and preserved, but a proprietary right of a husband. Secondly, no deterrent effect has been shown to exist, or ever to have existed, which may be a legitimate consideration for a State enacting criminal law. Also, manifest arbitrariness is writ large even in cases where the offender happens to be a married woman whose marriage has broken down, as a result of which she no longer cohabits with her husband, and may in fact, have obtained a decree for judicial separation against her husband, preparatory to a divorce being granted. If, during this period, she has sex with another man, the other man is immediately guilty of the offence.”

Section 497 Demeans Or Degrades The Status Of A Woman

Referring to observations made in privacy judgment, Justice Nariman also observes that the dignity of the individual, which is spoken of in the Preamble to the Constitution of India, is a facet of Article 21 of the Constitution.

“A statutory provision belonging to the hoary past which demeans or degrades the status of a woman obviously falls foul of modern constitutional doctrine and must be struck down on this ground also,” he says.

Woman being likened to chattel

Justice Nariman comments in the judgment: “Further, the real heart of this archaic law discloses itself when consent or connivance of the married woman’s husband is obtained – the married or unmarried man who has sexual intercourse with such a woman, does not then commit the offence of adultery. This can only be on the paternalistic notion of a woman being likened to chattel, for if one is to use the chattel or is licensed to use the chattel by the “licensor”, namely, the husband, no offence is committed. Consequently, the wife who has committed adultery is not the subject matter of the offence, and cannot, for the reason that she is regarded only as chattel, even be punished as an abettor. This is also for the chauvinistic reason that the third-party male has “seduced” her, she being his victim. What is clear, therefore, is that this archaic law has long outlived its purpose and does not square with today’s constitutional morality, in that the very object with which it was made has since become manifestly arbitrary, having lost its rationale long ago and having become in today‘s day and age, utterly irrational. On this basis alone, the law deserves to be struck down, for with the passage of time, Article 14 springs into action and interdicts such law as being manifestly arbitrary.”

Justice Nariman also finds fault with Section 198 CrPC, which states that it is the husband alone or somebody on his behalf who can file a complaint against another man for this offence.

Overruling the judgment in Sowmithri Vishnu v. Union of India that had upheld Section 497, Justice Nariman remarks: “This judgment also must be said to be swept away by the tidal wave of recent judgments expanding the scope of the fundamental rights contained in Articles 14, 15, and 21. Ancient notions of the man being the seducer and the woman being the victim permeate the judgment, which is no longer the case today. “

While holding Section 497 IPC and Section 198 CrPC unconstitutional, Justice Nariman remarks: “The moving times have not left the law behind as we have just seen, and so far as engaging the attention of law makers when reform of penal law is undertaken, we may only hasten to add that even when the 45 CrPC was fully replaced in 1973, Section 198 continued to be on the statute book. Even as of today, Section 497 IPC continues to be on the statute book. When these sections are wholly outdated and have outlived their purpose, not only does the maxim of Roman law, cessante ratione legis, cessat ipsa lex, apply to interdict such law, but when such law falls foul of constitutional guarantees, it is this Court‘s solemn duty not to wait for legislation but to strike down such law.”