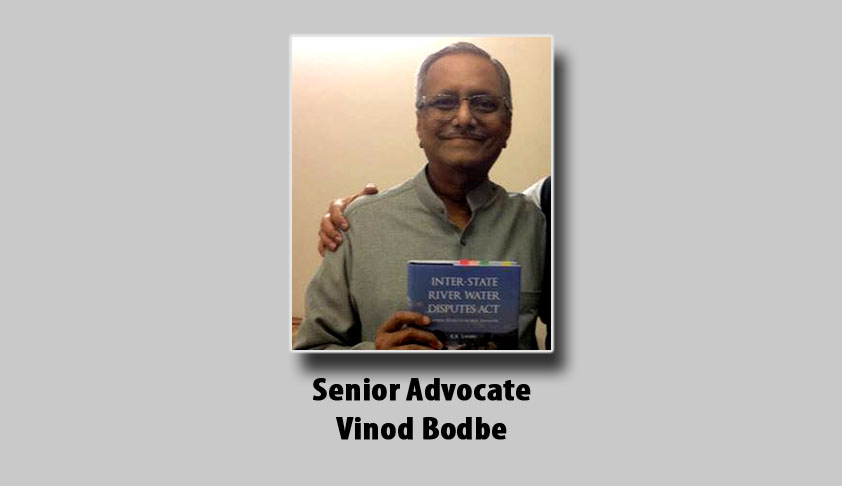 Senior Supreme Court Lawyer Vinod Arvind Bobde has passed away. He was a constitutional expert. He has also mastered the law on inter-state water disputes and regularly engaged by various State Governments. He had appeared in many sensational cases like Mullapperiyar and Cauvery Water Dispute etc. His father was a Senior Lawyer and former Advocate General of Maharashtra. He is the elder brother of sitting Supreme Court Judge, Justice SA Bobde.

In an Article published by District Bar Association, Nagpur in the year 2011 it is written as follows;

“We have the proud privilege of the generation of eminent lawyer Mr. M.R. alias Bhayyasaheb Bobde, leader of the bar of the Central province and Berar for more than 35 years. His statue at the AIR square in front of the District Court will continue to inspire generations of lawyers to come. His younger brother Advocate S.R. Bobde was also an eminent and fearless lawyer, but expired too young. Son of Advocate S.R. Bobde Advocate A.S. alias Bhau Sahib Bobde was one of the top most lawyers of Nagpur Bar and was also the Advocate General of Maharashtra. His two sons are also eminent luminaries in the legal fraternity. The elder son Vinod Bobde is an eminent lawyer and Senior Advocate in the Supreme Court of India and younger son Justice S.A. Bobde is a sitting judge of Bombay High Court.”

“A dear friend and my professional hero, Vinod Bobde is no more. RIP,Dada. In these raucous times in court, your gentlemanly advocacy and your soft persuasion will be missed. Will God make counsel like you again?”