Sex work with dignity: Two sides to the debate 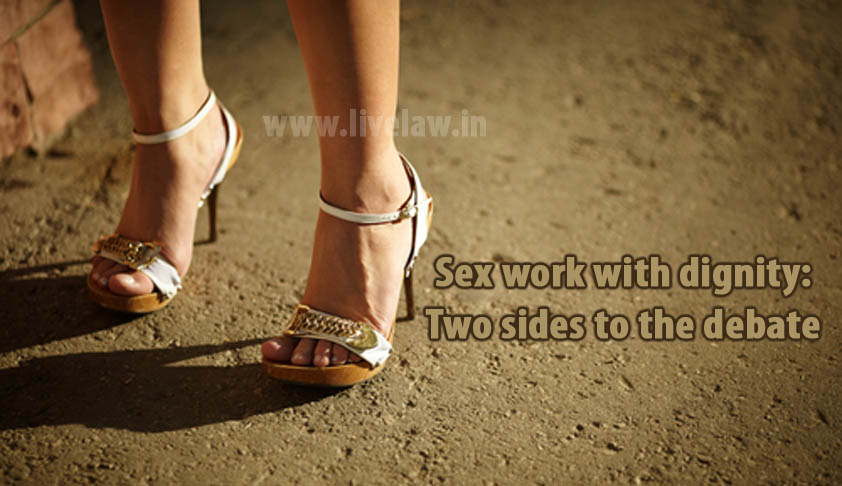 The debate today revolves around legalization of sex work. But how did India get to this debate? Consider the following a refresher- What is the current situation and how we got here:The Law:The primary law dealing with the status of sex workers was the Immoral Traffic (Suppression) Act (SITA) 1956. This was amended and the current law is the Immoral Traffic (Prevention) Act (ITPA)...

The debate today revolves around legalization of sex work. But how did India get to this debate? Consider the following a refresher- What is the current situation and how we got here:

The ITPA regulating sex work can at best be described as ambiguous. On the one hand sex work has neither been given the status of a crime nor has it been left free from criminal prosecution. The lawmakers viewed the women engaged in sex work as victims and hence did not want to penalize them. Instead, they decided to punish those who profited from or exploited these women. So, even though sex work was not, per se, defined as a crime; several conditions surrounding it were defined as crimes- such as soliciting, running a brothel, pimping etc.

Further, this Act tries to tackle sex work and trafficking under the ambit of the same law and hence makes no distinction between consensual and non-consensual sex work. Another bitter reality is that ITPA made for the protection of these women and to prevent criminal prosecution against them, isinfact being used to sponsor such prosecutions under the guise of charges of soliciting. Studies have shown that despite the noble intentions of Indian lawmakers, the implementers of the very same law — the police — have used every means possible to harass sex workers on charges of soliciting and enrich themselves by taking petty bribes in lieu of dropping criminal charges. Even today, sex workers all over India are routinely arrested even when not soliciting. Also AIDS activists and peer educators are harassed by police while distributing condoms and educating sex workers about HIV prevention.

In short the current legal framework is not working. In 2005 in an attempt to revamp the law, the then Department of Women and Child Development (WCD) proposed changes to the ITPA Though this Amendment Bill 2006 has lapsed, there are some interesting points that can be garnered from the experience therein.

On March 8, 2006, even before the amendments had been introduced in Parliament, more than 4,000 sex workers marched the streets of Delhi to draw political and public attention to the fact that the amendments would deny them their already meager livelihoods.

The National Network of Sex Workers sent a letter of protest to the department of women and child development describing the provision as a direct attack on their livelihood.

TriptiTandon of Lawyers Collective HIV/AIDS Unit said, "This prohibitionist model has failed to protect sex workers who are driven underground by clients wanting to avoid the police."

Addressing a press conference, the National Network of Sex Workers and Durbar MahilaSamanvay Committee (a collective of over 65,000 sex workers from West Bengal and Andhra Pradesh) said the law should instead replace clients with pimps for punishment. They demanded life imprisonment for pimps.

Lessons learnt from these amendments/experiences:

Made little or no sense to sex workers or to those who recognized adult sex work as consensual rather than criminal.

Amendments opposed for health reasons. The Health Ministry recommended that the amendment to criminalize clients and sex work be dropped. The health ministry and National AIDS Control Organization (Naco) officials argued that if clients were punished, it would encourage underground sex work and that would act as a major stumbling block in checking AIDS.

Amendments would violate Human Rights and hence were opposed.

Amendment would be inconsistent with International Standards

Research shows that the intention of combating trafficking through the abolition of sex work is ineffective. The case of Sweden and a study by independent researcher Petra Ostergren who interviewed sex workers about the effect of the law on their life clearly illustrates this fact. She found that rather than decreasing sex work, the law has merely increased the vulnerability of sex workers:

In order to negate the prohibitionist model, the researcher reviewed three Swedish government reports from the National Council for Crime Prevention, the National Board of Health and Welfare and The National Police Board. Findings included:

Thus, this brings us to the second part of the debate. Is it better to legalise sex work?

In the case of Budhadev Karmaskar v. State of West Bengal, Criminal Appeal No. 135 of 2010, The Supreme Court of India upheld the conviction of the accused for murdering a sex worker in Calcutta in 1999. The Supreme Court went further and suo moto (of its own accord)converted the appeal into a Public Interest Litigation on the rehabilitation of sex workers.

“the prostitutes also have a right to live with dignity under Article 21 of the Constitution of India since they are also human beings and their problems also need to be addressed”.

“a woman is compelled to indulge in prostitution not for pleasure but because of abject poverty. If such a woman is granted opportunity to avail some technical or vocational training, she would be able to earn her livelihood by such vocational training and skill instead of by selling her body.”

Mr. Pradip Ghosh, Amicus Curiae in the case and Senior Counsel who is the Chairman of the Panel

These aspects may be studied by the Panel and they may make suitable suggestions to the Court.”

These were definitely welcome steps forward. The opinions of sex workers, the most important stakeholders, were being taken on board. The issue of trafficking was separated from sex work. It is true that there are areas of overlap but they cannot be viewed as one and the same. Although those who advocate the abolition of sex work have always insisted that trafficking and sex work are one and the same, the experiences of sex workers show that they are not. Consequently as a result of this separation, the issues regarding those who voluntarily continue to engage in sex work were to be considered. The Supreme Court recognized the fact that those engaged voluntarily in this work should be allowed to do so with dignity.

However the Supreme Court has never encouraged legalization of sex work. Infact it even clarified this by its order dated 26 July 2012, limiting its work to creating “Conditions conducive for sex workers to live with dignity in accordance with the provisions of Article 21 of the Constitution” and former Justice Gyan Sudha Misra wrote

We, therefore, wish to be understood that we confine ourselves to the efforts for rehabilitation of sex workers which should not be construed as facilitating, providing them assistance or creating conducive conditions to carry on flesh trade for expanding their business in any manner as it cannot be denied that the profession of sex trade is a slur on the dignity of women.

With this background, the comment of National Commission for Women (NCW) Chairperson Lalita Kumarmanglam on Legalization of sex trade has certainly raised eyebrows. On 8.11.2014 a meeting, included representatives from the National Commission for Women (NCW), the National Aids Control Organisation, the Ministry of Women and Child Development, sex workers collectives and non-governmental organisations, to discuss this issue further. The recommendations put forth herein will now be presented before the Supreme Court.

“We whole heartedly support the view of the new Chairperson of NCW, Govt. of India, for her unbiased approach and positive attitude towards women in general and sex work in particular. Nonetheless this is a bold step towards ‘recognizing agencies’ of the women with a view to create a support base for the sex workers and their family members. We consider that Labour Legislation designed for sex workers would help
1. Decriminalize sex work.
2. Will distinguish between sex work and trafficking.
3. Would protect sex workers from getting exploited and physically abused by police, goons and their supporters.
4. Would be effective in combating trafficking in sex work.
5. Would create a step forward to provide respect and dignity to sex workers’ community.

There are more than 4 million sex workers in our country, who maintained their livelihood through selling sex services what in turn helps betterment of sex workers’ family including improvement of quality of life of sex workers and their children.

Existing Act (ITPA) which indirectly criminalizes sex work and sex workers essentially absorbs rights of women and her ability to exert her agencies as a full-fledged citizen of her country. Recognizing sex work as a form of work and protecting their labour rights through appropriate labour legislation would empower women in sex work and her rights to self determination. We urge NCW to engage representatives of sex workers in drawing the framework of labour legislation in sex work, keeping in view the existing labour laws for unorganized labour sectors in our country.”

“The safeguard of rights of people and the work that they do should be the prime concern. Sex work is taken up to support their family and for their livelihood and decriminalization will promote their safeguard and will render justice to them. I hence support decriminalization of sex work.

There are other ways of controlling immoral trafficking, and targeting a section of people who are making a livelihood out of this work would be wrong.”

IndrayaniPatani, President of All India Federation of Women Lawyers opposing the legalisation said in a comment to one of our correspondents:

“Legalization of sex work should not be permitted because as per the Constitution, even though any person is free to carry out any form of business, if someone is compelled to do sex work, then that is a crime. Immoral trafficking is going on and in case where sex work in legalized, controlling immoral trafficking will become a major issue.

Legalization and licensing will increase the exploitation and immoral trafficking of women.

The Immoral Traffic (Prevention) Act, 1956 should be made very strict in fact, rather than easing it up. The police machinery does not act in consonance with it. There should be a proper investigation agency. On the complaint of any NGO, power for raiding brothels and other related places should be strengthened.

Most of the times, there is force involved in such situations, where women do not willingly get involved in sex work. It is hence necessary to ascertain these things. These women are not financially independent too.

Owner, landlord or licensee who is using his property for sex work should be found out and their property should be immediately seized by the Government. And if such private properties are prevented from being used as brothels, it will ease up the situation a little. Hence, drastic steps need to be taken in this regard.”

The question remains what is sought to be achieved by this legalization. Can sex be legalized in the existing legal framework of India? Is India ready for legalization of sex work and will it be more beneficial and easier to regulate sex work? Will it be in sync with international obligations and human rights standards? Do the most important stakeholders want legalization?

The prohibitionist model does not seem to work and legalization of sex work will come with a new set of issues to tackle. Reference to various models used in other countries should be made.A successful model is from New Zealand which uses the reformatory approach. Perhaps the Supreme Court of India has rightly started down the part of reformatory approach. It is neither an easy answer nor is there a simple solution.