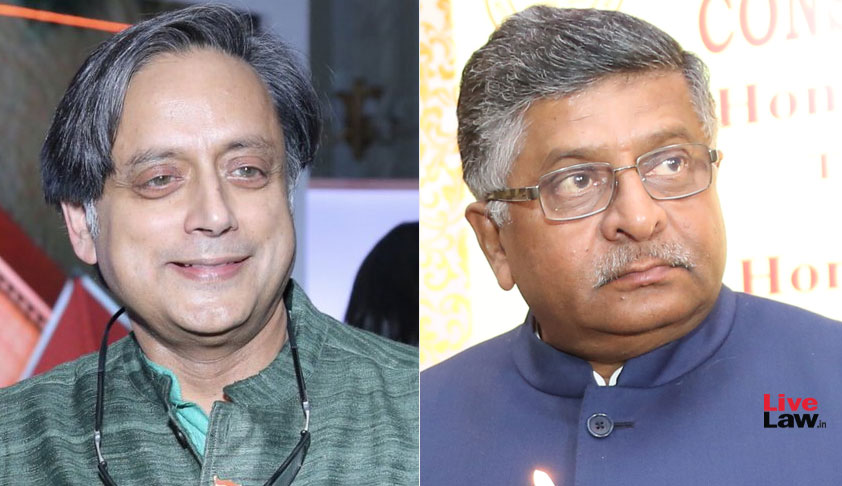 Congress leader Dr. Shashi Tharoor has filed a criminal defamation case against Union Minister Ravi Shankar Prasad, after the latter called him an “accused in a murder case” during a press conference. The case was filed on December 7 in the Court of Chief Judicial Magistrate of Thiruvananthapuram.Mr. Prasad had made the remarks after Mr. Tharoor referred to an article quoting an unnamed...

Congress leader Dr. Shashi Tharoor has filed a criminal defamation case against Union Minister Ravi Shankar Prasad, after the latter called him an “accused in a murder case” during a press conference. The case was filed on December 7 in the Court of Chief Judicial Magistrate of Thiruvananthapuram.

Mr. Prasad had made the remarks after Mr. Tharoor referred to an article quoting an unnamed RSS source as saying that Prime Minister Narendra Modi was like a “scorpion sitting on a Shivling who cannot be removed by hand or hit with a chappal (slipper)”.

The murder case being referred to is that concerning Mr. Tharoor’s wife, Ms. Sunanda Pushkar, who was found dead in a suite in Leela Hotel in South Delhi on January, 17, 2014.

The Delhi Police had filed a charge-sheet in May this year, naming Mr. Tharoor as an accused. It had cited an email sent by Ms. Pushkar to her husband, expressing her wish to die. The police has filed a final report before the Additional Metropolitan Magistrate, Patiala House Courts and the trial is going on.

The complaint filed by Mr. Tharoor now draws the court’s attention to a 2 minute 16 seconds video clip of a press conference, posted by Mr. Prasad on Twitter on October 28, wherein the BJP leader is seen as saying,

“Tharoor is chargesheeted in a serious allegation of murder. I don't want to give him more respect and prestige by responding to his baseless allegations.”

Calling this a “culpable and malicious” attempt at defaming him, the complaint explains, “A perusal of the Impugned post/tweet with the video clip and the statements, makes it abundantly clear that, the accused has purposefully lied to the public with the culpable and malicious intention to defame the complainant and thereby to spread an untrue, false and scandalous imputation against the complainant that he is an accused in a case of “murder” and that he has been charge-sheeted for the offence of “murder”. Both as a member of the general public who is aware of the current affairs of the country and also as a person who holds the very esteemed post of the Union Law Minister for India, the accused must be well aware that the complainant is not charge-sheeted by Police and he is not an accused in a case of murder.”

As for his Shivling remark, Mr. Tharoor claims that his speech was distorted and picked out of context in order to tarnish his image. He further points out that the case against him is not of murder punishable under section 302 of IPC but that of offences under sections 306 (abetment of suicide) and 498A (husband subjecting woman to cruelty) of IPC.

The accused, being an eminent lawyer and a designated Senior Advocate with the Supreme Court of India knew very well that whatever he has stated are incorrect and defamatory to the complainant.  However those allegations were made maliciously and with ulterior motive to lower the credit and esteem of the complainant among the General Public.”

Asserting that Mr. Tharoor has been in a “complete state of emotional trauma” since the telecast of the clip, the complaint finally avers,

“As a result of the publishing of statements and video in twitter on 28/10/2018, by the accused person, the image and good reputation which the complainant has scrupulously built up throughout his life, has been tarnished and thereby the acts of the accused have caused serious prejudice and irreparable injury to the complainant.”