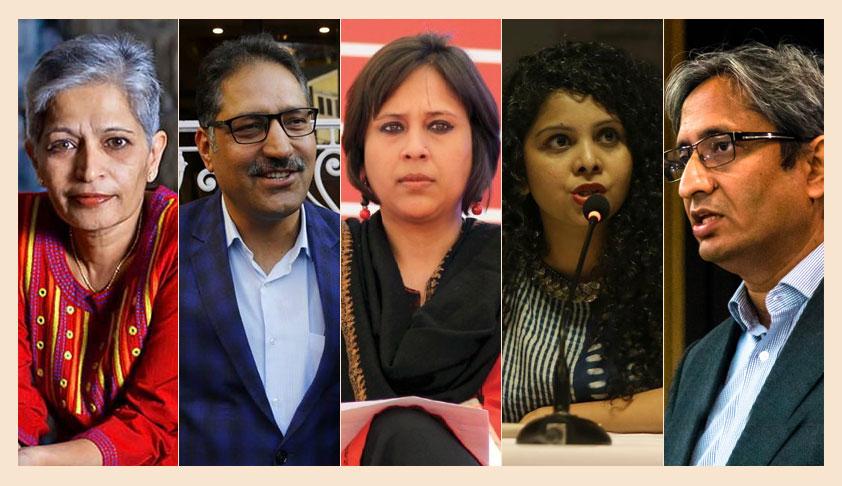 What can the Constitutional Courts do when fundamental freedoms are curtailed by non-state actors like troll armies and fringe elements?As people all over the country were keenly awaiting the sighting of the crescent moon on June 15- believers for declaration of Eid-ul-Fitr and non-believers in anticipation of an extended weekend- the editor of Rising Kashmir, Shujaat Bukhari got killed...

What can the Constitutional Courts do when fundamental freedoms are curtailed by non-state actors like troll armies and fringe elements?

As people all over the country were keenly awaiting the sighting of the crescent moon on June 15- believers for declaration of Eid-ul-Fitr and non-believers in anticipation of an extended weekend- the editor of Rising Kashmir, Shujaat Bukhari got killed by militants in front of his office at Srinagar. As many as 16 bullets were pumped into his body from close range by the militants, who were agitated by his attempts to negotiate peace in Kashmir.

Earlier that week, the Special Investigation Team of Karnataka Police got a break through in the case of murder of journalist Gauri Lankesh, who was shot dead in front of her house at Bangalore on September 5, 2017. The SIT announced to the media that it had arrested one Parashuram Waghmare, who had allegedly fired the gun at Lankesh. According to the SIT, he confessed that the killing was made to ‘save his religion’.

On June 7, journalist Barkha Dutt revealed in Twitter that she had received chilling veiled threats and “messages” from powerful people in the Establishment that she and her family were under surveillance.

For this tweet, she was abused and trolled, and some of them commented that she could go to Pakistan if India was unsafe for her.

During April, journalist Rana Ayyub, who also authored the book Gujarat Files about the complicity of State Government in Gujarat riots and encounter killings, became the victim of cyber abuse, which was vituperative and organized. A fake tweet attributed to her, in which she was depicted as justifying the rapists involved in Kathua incident, was widely circulated in social media, triggering off a co-ordinated cyber attack on her. It was an online lynch mob on prowl, which continuously posted hateful, abusive and threatening comments on her profile page. Not stopping at that, a morphed obscene video of hers was widely shared. “I couldn’t sleep for three nights. I couldn’t talk, I couldn’t believe what was happening.”, she said. The situation was so grave that it got global attention, prompting the Office of High Commissioner of United Nations Human Rights to issue a statement, as follows :- We call on India to urgently take steps to protect Rana Ayyub and to ensure the threats against her are promptly and thoroughly investigated. The Government has an obligation to provide effective protection to those who receive death threats and to protect individuals from foreseeable threats to life or bodily integrity,”

In late May, Ravish Kumar, Executive Editor of NDTV, described the gruesome level of online threats and abuses directed at him, the graphic details of which are blood-churning.

During March 2108, three journalists -Sandeep Sharma of Madhya Pradesh, Navin Nischal and Vijay Singh of Bihar- were killed in what appeared to be stage-managed hit and run incidents.

These are highly disturbing developments, which do not befit a robust democracy built on Constitutional values. In this backdrop, it will not be an exaggeration to state that journalism is one of the riskiest jobs with most occupational hazards in India. It is not surprising that India slipped to 138th rank in the World Press Freedom Index this year. The notable feature of this trend is that the threat is not manifestly emanating from the State as such; but from fanatics, bigots and cyber mercenaries, who organize themselves into a well-oiled machinery to launch attacks, seemingly with patronage of powers that be. What protection does our Constitution offer to press freedom against attacks by such non-state actors?

Fringe has become the new mainstream these days. The fringe elements, which used to regularly indulge in hate-speeches, slut-shaming, death threats, rabid abuses, etc have gained considerable power and influence over the socio-cultural space over the past few years. They have attained more visibility, and consequentially more acceptance amongst the general public.They seem to be ventilating the ugly prejudices and bigoted aspirations, which the mainstream middle-class have kept suppressed in their psyche to maintain the veneer of respectability.

The accused in Gauri Lankesh murder are reported to have links with Sri Ram Sene Chief Pramod Muthalik. Though Muthalik denied links with the accused, he himself showed no hesitance in displaying his contempt towards Gauri Lankesh in bilious innuendos, which cannot be reproduced in this piece. Most of the twitter accounts which celebrated the death of Gowri Lankesh using unparliamentary language were proudly flaunting the fact that they were followed by none other than the Prime Minister of India. The celebration of the death of Gauri Lankesh had grown to sickening proportions that Union Law Minister Ravi Shankar Prasad was forced to post a tweet condemning the celebration of happiness over her dastardly death. As per a report in “The Wire” even Ravi Shankar Prasad was not spared by bigoted trolls for his statement. Bowed down to media, secular and liberal bullies? We work for you tirelessly, selflessly. This is the reward,” tweeted one user, whose profile stated that she was “blessed to be followed by Modi”, as a response to Ravi Shankar Prasad’s condemnation.

Trinamool M.P Dereck Obrien had listed out the names of the twitter accounts followed by the Prime Minister, who were notorious for being abusive and vitriolic against those expressing views against the government. He had said "there are 26 Twitter handles which give all kinds of threats, including rape, to people for posting anything against the government. Two of these handles have been suspended by Twitter. They were invited to the Prime Minister's social media party". Later, those names listed out by Obrien were expunged from the records of Rajya Sabha on objection taken by Union Minister Smriti Irani that individuals who were not present in the House should not be condemned unheard.

There seems to be an invisible umbilical cord which links the ruling parties and the troll armies, and they often act in tandem.Whenever journalists raise uncomfortable questions against the establishment, or criticise the tenets of the cultural ideology espoused by the ruling dispensation, it is the troll army which gets rattled, and they spring into action. The trends and causal connections are so obvious that one might even doubt whether they are informal agents of governments who are deputed to do “dirty work” at its behest. Because, the troll-army is not shy of displaying the patronage they enjoy from those in power, and they are ‘performing’ their functions with absolute impunity and brazenness. The book “I am troll : Inside the Secret World of the BJP’s Digital Army” by Swati Chaturvedi reveals how trolls are part of highly organized IT cells of political parties, effectively used by politicians to further their agendas. What can the Constitutional Courts do when fundamental freedoms are curtailed by non-state actors like troll armies and fringe elements?

It is well-settled that ‘press freedom’ is part of freedom of speech and expression protected by Article 19(1)(a) of the Constitution of India. The grounds on which State can restrict press freedom through law on reasonable grounds are clearly spelt out in Article 19(2). The Indian judiciary has been generally pro-active in upholding press freedom against legislative excesses by the State. But, how can these traditional safeguards ensure protection against extra-constitutional agencies like troll armies and fundamentalist outfits? The judiciary has developed the concept of ‘horizontal application’ for protection of fundamental rights against infringements by non-state actors. But again, how can that be effective against unidentifiable, faceless trolls, who rummage through social media profiles like hydra-headed monsters? It is often pointless to look up to the government and traditional legal machinery, because the interests of the governments in power and these supra-legal entities often merge. Also, since these elements wield substantial influence in the mainstream, the ruling parties are wary of rubbing them the wrong way, and hence cow down to their ‘hecklers veto’.

Our jurists and legal philosophers should ponder over this issue to evolve constitutional tools to safeguard freedoms from the onslaught of extra-constitutional entities. The Courts have developed the concept of ‘John Doe order’ , ‘super-injunction’ etc to afford universal protection for intellectual property rights against potential threat of infringement by anonymous persons who are large in numbers. Extrapolation of this concept to afford constitutional protection to press freedom should be considered to address the new-age problems caused by non-state actors. Because, to let these supra-legal elements have their way means the subversion of the Constitution itself.

Perhaps, the problem is too deep-rooted to be solved by law alone. As stated above, the trolls and fringe elements reflect the hidden thoughts of the mainstream majority. Therefore, in a democracy powered by majoritarian sentiments, the fringes will enjoy defacto legitimacy. The principal architect of Indian Constitution Dr.B.R Ambedkar had a dystopic vision of Indian democracy, when he said, “Democracy in India is only a top-dressing on an Indian soil, which is essentially undemocratic”. Sadly, these words hold true even today. Unless the Indian mindset is fundamentally changed to become more liberal, broad-minded and accommodative of diversity, the role of Courts and Law will be confined to only offering ad-hoc quick fix solutions, and the fundamental freedoms will remain inalienable only in the print of the Constitution.

[The opinions expressed in this article are the personal opinions of the author. The facts and opinions appearing in the article do not reflect the views of LiveLaw and LiveLaw does not assume any responsibility or liability for the same]
TagsBarkha Dutt Constitution of India Extra-Constitutional Threat Gauri Lankesh Kathua incident Pramod Muthalik Press Freedom Rana Ayyub Ravish Kumar Shujaat Bukhari
Next Story
Similar Posts
+ View more
Law Firms
+ More