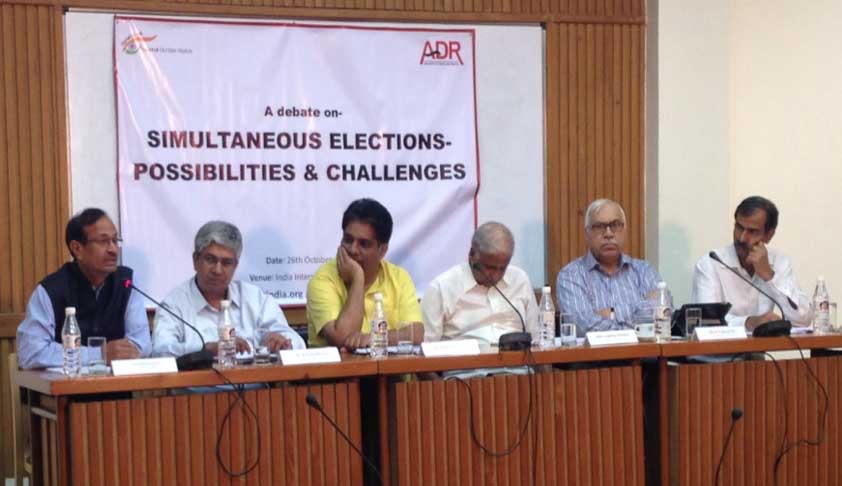 At a panel discussion on the proposal to hold simultaneous elections to Lok Sabha and State Assemblies, speakers have expressed serious concern about its consequences for India’s federalism.The discussion, organised on October 26, at the India International Centre, New Delhi, saw several speakers questioning the proposal 0f holding simultaneous elections to the Lok Sabha and state...

At a panel discussion on the proposal to hold simultaneous elections to Lok Sabha and State Assemblies, speakers have expressed serious concern about its consequences for India’s federalism.

The discussion, organised on October 26, at the India International Centre, New Delhi, saw several speakers questioning the proposal 0f holding simultaneous elections to the Lok Sabha and state assemblies, without taking into account the consequences for Indian democracy.

The event was organised by Association for Democratic Reforms (ADR) and chaired by the organisation’s Founder – Trustee, Professor Jagdeep Chhokar.

The former Chief Election Commissioner, S.Y.Quraishi, while appreciating the idea of simultaneous election,  remarked there is no clarity on how it will be implemented. He said, “…elections have become the root cause of corruption in the country.” He explained that political donations require quid-pro-quo; hence after winning elections, the politician-bureaucrat nexus indulges in “recovering the investment” and that is where corruption begins. He also emphasised that “caste, religion and communal issues are perpetuated by constant elections.”

Quraishi observed that the limit on expenses of candidates during the election campaign is not enough, as the Representation of Peoples Act, 1951, is silent on the limit on expenditure, that could be incurred by political parties, on behalf of the candidates.

Quraishi also supported state funding instead of private funding for the political parties. He also suggested that the elections should be held within a shorter span of time. He said that the proposal of simultaneous elections needs to be “thought through” in detail as there are many logistics issues involved like additional requirement of Electronic Voting Machines and security forces.

Professor Sanjay Kumar, Director of the Centre for the Study of Developing Societies, and an eminent psephologist,  felt that the democracy had an intrinsic value, and added, “…efforts should be made to hold simultaneous elections in those state assemblies which are completing their tenure together rather than forcing simultaneous elections by law.”

He stated that a, study by CSDS of 31 Assembly elections that were held along with Lok Sabha elections from 1989 to 2014 show that in 24 instances/elections the major political parties polled almost a similar proportion of votes both for the Assembly and the Lok Sabha, while only in seven instances was the choice of voters somewhat different.

If elections are held separately, then regional parties have a better scope of winning, he said and added:  “Simultaneous elections will curb the voice of people living at the margins of the society by strangulating the scope for regional parties which reflect local aspirations/issues. This will reverse the process of deepening democracy”, he cautioned.

While talking about the various legal roadblocks faced in ushering in simultaneous elections, M.R. Madhavan, President of PRS Legislative Research, explained that when the public is deeply swayed towards a party, there might be more chances of the party winning not only during the general elections but also any assembly elections held around the same time which could drastically affect the role of the regional parties representing the marginalised communities of the country.

Quraishi disagreed with politicians’ stand that frequent elections are a hindrance to the implementation of government schemes.

Sanjay Kumar apprehended that simultaneous elections might lead to the decline in the political status of regional parties. “It will cause reverse democratisation”, he predicted.

Chhokar warned that ‘one nation- one election’ is a surreptitious attempt to destroy the federal character of India.  He argued that it was against the federal character of the Constitution. Secondly, while disagreeing with Yadav, he stated, “that means and ends are interlinked.” He expressed his disagreement with Sanjay Kumar over the need for revision in the model code of conduct. He stated that revision of the model code of conduct would destroy it. He stated that the proposal for simultaneous elections was politically motivated.

The deadline for submission of views on the issue through mygov portal, initiated by the Central Government, was over on October 15.