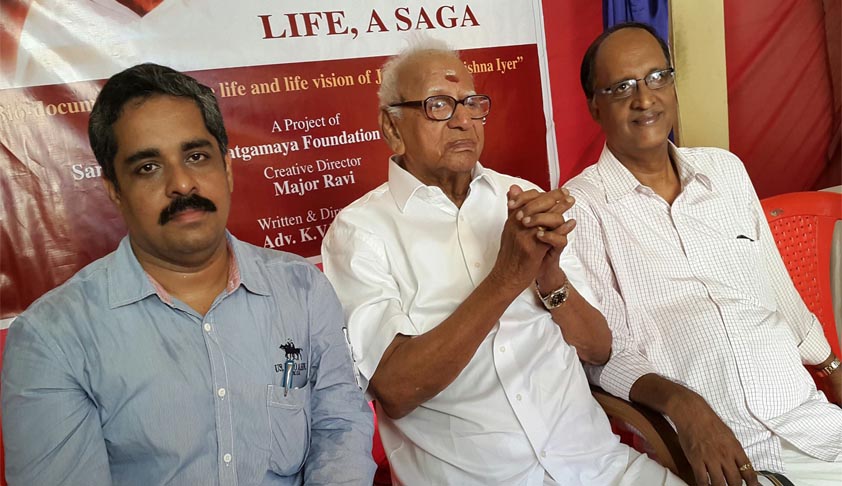 Legal fraternity celebrates the centenary of a humane judge of this century, Rtd. Justice V R Krishna Iyer. Justice Krishna Iyer, is well known in the legal field, for his remarkable contribution to the Indian Judiciary, particularly, for his role in the Supreme Court, during the tenure from 1973 to 1980, during which he officiated the seat of a Judge of the highest court in India. He has...

Legal fraternity celebrates the centenary of a humane judge of this century, Rtd. Justice V R Krishna Iyer. Justice Krishna Iyer, is well known in the legal field, for his remarkable contribution to the Indian Judiciary, particularly, for his role in the Supreme Court, during the tenure from 1973 to 1980, during which he officiated the seat of a Judge of the highest court in India. He has more than 700 judgements in his credit and many of them are classics in Indian jurisprudence, due to its literary specialism as well as precedential value.

Born to V.V. Rama Ayyer and Narayani Ammal, as their second child, Krishna Iyer started his legal profession under the guidance of his able father, who was a renowned lawyer in the erstwhile Malabar District of Madars State. Krishna Iyer is a multifaceted personality with rich experiences as Legislature, Minister, Judge and now as a social activist in the post retirement years.

His contributions to the evolution of Indian judicial system and legal jurisprudence are noteworthy. In one of the most celebrated judgements, in Sunil Batra, Justice Krishna Iyer has declared his unique vision on prison justice and conceptualized thoughts on freedom behind bar and necessity for peace in prisons. His declaration of thoughts in Ediga Annamma on capital sentence that life imprisonment for murder is the rule and capital sentence is the exception and a better world is one without legal knifing of life, prompted the community at large, around the world, to fight against the present style of sentencing policy, which justifies death sentence in rarest of rare cases. In Nandini Satpathy, Justice Krishna Iyer observed the policy of law is that each individual, including an accused, by virtue of his guaranteed dignity, has certain rights. He objected investigatory invasion on their free life and held that a compelled testimony is against the constitutional principles in Article 20(3) of the Constitution of India. Maru Ram, is one of the finest example to describe his wide knowledge in criminal justice jurisprudence.

He has his own style and role in pronouncing the principles of law in all aspects of law, service, taxation etc. It is apparent to note that in Aravinda Reddy, he exposed the illegitimate actions of tax payers to evade tax on the pretext of tax avoidance, which according to him is against the interest of welfare state. In Muthamma, Justice Krishna Iyer, discussed on the violation of equality principles in the light of alleged sex discrimination and gender bias in service jurisprudence. In N M Thomas, he discussed on the aspect of the necessity for ensuring social justice in the service jurisprudence.

In M V Dhabolkar, Justice Krishna Iyer reminded the legal professionals on their responsibilities to the society and observed that it is a public institution committed to public justice and pro bono public service.

His reasoning and findings in Maneka Gandhi discloses, the liberal approach of Justice Krishna Iyer to protect individual freedom from state aided abuses and his strong views against executive lawlessness. Shamsher Singh is yet another contribution of Justice Krishna Iyer to settle the conflicts in the executive hierarchy while defining the parameters of their powers.

Bangalore Water Supply, is yet another celebrated decision of Justice Krishna Iyer, in which he declared his sentiments towards the working class, by expanding the meaning of industry for the purpose of granting justice to thousands of workers, who are not covered by the provisions of Industrial Disputes Act. In Hussain Bai, he declared, life, in conditions of poverty aplently is not livelihood, and livelihood is work with wages. He said, working class sector needs succour for livelihood through labour.

According to Iyer poverty and concomitant injustices arise from unjust society and unjust institutions. There are classes of people, who are economically poor, socially disadvantaged and politically ineffective and powerless. So he canvassed for their right to access justice, through state aided legal aid and recommended for constituting legal services programme for the betterment of such classes. In Haskot, he emphasised the great need of legal aid for under trial prisoners and other prisoners in jail and in Rangadurai, he introduced a reformative punishment policy in cases of professional misconduct by mandating erred lawyer to serve the poor, by participating in legal aid schemes. Class actions and representative proceedings has obtained wider and effective meaning, when Justice Krishna Iyer decided Akhil Bharathiya Soshit Karmachari Sangh. He reminded us on the effective role of participative justice to curb expensive plurality of litigations.

In Somnath and Narotham Singh, Justice Krishna Iyer declared that gender justice has a high place in Indian Criminal jurisprudence and cautioned the law makers to have a pragmatic move with more perceptive and sociologically relevant approach to punishment. In Bai Tahira, he took a soft approach on neglected wife and discarded divorcees and held that Section 125 of Cr.P.C must receive a compassionate expansion of sense. In Fazlumbi, Justice Krishna Iyer held judge should have empathy for the weaker sex and held that such provisions denotes the secular code designed to protect destitute women, irrespective of religion, but for a whole community of womanhood.

No one can ignore the role of Justice Krishna Iyer and his judicial wisdom in keeping a political equilibrium in the Country, by intervening in the disqualification order of Indira Gandhi, while issuing a conditional stay order in Indira Gandhi’s election case. This was a largely criticised judicial pronouncement of Justice Krishna Iyer, which became a part of our political history.

There are many, hundreds and hundreds of judgments, articles and public comments, delivered by justice Krishna Iyer, touching various aspects, issues, subjects, classes, communities, jurisprudential thoughts etc. The contribution of Justice Krishna Iyer to the legal system in India is outstanding and innumerable.  We missed him in the superior post of President of this Country, due to divergence in the party system of our democracy. But we are fortunate to have such a great and gifted personality in the highest judiciary of this Country.

Dr. K.P.Pradeep is a practicing lawyer at Kerala High Court. He worked with Justice Iyer in the National Commission to review the working of the Constitution