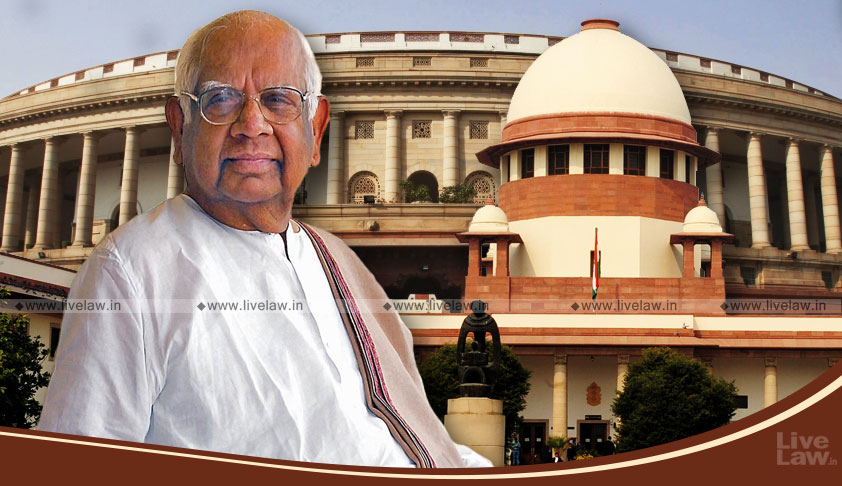 "Rule of law has to be enforced not by expanding any organ's extent of powers, by encroaching into areas specifically assigned to any other, but by diligently and effectively discharging each one's assigned responsibilities."- Somnath Chatterjee, commenting on judicial interference in legislative domain.Somnath Chatterjee must have despised an unidimensional life. Perhaps, that's the reason...

"Rule of law has to be enforced not by expanding any organ's extent of powers, by encroaching into areas specifically assigned to any other, but by diligently and effectively discharging each one's assigned responsibilities."- Somnath Chatterjee, commenting on judicial interference in legislative domain.

Somnath Chatterjee must have despised an unidimensional life. Perhaps, that's the reason why he chose to wear multiple hats to perform all ranges of roles which legal education enables one to do - lawyer, legislator, politician, author, jurist and parliamentarian.

He was also someone who defied predictable patterns in life. Though his father Nirmal Chandra Chatterjee- a prominent lawyer who went on to become a judge of Calcutta High Court - was one of the founding members of Hindu Mahasabha, Somnath Chatterjee drifted towards its ideological rival, the Left, and became a member of the Communist Party.  Later, he defied the diktat of his own Party, when his role as a Speaker and as a party member came in conflict, inviting expulsion from the party.

He had an illustrious career at law, and was designated as a Senior Advocate. But his deference for judiciary did not restrain him from openly calling foul, when he felt that Supreme Court was crossing the line by reviewing the decisions of Speaker and issuing directions for conduct of legislative proceedings. He launched a fiery battle to defend the Parliamentary privileges guaranteed by the Constitution, for he sternly believed that the Constitution was supreme, and  that all organs of the State have to perform only within their demarcated territories, strictly following the constitutional scheme.

Somnath Chatterjee was unanimously elected as the Speaker of Lok Sabha in 2004, when the coalition government under UPA came to power. His scholarship in Constitutional law and his outstanding track record as a Parliamentarian earned him the post.  As Speaker, he was very particular about preserving Parliamentary supremacy in the domain reserved to it by the Constitution, and loathed any sort of interference, even from the judiciary.

When the Supreme Court ordered the advancement of floor test of Jharkhand Legilsative Assembly in 2005 as per decision in Anil Kumar Jha v Union of India AIR 2005 SC 4255 (in a situation somewhat similar to the recent Karnataka Assembly case), Chatterjee was disappointed. He openly criticised the Supreme Court judgment, overlooking political considerations.

"It was a wrong decision. With due respect for the judiciary, which I fully respect, I say the Supreme Court should not have given this decision.  It was not judiciary’s work.  Whatever happened in Jharkhand assembly on the day decided by Supreme Court for vote of confidence was there for all to see. What would have the Court done after that? Could it have jailed the pro-tem speaker and the MLAs? Could it have sent police inside the assembly?", he said about the decision.

He even sought a presidential reference on the issue whether SC could order the conduct of proceedings of assembly in a particular manner. However, the ruling executive did not pursue the matter further, having regard to political ramifications. But, Chatterjee was unrelenting, and he convened a meeting of Speakers of all Assemblies, to discuss the issue. "I am the speaker of the Lok Sabha, the House of people’s representatives of the world’s largest democracy, I cannot silently see any interference in the functioning of legislature, if I remain silent, then I would be failing in my duty"- this was his firm conviction.

Late in 2005, another crises emerged, when  a sting operation caught several MPs demanding bribe for asking questions in Lok Sabha. Somnath Chatterjee, as the Speaker, issued order expelling 10 Lok Sabha MPs caught in the "cash for query scam". The expelled MPs approached the Supreme Court.  The Supreme Court issued notice to the Speaker on their petition. This was strongly objected to by Chatterjee. He stated that the decision of the Speaker cannot be questioned by the Court, and that the Court had no authority to issue notice to the Speaker. He relied on Article 122 of the Constitution of India, which stated "1) The validity of any proceedings in Parliament shall not be called in question on the ground of any alleged irregularity of procedure," and that "(2) No officer or member of Parliament in whom powers are vested by or under this Constitution for regulating procedure or the conduct of business, or for maintaining order, in Parliament shall be subject to the jurisdiction of any court in respect of the exercise by him of those powers."

Another show-down with the judiciary loomed large, when he declared that he will not respond to the notice of SC.  "As Speaker of Lok Sabha, I used my discretion because the matter concerns the House and is of utmost importance. Noting could have justified corruption. I think the issue is outside the purview of the judiciary since Parliament has right to decide such cases on its own", he said.

"Rule of law has to be enforced not by expanding any organ's extent of powers, by encroaching into areas specifically assigned to any other, but by diligently and effectively discharging each one's assigned responsibilities.

In the interests of harmonious functioning, I believe that no one organ of the State should usurp the functions which essentially belong to another, nor should it abdicate its essential functions and thereby upset the well-cherished principles of separation of powers and checks and balances provided by our Constitution", he added.

From his words, it is clear that he could not tolerate any deviation from the Constitutional scheme, whatever be the expediency. His decision to expel the MPs was upheld by a Constitution Bench decision of the Supreme Court in Raja Ram Pal v Speaker, Lok Sabha (2007) 3 SCC 184. In the decision, it is specifically noted that the Speaker did not appear in response to the notice. The expulsion was defended by the Union of India. Though the Court accepted the primacy of Parliamentary privileges, it held that judicial review of Speaker's decision is possible in exceptional circumstances. "Proceedings (of Parliament) which may be tainted on account of substantive or gross illegality or unconstitutionality are not protected from judicial scrutiny", held the bench.

Chatterjee was not happy with this conclusion made by the Supreme Court. He felt that the Court was rewriting Constitution under the guise of exercising judicial review.

He had to undergo another test of character in 2008, when CPI(M), then an ally of UPA, withdrew support to the government and moved an no-confidence motion over disagreement with India-US Nuclear Pact. The party leadership wanted Somnath Chatterjee to resign from the Speaker-post. However, Chatterjee refused to do so. He was of the strong belief that Speaker was above political considerations, as it was a Constitutional post. Therefore, he said that as an incumbent of a Constitutional post, he cannot obey party commands. Such a stand was unprecedented, as no Speaker ever in the history of Indian politics has hidden his political loyalties.

Commenting on the situation, the Telegraph wrote :- "Mr Chatterjee should do his duty, not his duty by his party, but his duty as a holder of an important constitutional office. Mr Chatterjee has been an extraordinarily successful speaker and before that he has been an eminent parliamentarian and lawyer, he needs nobody to tell him the importance of the Constitution. If he resigns as speaker he will set a very bad precedent; if he refuses to resign he will be remembered as a speaker who stood firm by the Constitution. The choice is between being a party loyalist and being a public figure. The fact that Mr Chatterjee did not immediately accede to Mr Karat’s request to resign is a positive sign. Mr Chatterjee holds in his hands a crucial issue of Indian democracy. It might by far be the best thing he ever did if he does not resign".

Such was the depth of character of Chatterjee that he could rise above his party loyalty, to uphold his allegiance to the Constitution. But that cost him his party membership. "It was the saddest day of my life", he said about the day when he was expelled from party for his refusal to resign from the post of Speaker.

In the matter of Constitutional interpretation, Somnath Chatterjee must have been an originalist-puritan, who believed in the sanctity of the words of the Constitution, which should not be tinkered with to suit the expediency of the moment. He would have preferred to think that Constitutional text is strong enough to provide answers to all questions posed by the present, if one has the patience and foresight to look through it. He had his reservations about the basic structure doctrine, despite being a staunch opponent of emergency. He was of the opinion that judges are out of touch with the pulse of the society, and hence should not deliberate upon political issues.

Originalism may be a waning school of thought these days, as it is regarded as a bondage to the wisdom of past. Yet, one has to salute Somnath Chatterjee for his unwavering commitment to Constitution, over and above his personal interests.

The democratic and liberal spirit of Chatterjee is evident from an order passed by him as Speaker, deciding not to proceed against a press report which had published defamatory content against the Speaker and Parliament. He held that it would be beneath the dignity of the House to take further note of the motivated imputations in the article by proceeding against it.

He has expressed disappointment with the confrontational style of politics being practised in the new age, without any unified goal or purpose. "We may differ on ideology, but that does not mean we should be at loggerheads.", he commented.

With his demise, we have lost a true democrat whose prime loyalty was towards constitutional morality.