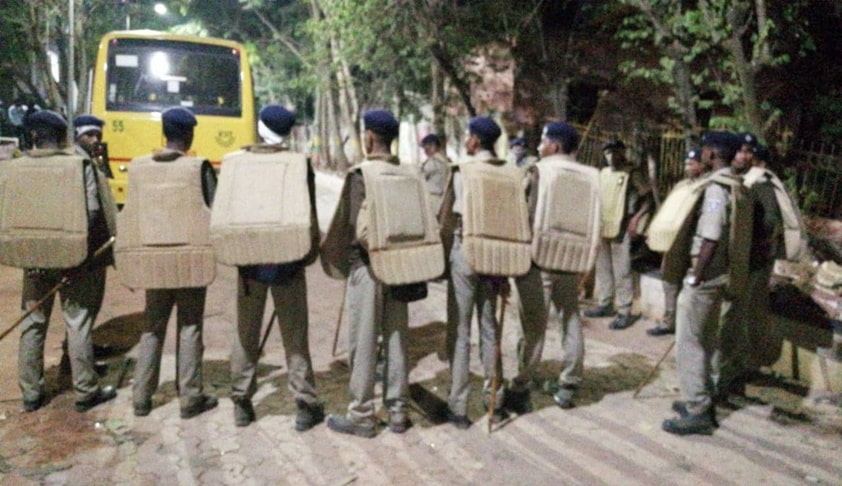 Violent clashes broke out at the Kalinga Institute of Industrial Technology (KIIT), Bhubaneshwar on November 24, between the Law School and the Engineering department.

At the heart of the discord is an incident that occurred a day before on the evening of November 23, when a second-year B-Tech Mechanical Engineering student allegedly harassed and teased a final year female law student.

As per a student’s account, it was only after police intervention and a hostel search that the boy presented himself and apologised to the girls.

However, just when they thought that the ordeal was over, the next day more than hundred engineering students allegedly turned up outside the Law School with beer bottles, sticks, bats, stones and even knives.

According to a law student, a few engineering students managed to enter the hostel building as well, and began beating up students and damaging property. One of the videos doing rounds on social media showed several boys cornering students just as they entered a lift, and pelting stones at them, beating them up with bats.

Since then, more than two dozen students have been injured, two out of these were even admitted to the intensive care unit (ICU), but have since recovered. Police intervention was sought again, however, students claim that officials arrived only an hour later.

Meanwhile, news of the clashes also spread panic amongst the locals. According to Odisha Bytes during the clash, vehicular traffic between Big Bazaar Square and Sikharchandi was disrupted.

The School of Law was then closed sine die, with the hostel being vacated at around 2:30 am on Sunday, November 25. Students allege that instead of taking charge of the incident, the college authorities transported them to the railway station in the middle of the night to fend for themselves thereafter. The SRPF has now been deployed since, according to the Quint.

Amidst allegations of the college administration having shirked its responsibility to ensure well being of the students, administration member and director of KIIT’s student activity centre Sucheta Priyabadini posted on Facebook around 1 pm today that the incident was being blown out of proportion and that “nothing has happened to any students and campus”:

“An incident of Eve- Teasing was reported day before yesterday as a consequence of which brawl arose between two group of students. Tension arose and was sorted without any delay. Yesterday it erupted again with the same 2 groups of students at conflict. To avoid further untoward incident we vacated the hostels located close to each other. After that it has been back to normal. No further incident has happened as it’s blown out of proportion in social media by vested interests. Nothing has happened to any students and campus. The protection and security of our students is our priority.”

The photos and videos doing the rounds, however, told an altogether different story, showing students ransacking the college and attacking other students.

Meanwhile, FIR No. 203/18 has been lodged at the Infocity Police Station. However, as of the time of this story being published, there has been no official statement from KIIT Management. Further, while a student source claimed that no arrests have been made since, according to a report, one Btech student who was identified using CCTV footage has been arrested by the police.