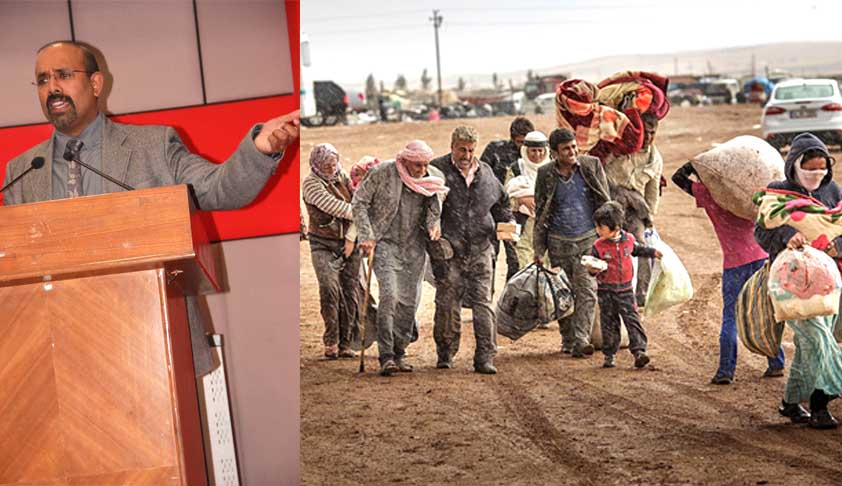 Prof. Sanoj Rajan is a professor of law specialising in International Law and Human Rights. Presently he is the Dean of School of Law, Ansal University, Gurgaon and an Affiliate Expert with Harvard Humanitarian Initiative, Harvard University, Massachusetts, US. Along with his academic experience, he has extensive involvement in International Human Rights practice, including statelessness...

Prof. Sanoj Rajan is a professor of law specialising in International Law and Human Rights. Presently he is the Dean of School of Law, Ansal University, Gurgaon and an Affiliate Expert with Harvard Humanitarian Initiative, Harvard University, Massachusetts, US. Along with his academic experience, he has extensive involvement in International Human Rights practice, including statelessness issues. Recently he has been instrumental in establishing an international coalition of Human Rights organisations working on Statelessness issues for Asia Pacific region as the coordinator of its Organising Committee. Lately, he has also been designated as one of the founding Governing Board members of this multinational endeavour. Live Law had a conversation with him on this experience and statelessness issues in the Asia Pacific region.

LiveLaw: Prof. Rajan, can you please tell us about Statelessness Network Asia Pacific (SNAP) and your role in its evolution.

Prof. Sanoj Rajan: SNAP is an independent, non-partisan and non-profit initiative driven by a diverse membership and its overall goal is to prevent and resolve statelessness in Asia and the Pacific. SNAP covers and derives membership from more than 50 countries in the Asia-Pacific region.

At this retreat, I was nominated as the coordinator for the SNAP's Organising Committee, through whichI coordinated the development of SNAP along with Ms. Davina Wadley a Human Rights Lawyer from Australia. The Organizing Committee was an interim expert body, which had 10 experts on Statelessness as members derived from 8 different countries. The Organizing Committee worked relentlessly over 18 months to establish SNAP which was finally launched at the Conference on Addressing Statelessness in Asia and the Pacific, which was held from 24-26 November 2016 in Kuala Lumpur, Malaysia. Representatives from over 40 organisations from across Asia and the Pacific and representatives from the United Nations High Commissioner for Refugees (UNHCR) attended the Conference.After the launch, I have been selected as one of the founding Governing Board members of SNAP, which came into existence on 16 January 2017.

Prof. Sanoj Rajan: Statelessness is defined as a situation wherein a person is not considered as a national by any state under the operation of its law. This may sound simple, however, the repercussions of this condition could be shocking. Statelessness may take away a person’s legal protection and may lead to many other grave violations of human rights. Populations who are stateless, or at risk of statelessness, often have limited or no access to basic human rights such as education, employment, housing and health services.  They are at a heightened risk of exploitation, human trafficking, arrest and arbitrary detention because they have difficulty proving who they are or links to a country of origin.   Stateless persons and those at risk of statelessness are also often unable to pay taxes, buy and sell a property, open a bank account, legally marry or register a birth or death.   Statelessness can also be a cause and consequence of forced migration.Some of these stateless persons are also refugees, which adds to these problems.The plight of the persecuted Rohingya community in Myanmar is a befitting example in this context.

UNHCR estimates that statelessness affects at least 10 million persons worldwide and that a stateless child is born every 10 minutes.  Asia and the Pacific have the highest concentration of stateless persons than any other region in the world. It is true that unlike other Human Rights violations, statelessness issues have not got much traction till recently, though the Statelessness Conventions came as early as 1951. It was only after the UNHCR came up with the Global Action Plan to end Statelessness in 2014, it got required attention.

LiveLaw: What would be SNAPs contribution towards ending statelessness in Asia Pacific Region?

Prof. Sanoj Rajan: SNAP’s overall goal is to prevent and resolve statelessness in Asia and the Pacific region. SNAP focus will be three fold, first to strengthen and support, and build solidarity and cooperation between stateless communities, civil society organisations, and other stakeholders working on nationality, statelessness, and related issues. Secondly to develop and support initiatives that promote solutions to statelessness. Thirdly to increase knowledge, visibility, and understanding on the right to nationality and the issue of statelessness

SNAP aims collaboration and information sharing between stakeholders on activities focused on preventing and resolving statelessness.   Cooperation and exchange between stakeholders will enhance individual actors’ impact and create opportunities for collective action. Further, the launch of SNAP is an important contribution to global efforts to address statelessness, including the Global Action Plan to End Statelessness, UNHCR’s #Ibelong campaign, the Global Campaign for Equal Nationality Rights, the Coalition on Every Child's Right to a Nationality, and the growth of complementary civil-society networks in Africa, Europe, North Asia and the Americas.

LiveLaw: How do you get interested in Statelessness issues, especially beyond the academic interest?

Prof. Sanoj Rajan: My attention was drawn towards statelessness in 2012 when I was doing research on Surrogacy related Human Rights violations. During this research, I found that conflict of nationality laws of various countries leads to statelessness of children born out of international surrogacy arrangements. I presented this research at the First Global Forum on Statelessness at The Hague in 2014. This topic was noted as the emerging trend in statelessness by UNHCR and put it as one of the concrete outcomes of the event. The research was again deliberated in 'Workshop on Researching Statelessness and Citizenship in Asia and the Pacific' in School of Law, Melbourne University, Australia in January 2016. The outcome of this research is coming out in February 2017 as a part of the 'World Statelessness Report' which is due to be published by Institute on Statelessness and Inclusion, at Tilburg University,Netherlands. Further Recently I have also completed another research on Statelessness among Hill Tamil Refugees in India supported by UNHCR and report is under consideration for publication by SNAP.

I also got the privilege to be invitedto the 2016 UNHCR – NGO Annual Consultations at Geneva, Switzerland where I moderated the session on Statelessness. I have also been a part of the 2016Global Strategic meeting on Statelessness at the Quaker United Nations Organization Head Quarters at Geneva and UNHCR 2016 Statelessness Retreat at Lausanne, Switzerland.

LiveLaw: What are your other areas of interest in Human Rights than Statelessness issues?