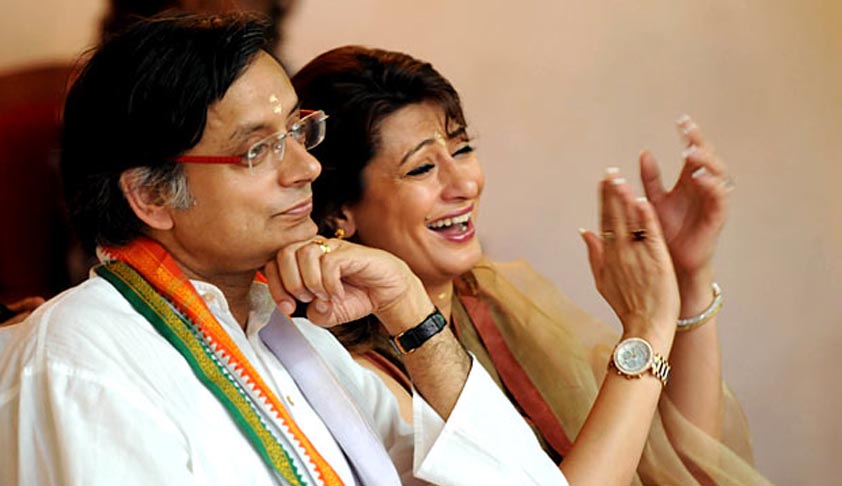 A PIL has been filed by the Anti Corruption Front, against the Direction of CBI, the Centre and the State Government, in Delhi High Court, seeking the Court's indulgence in the ongoing investigation Late Mrs. Sunanda Pushkar Tharoor, the deceased wife of Mr. Shashi Tharoor, a Former UN Diplomat and Formal Union Minister and presently the Member of Parliament in Lok Sabha.It demands a...

A PIL has been filed by the Anti Corruption Front, against the Direction of CBI, the Centre and the State Government, in Delhi High Court, seeking the Court's indulgence in the ongoing investigation Late Mrs. Sunanda Pushkar Tharoor, the deceased wife of Mr. Shashi Tharoor, a Former UN Diplomat and Formal Union Minister and presently the Member of Parliament in Lok Sabha.

Reasoning such a request, the petition says, "The death was happened in a mysterious circumstance, the body of the deceased carried more than 10 injury marks and the reason for the death was mentioned as poisoning. Even the Investigating Agency found it is a clear case of murder but till date the Investigating Agency is in dark, even a long one year passed after the incident occurred in a five star hotel in the heart of the capital of our country no convincing conclusion is come out with regards to the accused persons who planned and executed the murder."

It alleges that even though the incident occurred on 17 January, 2014, the FIR was registered only on 1 January, 2015, after a year. It hence demands reasons from the Commissioner of Police for "such serious dereliction of duty and latches on the part of his department in not registering an FIR in a case death of a lady within seven years of her marriage in mysterious circumstances."

The Petition asserts that the Delhi Police had violated the positive directions issued by the Supreme Court with regard to registration of FIR, in the case of Lalita Kumari vs. Govt. of Uttar Pradesh & Ors.

The petition categorizes this case as one where "top police officials were influenced and the accused have succeeded in their efforts by keeping the present case in cold storage for a period of one year." It hence challenges the credibility of the ongoing investigation.

They also bring to the Court's attention, the international ramifications of the case, and conclude that the present Investigating Agency is not equipped for such a large scale investigation, keeping in view of its "sloppy and laid back nature".

It further alleges that the Investigating Agency has not followed the correct procedure under Section 174 of the Cr.P.C. It says that the Police has consumed a miserably long time in the inquest proceedings. "The purpose of holding the inquest as per Section 174 Cr. P.C is very limited, it is to ascertain whether the person has committed suicide or has been killed by an animal or by accident or murdered or has died by some other reason raising reasonable suspicion that some other person has committed the offence. The inquest proceedings under the scheme of Code of Criminal Procedure cannot take place of an investigation. The Investigation Agency thus cannot take refuge of the said inquest report to say that based on the observations of the inquest, postmortem and the initial findings, the Investigating Officer did not think it appropriate to register a case of murder," it adds.

It hence questions whether the scope of holding inquest under section 174 Cr PC be considered as a substitute to the registering an FIR and the subsequent investigation?

It alleges that Mrs. Sunanda Pushkar had, shortly before her death, informed a Journalist friend that she had taken upon herself "the crimes of her husband" Mr. Shashi Tharoor during IPL controversy.

It further alleges that Dr. Sudhir Gupta, who headed the team of forensic experts that conducted the postmortem, had admitted that he was pressured by top officials to show the death of the deceased as a "natural death". He had further claimed, as per the Petition, that he was now being targeted because he did not bow to the pressure and gave a report stating that Sunanda's death was caused by drug poisoning that could be both suicidal or homicidal.

The Forum had filed another PIL before the Himachal Pradesh High Court at Shimla, seeking direction for formation of a Special Investigation Team to look into an alleged land scam by some influential people of the society. It brought to the Court's observation that the petition was entertained by the High Court in that case and a notice has been issued to the respondents.