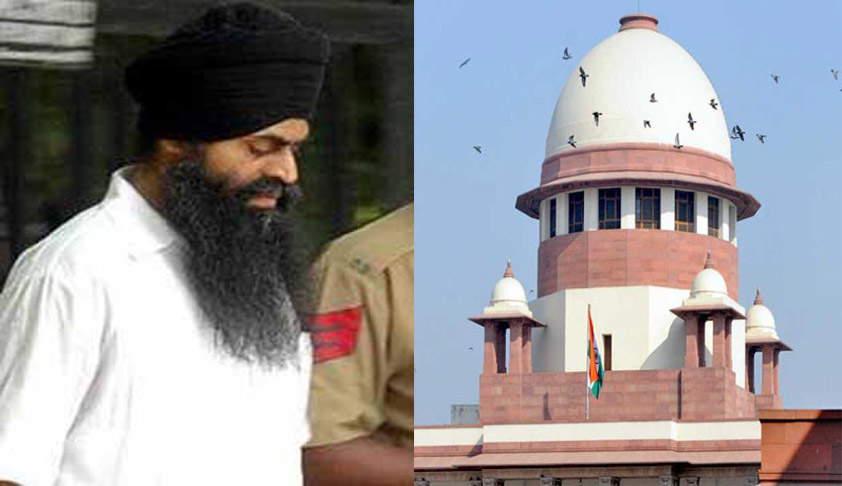 The Supreme Court Bench consisting Chief Justice P. Sathasivam, Justice R.M. Lodha, Justice H.L. Dattu and Justice S.J. Mukhopadhaya commuted the death sentence of Devenderpal Singh Bhullar, the 1993 Delhi bomb blast convict by allowing the curative petition filed by his wife. The rationale for commutation was due to the delay of eight years in disposing his mercy petition and his mental illness. The medical reports say that Devender Pal Singh Bhullar suffers from schizophrenia. In Shatrughan Chauhan & Anr. vs Union Of India & Ors. dated 21 January, 2014 the Court ruled that “unexplained and inordinate delay in deciding the mercy petition is a ground for commutation of death sentence to life imprisonment”.

The events which lead to the decision have been summarised chronologically.

May 2011: Mercy Petition dismissed after a delay of over eight years.

June 2011:  Writ Petition filed by the wife of Devenderpal Singh Bhullar for quashing the communication of dismissal of Mercy petition.

April 2013: The apex court holds that unreasonable delay of 8 years in disposal of mercy petition one of the grounds for commutation of death sentence to life imprisonment as per the established judicial precedents.

March 2014: The Central government intimates the Supreme Court that it has no objection for commutation of death sentence into life imprisonment.

31st March 2014: The Supreme Court allows Curative petition commutes the death sentence imposed on  Devender Pal Singh Bhullar into life imprisonment both on  the ground of unexplained/inordinate delay of 8 years in  disposal of mercy petition and on the ground of insanity.

In the Judgment delivered today it is said that “Learned Attorney General, taking note of the conclusion arrived at  in Shatrughan Chauhan (supra) wherein this Court held that the ratio laid  down in Devender Pal Singh Bhullar vs. State (NCT) of Delhi (2013) 6 SCC  195  is per  incuriam,  fairly  admitted  that  applying  the  said   principle   as enunciated  in  Shatrughan  Chauhan  (supra),  death  sentence  awarded   to Devender Pal Singh Bhullar is liable to be commuted  to  life  imprisonment. We appreciate the rationale stand taken by learned  Attorney  General  and accept the same”.

Regarding the medical ground  the Court observed that “In  addition,  it  is  also  brought  to  our  notice  by  letter  dated 08.02.2014, which was received  by  the  Registry  on  12.02.2014  from  the Institute of Human Behaviour and Allied Sciences, that the accused  Devender Pal Singh Bhullar was examined by the Standing Medical Board  on  05.02.2014 and the Board opined as under:

“1.The  patient  has  been  diagnosed  with  Severe  Depression with  Psychotic features (Treatment Refractory Depression) with Hypertension with Dyslipidemia with Lumbo-cervical Spondylosis with Mild Prostatomegaly.

2. He is currently receiving  Anti-Depressant,  Anti-Psychotic,  Anti-anxiety,  Anti-Hypertensives,  Hypolipedemic,   Anit-Convulsant (for Neuropathic pain) and Antacid drugs in adequate doses  along  with supportive  psychotherapy and physiotherapy.

3.  Patient  has  shown  partial  and  inconsistent  response  to  thetreatment  with  significant  fluctuations  in  the  severity  of  his clinical condition.

4. The treatment comprising of various combinations of pharmacological and non-pharmacological treatments  have  brought  about  partial  and inconsistent improvement in his clinical condition in the  last  three years of hospitalization. The scope for effective treatment options is  limited and thereby the chances of his recovery remain doubtful in the future course of his illness”.

The court rules; "The above report has been signed by the Director & Chairman as well as  four Members of  the  Medical  Board.   The  report  clearly  shows  that  he  is suffering from acute mental illness. The  three-Judge  Bench  in  Shatrughan  Chauhan  (supra)   held   that insanity/mental  illness/schizophrenia  is  also  one  of  the   supervening circumstances for commutation of death sentence  to  life  imprisonment.  By applying  the  principle  enunciated  in  Shatrughan  Chauhan  (supra),  the accused cannot be executed with the said health condition".