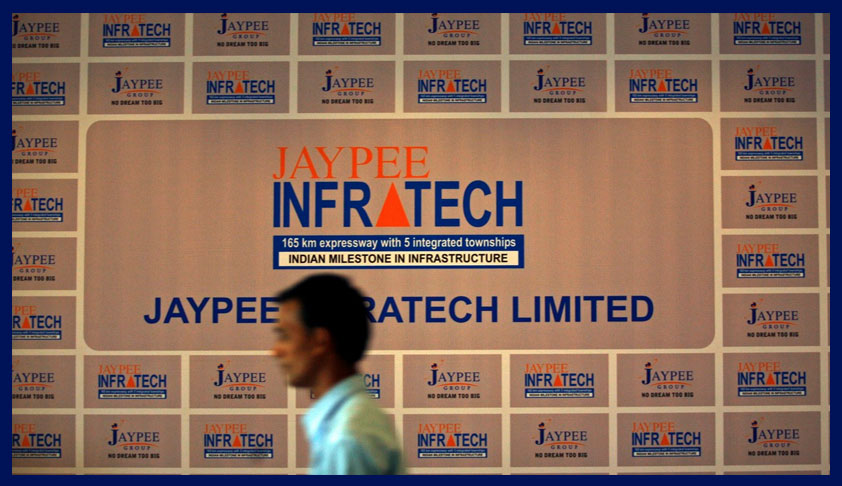 The judgment passed by the National Company Law Tribunal (NCLT), Allahabad in the matter of IDBI Bank Limited v. Jaypee Infratech Limited CP NO. (IB) 77/ALD/2017 (hereinafter referred to as "Allahabad Judgment") had been stayed by the Hon'ble Supreme Court by way of order dated 4th September, 2017 passed in the matter of Chitra Sharma & Ors. V. Union of India & Ors. being Writ...

The judgment passed by the National Company Law Tribunal (NCLT), Allahabad in the matter of IDBI Bank Limited v. Jaypee Infratech Limited CP NO. (IB) 77/ALD/2017 (hereinafter referred to as "Allahabad Judgment") had been stayed by the Hon'ble Supreme Court by way of order dated 4th September, 2017 passed in the matter of Chitra Sharma & Ors. V. Union of India & Ors. being Writ Petition(s) (Civil) No. 744/2017 (hereinafter referred to as the "SC Stay Order").

The said SC Stay Order has been vacated by the Hon'ble Supreme Court vide order dated 11th September, 2017 subsequent to an interlocutory application having been filed by IDBI Bank Limited (hereinafter referred to as the "SC Stay Vacating Order"). The reasons accorded for the same were that subsequent to the SC Stay Order the management of the debtor company being Jaypee Infratech Limited (hereinafter referred to as "Jaypee Infra") stood transferred again to the Management of the said company instead of the former Interim Resolution Professional (IRP), thereby prejudicing the rights of the creditors and consumers of Jaypee Infra.

The Hon'ble Supreme Court adjudicated on the said application and vacated the SC Stay Order directing the continuance of liquidation proceedings against Jaypee Infra in compliance with the Insolvency and Bankruptcy Code, 2016 (hereinafter referred to as the "Code"). Consequently the Apex Court has inter-alia directed the IRP to takeover the management of Jaypee Infra again and an amicus has been appointed to participate in the meetings of creditors to advocate the cause of the homebuyers.

Shift in the Management of Jaypee Infra – A Chaotic Move:

The adjudication meted out by the Hon'ble Supreme Court by first staying the insolvency proceedings against Jaypee Infra and now vacating the same has amounted to the management of the company oscillating between Jaypee Infra's management and the IRP. The stay on the proceedings resulted in the IRP returning the company's records to the company's management due to the absence of any directions provided by the Apex Court in relation to the status of the management of Jaypee Infra subsequent to the SC Stay Order. Within a week of passing the SC Stay Order, the same has now been vacated which will definitely give rise to complexities and logistical issues considering the fact that transactions within the span of last week were handled in a manner deemed fit by the management of Jaypee Infra. There is every possibility that such handling of transactions would not coincide with the strategy that had been formulated by the IRP prior to the SC Stay Order.

Is this actually a relief for homebuyers?

The SC Stay Order had been passed by the Hon'ble Supreme Court to provide some interim protection to homebuyers thereby giving the 30,000 homebuyers a slight ray of hope. Vacating the SC Stay Order and stating that the same has been done to safeguard the interests of homebuyers is ironical to the extent that the Code is silent on the specification of the category of creditors under which the homebuyers would fall. It is only Regulation 9A r/w Form F inserted vide Insolvency and Bankruptcy Board of India (Insolvency Resolution Process for Corporate Persons) (Amendment) Regulations, 2017 dated 16th August, 2017[1] (hereinafter referred to as "IRP Amendment Regulations") which provides for the procedure of raising claims by creditors other than operational and financial creditors thereby providing a legitimate status to the claims of creditors other than the ones provided for under the Code. Although the amendment has sought to provide remedy to 'other creditors' ambiguity exists with regard to the fact whether homebuyers come within the ambit of such 'other creditors'.

The effect of SC Stay Vacating Order remains to be seen. What is assured is the reversion of the homebuyers' position as it stood at the time subsequent to the Allahabad Judgment. In effect, the homebuyers may still file their claims, but whether the treatment would be the same as other financial and / or operational creditors is in doubt. From a homebuyers' perspective, the Hon'ble Supreme Court has appointed an amicus to 'espouse the cause of the homebuyers and protect their interests' during creditor meetings. Thus the creditors get a seat at the 'table' - the table being statutorily reserved for financial creditors. Common sense also dictates that the amicus so appointed would help in collection of the claims of the homebuyers, forwarding the same to the IRP for his consideration.

What we can be sure of is that the answer to this specific conundrum would not lie in the Code (unless clearly and suitably amended), and would in effect be in the successful and impartial handling of the claims of all creditors interested. It should be remembered that there is a school of thought that subscribes to the notion that homebuyers, like other financial creditors, would need to take a haircut on their investments, if parity is to be achieved. The resolution of this matter would be a litmus test for the stated objectives of the IBC. The aim of the enactment of the Code was to make India a favorable destination for doing business. What remains to be seen is whether the inclusion of investments from the common man be a ground for carving out an exception to this primary objective of the Code.