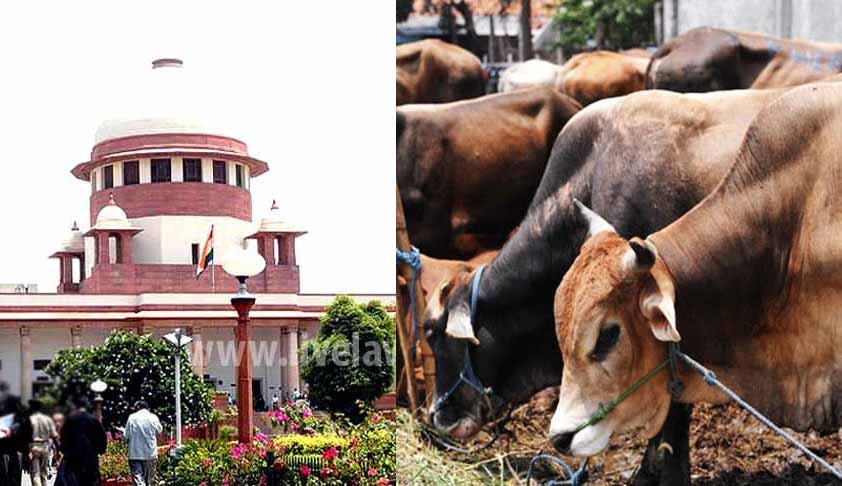 The prevention of cruelty to Animals (Regulation of Live Stock Markets) Rules 2017 were notified by the central government in order to regulate the animal markets and curb trans-border smuggling of cattle. As per the notification no one can bring cattle to an animal market unless he or she has furnished a written declaration that cattle will not be sold for the purpose of slaughter. Even if...

The prevention of cruelty to Animals (Regulation of Live Stock Markets) Rules 2017 were notified by the central government in order to regulate the animal markets and curb trans-border smuggling of cattle. As per the notification no one can bring cattle to an animal market unless he or she has furnished a written declaration that cattle will not be sold for the purpose of slaughter. Even if the notification does not ban slaughter, it is likely to have a major impact on cattle slaughter across the country.

The Environment Ministry has issued a clarification through a PIB press note stating that the notification is issued on the basis of the Supreme Court order dated 13th July 2015 in W.P. (Civil) No. 881 of 2014 filed by Gauri Maulekhi versus Union of India and others. The PIB statement itself clarifies that the order dated 13th July, 2015 is to frame guidelines to prevent animals from being smuggled out of India for the Gadhimai Festival held in Nepal where large scale animal sacrifices take place. But the question is whether Supreme Court has asked or directed the centre to bring notification banning the sale  of cattle in a live stock market for the purpose of slaughter?

Why Prevention Of Cruelty To Animals (Regulation Of Livestock Markets) Rules 2017 Is Unsustainable In Law?

Gauri Maulekhi approached Supreme Court in 2014 for banning illegal Trans boundary smuggling of cattle to Gadhimai Temple in Nepal for animal sacrifice. Senior Advocate Anand Grover, who appeared for Gauri Maulekhi brought the court’s attention to India’s Export – Import policy under the Foreign Trade (Development and Regulation) Act, 1992 which categorically place live cattle and buffalos in the restricted category of exports requiring a licence to legally export them. He further stated that this was being totally flouted as most of the animals were transported illegally through porous border without an export license.

On 3rd November, the bench passed another order directing Solicitor General Mr. Ranjit Kumar, to convene a meeting on 14th November 2014 to formulate the steps to check the illegal transportation of the cattles to Gadhimai Mela. The court requested learned counsel representing the States of Bihar, Uttarakhand, Uttar Pradesh and West Bengal to participate in the said deliberations. Solicitor General has informed the court that instructions have been issued to the Sashastra Seema Bal to ensure that animals are not transported across the border without licence. Solicitor handed over to the court, letter written by Ministry of Home Affairs which states that “desired that the movement of cattle for sacrifice during Gadhimai festival to be held Nov 28-29 be stopped. Approximately four lakh cattle, particularly buffaloes, are expected to be attempted to be smuggled to Nepal for sacrifice”.

Sashastra Seema Bal filed an affidavit in Court on the next date of hearing, ie 21/ 11/ 2014. The court directed SSB and all  concerned State Governments to address the issue on a long term basis. The bench asked all the respondent state governments to file its suggestions to stop illegal transportation of the cattles to Nepal and Bangladesh. On 13th March 2015 Supreme Court directed the Union Government to convene a joint meeting of the respondent States wherein the petitioner or his representatives may also participate so as to evolve a comprehensive future plan to effectively deal with the issue in hand. The court also directed to convene the meeting within two weeks.

Subsequently two meetings were held and joint settlement was formulated by all the respondents and handed over to the court. Based on the suggestions the court passed an interim order on 13/07/2015 which states

Ban On Trade Of Cattle For Slaughter, Does The Centre Have The Power?

Based on the acceptance of the proposals, we direct all concerned, to implement the same forthwith. Whilst doing so, it shall be imperative for all the concerned State Governments to constitute District SPCAs, in each and every District of the State, as per Rule 3 of the SPCA Rules, within four weeks from today. Likewise, the State Governments concerned are directed to constitute State Animal Welfare Boards, to supervise and co-ordinate with the District SPCA. The aforesaid State Animal Welfare Boards, shall also be constituted within four weeks from today.

All State Governments concerned are directed to submit compliance report to this Court, within eight weeks from today. The aforesaid compliance report shall be verified by respondent no.7, i.e., The Secretary, Animal Welfare Division, Ministry of Environment and Forests, New Delhi, within a further period of four weeks.

Nearly after one year, after this joint settlement was formulated, Mr.Anand Grover, learned senior counsel appearing for Gauri Maulekhi , informed the court that  no Rules under Section 38 of the Prevention of Cruelty to Animals Act, 1960 were not framed and it was a deficiency. Union of India informed the court that central government was bound to frame Rules in compliance of the provisions of the Act. On 12th July the court disposed the matter by passing an interim order stating that

Having heard learned counsel for the petitioner, and especially Mr. Sanjay Kumar Pathak, Advocate representing the Ministry of Environment & Forests, who has informed us that draft Rules have already been prepared, and are under process of finalisation, we are satisfied to direct the competent authority to finalise the Rules, within three months from today.

In 2015 anther Writ Petition filed by Akhil Bharat Krishi Goseva Sang (Akhil Bharat Krishi Goseva Sangh Vs Union of India W.P. (C) No 210 of 2015) came before the Supreme Court. The petition alleged that there was rampant smuggling of live cattles across the border to Bangladesh which has led to depletion of cattle wealth in the country. The main prayer of this petition was to direct the Union of India to take appropriate steps to prevent smuggling of cattle into Bangladesh and direct the states of Rajasthan, Uttar Pradesh, Madhya Pradesh, Bihar and Odisha to check illegal transportation of cattle and to check illegal loopholes by which cattle is transported to West Bengal and then to Bangladesh.

Responding to this petition, Solicitor General informed the court that a committee headed by a senior official of Home Ministry has been constituted for chalking out mechanism to stop cattle smuggling across India Bangladesh border. Solicitor General further informed the court that committee has held three meetings and framed draft recommendations, which include strengthening of institutional frame work, sensitization of enforcement agencies, stern action by animal husbandry department etc.

Both these cases were specific to curb trans-boundary smuggling of cattle. Arguments were on the illegal animal markets near the international border which are considered to be launch pad of illegal smuggling of cattle to Nepal and Bangladesh. The joint settlement proposal which was accepted by the Supreme Court on 13th July 2015 was formulated only in consultation with respondents in W.P. (Civil) No. 881 of 2014. Most of those respondents are states bordering to Nepal and Bangladesh. It is strange that joint proposals formulated to curb trans-boundary smuggling of cattle is used for regulating the animal markets in the country.   The Supreme Court has issued no directions to take steps to prevent ban of cattle sale for slaughter. That issue was not at all considered by Court.The directions of the Apex Court were to take steps to curb trans border smuggling of cattle. It is unfortunate that such directions are misinterpreted to justify the provisions in the Rules which impose ban of cattle sale in animal markets for slaughter. Dr. B. Balagopal has got Doctratre in Public Administration and he writes extensively on Law, Goverance & Public Policy. He Covers Supreme Court for Reporter TV.