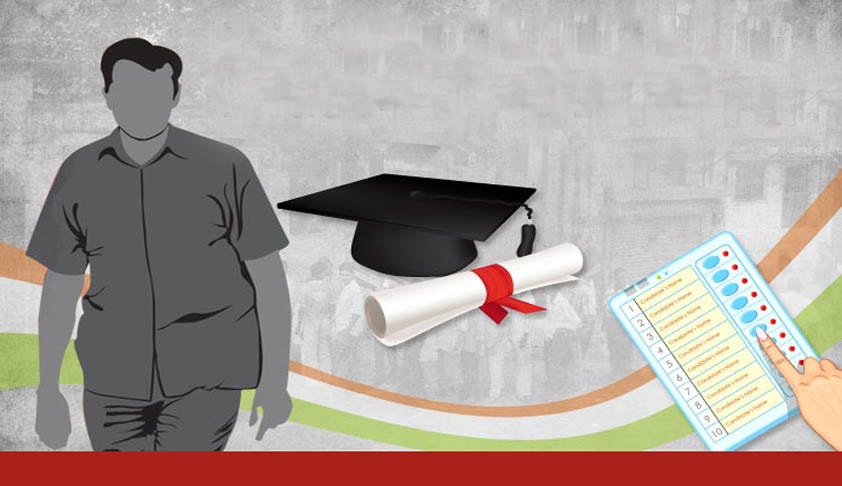 International Human Rights Day this year witnessed the highest Court of the country pronouncing a judgment that is being condemned as a blow to a most basic civil right, the right to vote and contest elections.The Bench, comprising Justice J. Chelameswar and Justice A.M. Sapre upheld the validity of Haryana Panchayati Raj (Amendment) Act, 2015 (Act 8 of 2015), which interalia introduced...

International Human Rights Day this year witnessed the highest Court of the country pronouncing a judgment that is being condemned as a blow to a most basic civil right, the right to vote and contest elections.

The Bench, comprising Justice J. Chelameswar and Justice A.M. Sapre upheld the validity of Haryana Panchayati Raj (Amendment) Act, 2015 (Act 8 of 2015), which interalia introduced the minimum educational qualification for candidates to contest the Panchayat elections. It held that both the rights namely “Right to Vote” and “Right to Contest” are not fundamental Rights but only constitutional rights of the citizen.

According to Senior Advocate and former Additional Solicitor General, Ms. Indira Jaising, the judgment effectively endorses an exclusionary principle, which disenfranchises 68% of Scheduled Caste women, 41% of Scheduled Caste men and over 50% of all women in Haryana from contesting a Panchayat election.

Ms. Jaising writes that the most ‘frightening thing’ about the judgment is the methodology adopted by the Court to reach its conclusion. She writes, “The court was for the first time in its history deciding whether the right to content an election was a constitutional right. For this reason alone, it was obliged to refer the case to a bench of five judges as required by Article 145 of the constitution. It did not do so, despite a plea to that effect, of which there is no mention in the judgment. The judgment is also unacceptable for the reason that it expresses the view that several earlier judgments of the courts on the concept of the right to vote were given in ignorance of the correct position in law. However, those judgments too were binding on this court and for that reason too, if the court disagreed with them, they were bound to refer the matter to a larger bench. Judicial discipline required that to be done.”

“Perhaps the public messaging on the Swachha Bharat campaign has entered so deep into the consciousness of the court that it has become its most prominent ambassador,” she adds.

While the Apex Court ruled that the disqualifications are “not unreasonable or arbitrary” and “do not violate the right to equality guaranteed by Article 14 of the Constitution”, activist Mr. Venkatesh Nayak of the Commonwealth Human Rights Initiative believes, “It ignores important international human rights standards that India has accepted and agreed.”

Highlighting the ‘irony’ that the judgment has been accused of possessing, Mr. Nayak wrote, “If you are a woman who is only a sixth class pass, you cannot contest elections in Haryana in the non-reserved category but you can successfully contest elections to Parliament from anywhere in India and become the Union Cabinet Minister for Water Resources and work to rejuvenate river Ganges.”

He asks, “What if some villages do not have any candidate who meets the necessary educational qualification? Will the Panchayat remain without an elected body?” He asks, “Can formal education alone be the benchmark for testing the intelligence of people? Can only formally educated people discriminate between good and bad and right and wrong as the judge held?”

A glimpse of Mr. Nayak’s apprehensions were brought to the fore by the Indian Express, when it published the tale of the residents of Nimkheda, a small settlement of 1,674 people in Haryana’s Mewat district, soon after the judgment was delivered. This community had created history 10 years ago by electing the country’s first all-women gram Panchayat.

The village has been showing significant development after the historical election. The literacy rate has escalated, and the practice of female foeticide and infanticide has been discouraged.

The Apex Court however discredits them of their attempts at betterment of their people with its statement, “it is only education which gives a human being the power to discriminate between right and wrong, good and bad”. None of the 10 Panchayat members is eligible to contest elections after the Supreme Court judgment. Further, the three seats reserved for women in the gram Panchayat may also go unrepresented, only a handful of the female adult population would qualify for the elections.

Another such instance is that of Rajbala, the outgoing sarpanch of village Sultanpurian in Sirsa who had studied till Class 4. The village won the swachh village award from the Haryana government. Rajbala is however, ineligible to contest again.

Bhartiya Janata Party Government had imposed similar restrictions in Rajasthan, a move which has since been viewed as furthering the discrimination and disadvantages that some communities have been subject to for years now. Condemning such a move, civil rights activist, Aruna Roy told Times of India, “If one looks at statistics of the currently elected representatives at the Panchayat samiti and zila parishad levels, one will see that more than 50% of the current zila parishad members and more than 70% of current Panchayat Samiti members would be disqualified as per the current Class 10 pass requirement.. None of these people can stand for re-election. These alarming levels of discrimination go up higher within reserved categories.”

This discrimination not only contradicts the fundamental feature of universal suffrage guaranteed to all citizens of India by the Indian Constitution, it also lays bare the State’s own failure in displaying allegiance to the Directive Principles of State Policy. Terming the judgment as a “body blow to justice for those most in need of it”, Mr. Mani Shankar Aiyer, Congress MP in Rajya Sabha, rightly points out, “They are being punished for no fault of their own. It is not that they refused to be educated. It is that the state failed to provide them the facilities to study, and is now thwarting their desire to serve their communities by banning them from even standing in, let alone winning, elections to local bodies.”

The judgment compels a diversion to the obtrusive functional administrative inadequacies of the country. The Court’s dubious logic in permitting entrustment of the reins of power to the ones with formal education, at the cost of the experienced ones exposes the inherent Indian ideology of equating education with intelligence, and degrees with competence. While formal education does provide perspective, disregarding traditional, informal education alienates the ingenious Indian representative of the masses.