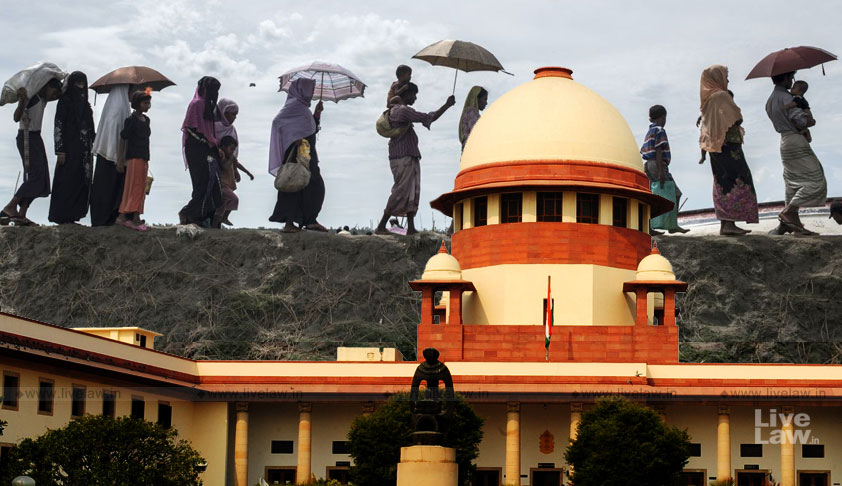 The Supreme Court of India on Thursday refused to stop the deportation of 7 Rohingya refugees to Myanmar. While, with the men minutes away from the border, the Bench agreed to hear the interim application in view of the grave urgency, the matter was dismissed. In doing so, the Supreme Court accepted the arguments made by Mr. Tushar Mehta, appearing for the Government, and  agreed that...

The Supreme Court of India on Thursday refused to stop the deportation of 7 Rohingya refugees to Myanmar. While, with the men minutes away from the border, the Bench agreed to hear the interim application in view of the grave urgency, the matter was dismissed. In doing so, the Supreme Court accepted the arguments made by Mr. Tushar Mehta, appearing for the Government, and  agreed that the Rohingya refugees were ‘illegal immigrants’ and that they had “consented” to return to Myanmar. The dismissal of the application has the possibility of becoming a dangerous precedent, specifically for the Rohingya refugees living in India, as several points of law were not considered.

In giving its decision, the Supreme Court erred  to make a distinction between ‘illegal immigrant’ and ‘refugee’, not taking into consideration the persecutory circumstances and grave human rights abuses which Rohingyas are fleeing, which makes them refugees entitled to international protection as soon as they enter an international border, which was India in this instance. This was also mentioned by Mr. Prashant Bhushan, Counsel for the Petitioner, who pointed out that every Rohingya coming in from Rakhine State, Myanmar is a refugee.

Further, the Court ought have appreciated the extremely perilous conditions to which these Rohingya men will be returning. The recently-concluded UN Human Rights Council’s Independent International Fact-Finding Mission on Myanmar has found Myanmarese military to be responsible for committing international crimes of genocide and crimes against humanity, noting that there is substantial evidence to suggest that the critical element of “genocidal intent” was present in the crimes committed against Rohingyas. The Report of this mission goes on to recommend that the repatriation of refugees should only occur when the conditions are safe, with explicit human rights protections in place, including citizenship; and that the current circumstances are not conducive for returns. Several other reports have also stated that Myanmar authorities have tortured and detained Rohingya refugees upon their return to Rakhine State.

This fear was also expressed by a UN Human Rights Expert who issued a statement on 2nd October 2018, prior to the hearing and deportation, stating that the move to deport the men would constitute refoulement and would be in violation of India’s obligations under international law. The principle of non-refoulment is an established principle of customary International Law, which prohibits the return or deportation of a person back to their country if there is a threat to their life or freedom there. This principle is also enshrined under Universal Declaration of Human Rights, International Covenant on Civil and Political Rights, as well as the Convention against Torture, all of which India has signed. The Delhi High Court has also abided by this principle in the case of  Dongh Lian Kham v. Union of India where they accepted the principle of non-refoulment and stopped the deportation of a refugee . Thus, causing these 7 Rohingya men to be sent back to a country where they are likely to be tortured and killed, or at the very least arbitrarily detained, is in flagrant violation of this inviolable principle.

During the hearing, the Petitioners reminded the Court that the Rohingyas are stateless and thus cannot be returned to Myanmar. However, the Affidavit submitted by the government official in response to the Application states that the Government of Myanmar was “able to establish the identity of these individuals as citizens of that country” and has “verified the nationality of these seven Myanmar nationals” and is issuing them a “Certificate of Identity”. This is particularly alarming, given that the Burma Citizenship Law of 1982 does not consider Rohingyas as citizens of Myanmar and there has been no public declaration by the Myanmar Government or other evidence to suggest any change in this policy. The Rohingya continue to be excluded from citizenship in Myanmar and are offered only National Verification Cards, which are merely a proof of residence. Thus, they continue to be stateless and are considered as foreigners in Myanmar.

Recent news reports have indicated that there are more Rohingya refugees who are detained in prisons in Assam. It becomes pertinent to ensure that they are given an opportunity to access justice, a fundamental right guaranteed not only by Article 14 of the Constitution but also previously read into the ambit of Article 21 by the same Court. In National Human Rights Commission v. State of Arunachal Pradesh & Anr., the Supreme Court clarified that Article 14 and Article 21 of the Constitution must extend to all foreigners, including refugees. It is always worth noting that the right to legal advice and assistance is of great value in ensuring justice, and if the same had been provided to those deported, it would have become easier to ascertain whether their consent to return was, infact, ‘informed consent’.

In the present instance, these Rohingya men had been in detention for the past 6 years and only the government had access to them. Even the UN Refugee Agency in a Statement has expressed concern that “these men did not have access to legal counsel and were not given a chance to access asylum processing.” Until recently, Courts have followed a humanitarian approach and allowed detainees to seek asylum. For instance, in Bogyi v Union of India, the Guwahati High Court stayed the deportation of a Burmese refugee, released him from custody and allowed time to seek refugee status from the UNHCR. This practice was also followed in  KhyHtoon and Ors. v State of Manipur, where asylum-seekers from Myanmar, had been detained due to lack of documentation, but were allowed to apply for asylum. Thus, it is possible that this prolonged detention in the present case had an impact on the men’s willingness to return to Myanmar, not only because they preferred returning to languishing in prison but also because they were most likely oblivious of the worsening and dangerous conditions in Myanmar.

To conclude, given that India does not have an Asylum law one has always looked towards the Supreme Court and the various High Courts to establish a strong refugee jurisprudence. In the past, there have been numerous judgments where the Supreme Court has been a beacon for protection of human rights, irrespective of ones’ identity or nationality. One remains hopeful that in the future, the Supreme Court would continue its rights-based and humanitarian approach. Pallavi Saxena is a Delhi based Lawyer works on Refugee Laws.