Swambhu Gau Rakshaks On The Road: Does Motor Vehicles Act Play Any Role? 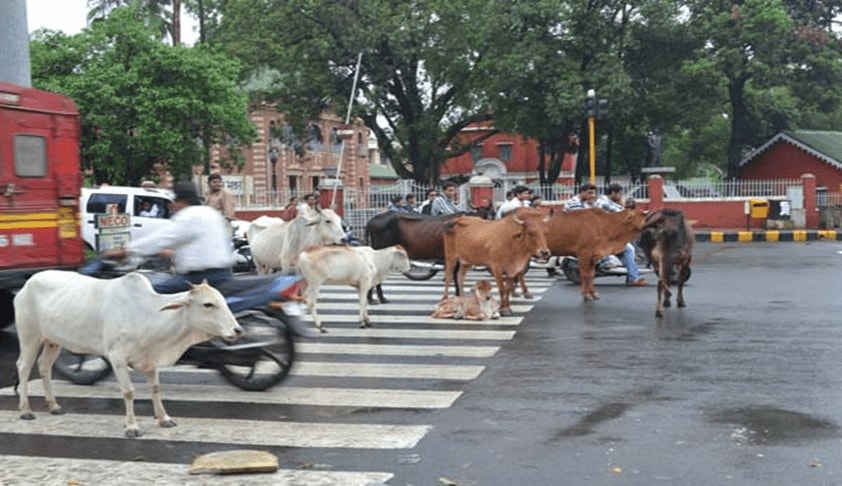 Come Janmastami (festival celebrating the birth of  Lord Krishna) and most of the cities in India would witness sudden rise of gau rakshaks (protectors of cows) armed with lathis (strong enough not only to control the cows, but even to hit human beings and damaging vehicles) on the roads meant for highway traffic.Often municipal corporations and police, especially the traffic departments of...

Come Janmastami (festival celebrating the birth of  Lord Krishna) and most of the cities in India would witness sudden rise of gau rakshaks (protectors of cows) armed with lathis (strong enough not only to control the cows, but even to hit human beings and damaging vehicles) on the roads meant for highway traffic.

Often municipal corporations and police, especially the traffic departments of many cities, face tremendous problem of managing cows, gau rakshaks as well as motor vehicles all together during such festivals.

However, cow menace on roads and highways remains a major problem in many cities throughout the year.

Noticeably, often irritated pedestrians or vehicle owners who may have accidentally hit cows sitting or standing in the middle of busy roads may also get humiliated, or even assaulted, by cattle-owners or the so-called gau rakshaks. Interestingly, in such incidences, the police may be mute spectators because the cattle owners or gau rakshaks may claim legality of their actions in hitting or damaging the vehicle or assaulting the pedestrians or drivers or threatening to harm or hurling abusive words to the latter.

The foundation of such legality is not necessarily the newly evolving concept of identifying genuine gau rakshaks by state machineries, but also certain ill- interpreted statutes, that have continued to give powers to cattle owners, including gau rakshaks, to attack, threaten to attack or to verbally abuse pedestrians, hawkers as well as motor vehicle owners and drivers.

One such legal provision is S.132(1)(b) of the Motor Vehicles Act, 1988, which speaks about the duty of driver to stop in certain cases. The provision states that “the driver of motor vehicle shall cause the vehicle to stop & remain stationary so long as may be necessary, but not exceeding 24 hours, when required to do so by any person in charge of an animal if such person apprehends that the animal is, or being alarmed by the vehicle will become, unmanageable”.

A plain reading of this provision may mean that the cattle owner may ask the driver of a motor vehicle to stop the vehicle if he feels that the movement of the vehicle or blowing horn may alarm the cattle to that extent that it may become unmanageable. The word ‘cattle’ has been explained to mean elephants, horse, came, ass, mule, sheep, goat or cattle (which may, in its linguistic meaning, include cows and bulls).

Now, it is presumable that majority of cattle owners may not have awareness about the Motor Vehicles Act, which speaks about the driver’s duty to stop to avoid man-animal conflict that may arise due to sudden panic in the animal; or even about the Indian Penal Code, which under S.268 (public nuisance), provides a contrary duty to the cattle owner to control his cattle and not to cause obstruction to the enjoyment of public right, which includes driving on public roads at regulated speed. But unfortunately in the present day, the concept of protecting the cattle from drivers and pedestrians have eclipsed the necessity of awareness regarding duties of cattle owners, including gau rakshaks, to not to allow the cattle to disrupt the free flow of traffic.

In certain cities like Delhi, Ahmadabad, and Mumbai or even in cities like Madurai, Salem etc, one may see numerous incidences of conflicts between cattle owners, gau rakshaks   and pedestrians and motor vehicle drivers, especially during festival times like Janmastami, Pongal etc. These festivals necessarily relate to cows, bulls or cow herds and the traffic system may see sudden growth of disruption caused by cows and bulls, which may be panicked beforehand due to ‘customary festival treatments’, like forcefully tying them for decorating the horns or skin, putting jingling bells or beads necklaces around the necks for the first time, which may be disturbing at the initial period or engaging the cows or bulls in customary games. It obviously becomes extremely difficult to manage the cows or the whole cattle herd which are already panicked and may tend to run helter-skelter. Often the cattle owners completely ignore their duties during this period.

But we also need to understand that cattle owners, including gau rakshaks, may ignore their duties to control the cattle or to keep the cattle off the roads, including highways even on non-festive periods. This again stems from the same ill-interpreted laws (including S.132(1)(b) of the Motor Vehicles Act, 1988) that apparently make the drivers and pedestrians sole responsible persons and not the cattle owners. It is, therefore, necessary to create awareness about the right interpretations of the Motor Vehicles Act and penal provisions, including S.268 IPC. It is hoped that if such initiatives are taken up by the stakeholders, including the government, rising problems related to gau rakshaks may be curbed to a certain extent.

[The opinions expressed in this article are the personal opinions of the author. The facts and opinions appearing in the article do not reflect the views of LiveLaw and LiveLaw does not assume any responsibility or liability for the same]
TagsIndian Penal Code Janmastami Motor Vehicles Act S.132(1)(b) of the Motor Vehicles Act Swambhu Gau Rakshaks
Next Story
Similar Posts
+ View more
Law Firms
+ More