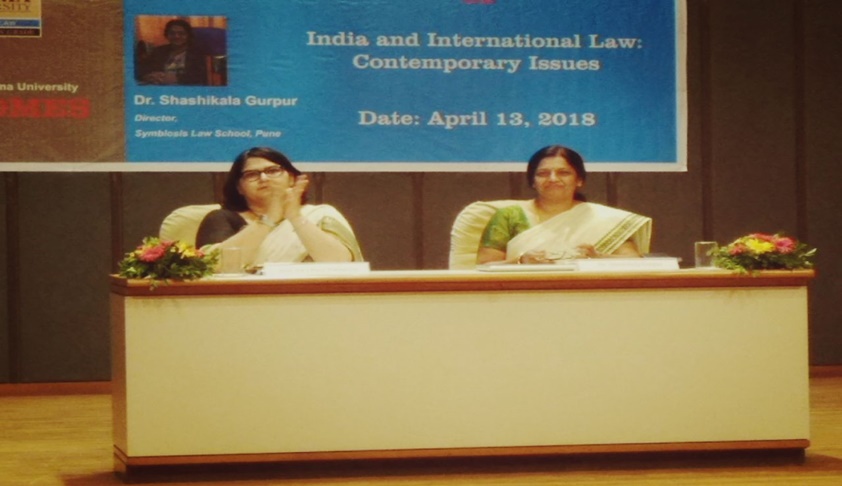 Symbiosis Law School – Pune director Shashikala Gurpur recently delivered a lecture on the topic ‘India and the International Law: Contemporary Issues’ at Institute of Law Nirma University (ILNU). She started her lecture by speaking about the Global Law Dean Meet held in Symbiosis, Pune, for which, she said, we need to keep legal education at a standard level, if not at a uniform level.

She motivated the students by urging them to keep their vision open. They should align their capabilities by exploring different fields like MUN, debating, mooting, etc. She started the topic by making it clear that India’s relationship with the rest of the world began much earlier than British Colonialism. She gave various instances for the same as to how the Parsis had landed in Gujarat for trade.

Similarly, in the 17th century, Gautama’s expansion of Buddhism and his visit to outside India for the same are the examples which prove India’s international history. She then gave the reference of Ramayana’s Sundarkand, where “Hanuman was not punished when he was caught while searching for Sita in Lanka,” it was due to sovereign immunity at that time as well. She claimed that international law was always there in India but we had never tried to determine it. Moreover, our current understanding of international law has become very westernized. We prefer reading foreign authors book like Malcolm Shaw for international law, while our Indian authors are also at par with these Western authors in terms of writing about international law, she said.

She then talked about the biggest challenges in international law which the United Nations (UN) is facing today. It includes HIV, refugee, and competition law. She then introduced a new topic of internationalization of Indian Law where she defined the caste problem from a sociological, legal and psychological view. Further, she told, for altering the caste system, just remove the endogamy.

Further, she talked about the International Convention on the Elimination of All Forms of Racial Discrimination (ICERD) of which India has adopted various features. She then covered another topic on Indianization of international law where an intersection was formed in the problems faced by the Maouri population of New Zealand and the Dongri tribes of Niyamgiri Hills of Orissa. Similar other cases were discussed where Indianization of international law has taken place. For example the Visakha Guidelines, etc. She also discussed various others topic of international law with references to India like Jadhav case and Italian Marines case. She described the concept of diplomatic immunity in India. And she ended her lecture by dealing with the loopholes that India has in its legal system due to which it is not able to comply with most of the international laws. In the end, she provided the names of Indian authors like Prof BS Chimney and RP Anand of JNU who have written extensively on the international law from a third world country approach.