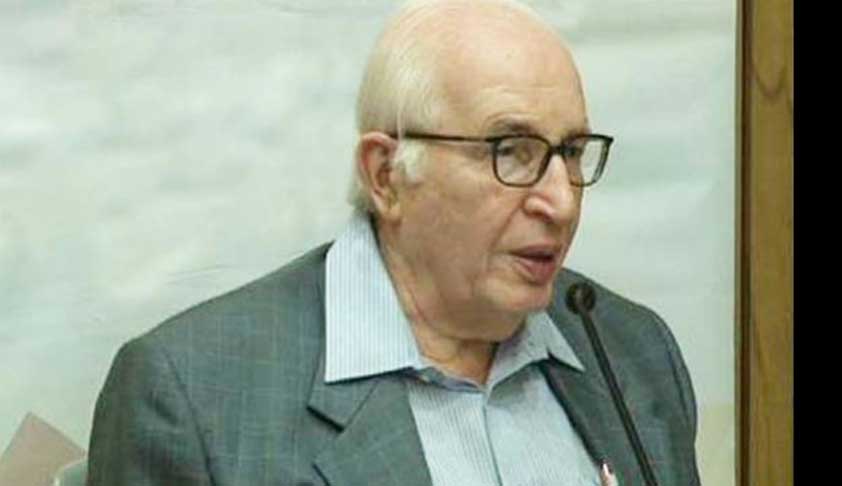 With the passing away of Mr. T.R. Andhyarujina this morning at Mumbai, the country has lost a legal luminary, who has been an integral part of the legal and constitutional history of India.Mr. Andhyarujina made his first mark on the pages of legal history with the epoch-making Kesavananda Bharati Case, popularly known as the fundamental rights case, which propounded the Doctrine of...

With the passing away of Mr. T.R. Andhyarujina this morning at Mumbai, the country has lost a legal luminary, who has been an integral part of the legal and constitutional history of India.

Mr. Andhyarujina made his first mark on the pages of legal history with the epoch-making Kesavananda Bharati Case, popularly known as the fundamental rights case, which propounded the Doctrine of Basic Structure or Framework of the Constitution, and followed by a number of landmark cases in the Supreme Court, relating to Human Rights and Constitutional Law.

Apart from his academic career as a professor in Constitutional Law in the University of Bombay and other reputed institutions, Mr. Andyharujina was the Advocate General of Maharashtra (1993-1995) and the Solicitor General of India (1996-1998). He was Chairman of the Committee on Banking Laws appointed by the Government of India in 1998. The report submitted by the Committee led to the enactment of the Securitisation and Reconstruction of Financial Assets & Enforcement of Security Interest Act, 2002 (SARFAESI Act), a statute designed to bring about transparency and accountability in the corporate world.

Mr. Andhyarujina’s book, “The Kesavanada Bharati Case: The untold story of struggle for supremacy by Supreme Court and Parliament” is a testimony to his legacy. He has interestingly narrated the background story and embedded it with insights regarding the principal actors, the judges and the lawyers, leading to the historic judgment. While recapitulating the Courtroom Drama, Mr. Andhyarujina brings to life various legal principles which proved to be of tremendous significance for preserving Indian Democracy. Immediately after pronouncement of the Kesavananda Bharati Judgment, assault was mounted on the independence of judiciary by the executive in the form of appointment of Justice A.N. Ray as Chief Justice of India by superseding the three senior most judges of the Supreme Court. The supersession of these Supreme Court Judges signified the onset of authoritarian rule of Mrs. Indira Gandhi. The country saw great upheavals in the form of the JP led People’s Movement against corruption and for Total Revolution that is to say, to bring about fundamental Changes in the Society. The assault on democracy was further accentuated by the declaration of Internal Emergency by Mrs. Indira Gandhi after she was declared disqualified by the Allahabad High Court, on the ground of corrupt practices. Lakhs of people were arrested and sent to jail and stories of large scale torture of prisoners created terror in the popular mind. The constitutionality of detention laws were challenged by the political detenus and nine High Courts in the Country held the detention laws to be unconstitutional. Contrary to popular expectations, the Supreme Court upheld the constitutionality of detention laws in the Habeas Corpus case (ADM Jabalpur). With this, the Rule of Law suffered a serious jolt and citizens lost all hopes to seek judicial remedy.

Mr. Andhyarujina’ personal association with Mr. H.M. Seervai needs also special mention for the reason that though Mr. Seervai appeared on behalf of the State of Kerala in the Kesavananda Bharati Case, he was appalled by the proclamation of Emergency and the resultant assault on the Rule of Law. Mr. Seervai, after the supersession of the Supreme Court Judges, played a pivotal role alongwith Justices M.C. Chagla and V.M. Tarkunde in mobilising popular opinion against Emergency and in support for restoration of the Democratic process.

Mr. Andhyarujina, as a leading Advocate for Human Rights conducted several cases in defence of civil liberties. I fondly recollect having assisted Mr. Andhyarujina in Supreme Court representing a group of indigent workers in the Railways who were known as ‘Roti Rams’, as they were not paid any wage. This group of workers survived only on the food supplied by the Railways Catering and paltry tips they received from the passengers. Mr. Andhyarujina fought this case pro bono  and it was a pleasure assisting him in such cases, defending civil liberties of the downtrodden.

Our Bar will miss an affable and warm-hearted elder brother, who came out with unstinted support for any cause protecting Human Rights and Rule of Law in the country. Ashok Panda is a Senior Advocate in Supreme Court of India.