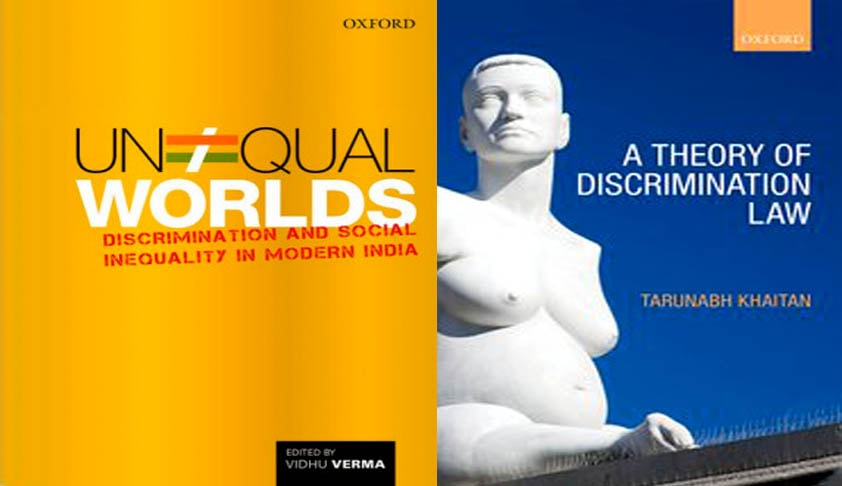 A THEORY OF DISCRIMINATION LAW BY TARUNABH KHAITAN, OUP, 2015, Rs.645, Pages 262.UNEQUAL WORLDS: DISCRIMINATION AND SOCIAL INEQUALITY IN MODERN INDIA.  Edited by Vidhu Verma, OUP, 2015, Rs.995, Pages 422.Tarunabh Khaitan, who teaches law at Wadham College, University of Oxford, is a scholar known for his sensitivity to discrimination against and suffering by less privileged people in...

Tarunabh Khaitan, who teaches law at Wadham College, University of Oxford, is a scholar known for his sensitivity to discrimination against and suffering by less privileged people in India.  Recently, his scholarship in law helped him to draft the first law, proposing to establish a Equality Commission, to act on complaints of discrimination, at the instance of the Delhi Government.

Constitutions and laws generally impose obligations and duties on public authorities or state to ensure that there is no discrimination.  Khaitan shows that there are exceptions to this general rule.  Both in South Africa and European Union, constitutional texts have provisions that are worded broadly enough to impose non-discrimination obligations not merely on public authorities but also on private bodies.  The state generally shoulders a heavier burden of these duties than private persons – especially when it comes to affirmative action duties.

The right against discrimination  is usually understood to be an aspect of or related to right to equality.  Khaitan makes it clear that discrimination law is unusual and complex.  It protects all of us, but to varying degrees depending on the context.  In particular, he says, its protection depends on the sensitivity of the impugned act or omission to certain personal characteristics called grounds, and on our membership of a protected group.   This sensitivity to grounds is what distinguishes discrimination law from other welfare  measures such as legal guarantees to food, health care, housing.   Khaitan suggests that any theory of discrimination law must account for this ground sensitivity generally, and explain the basis on which the protected grounds are selected.  It must also justify the role that relative group disadvantage plays in determining the largely asymmetric protection afforded.

Antidiscrimination duties are imposed not on members of advantaged groups, but on certain categories of persons which primarily include the state, employers, landlords, and providers of goods and services.

In the chapter on Affirmative Action, Khaitan concludes that affirmative action measures must accrue a net benefit to members of protected groups, and that they should not be imposed mandatorily on non-state bodies, unless there are exceptional and compelling reasons for doing so.  He adds that the choice of beneficiaries of affirmative action should be backed by solid empirical evidence, and the measures should be regularly reviewed to assess their impact and revised or repealed in light of emerging social dynamics.

Khaitan concedes that only when enough of us internalize and pursue the values underpinning discrimination law voluntarily will human freedom be truly secured.  After all, Gandhi issued his talisman to individuals, rather than the state, he adds.  Therein lies this book’s message.

In the second book, edited by Vidhu Verma, Professor and Chairperson, Centre for Political Studies, School of Social Sciences, Jawaharlal Nehru University, New Delhi,  new dimensions of social inequality in the neo-liberal era are explored by contributors.  In the introduction, the editor notes that  the legal framework notwithstanding, it has not been possible to undermine a regime of discrimination and stereotyping, ideologies of natural inferiority, and economic domination.

There is a growing recognition among social activists, academia and policy-makers that Indian democracy has not addressed the question of discrimination adequately, the book suggests.  All the essays in the book refer to contestations and debates on equality.   In his essay, Anand Teltumbde argues that caste discrimination remains as powerful as ever in the post-independent period as it was under colonialism. Even after more than 60 years of implementing laws prohibiting caste discrimination, Dalits are relatively disadvantaged in housing, employment, and education, he says.  Nothing short of a major radical change in political economy can annihilate caste system, he suggests.

In his essay, Khaitan,provides an overview of the architecture of discrimination law as one binding the state alone, and its gradual extension through judicial law-making and then through legislation to private persons.

The chapter by Narendra Kumar explains how untouchability is reflecting in newer and nuanced forms in the modern institutions.  Poonam Kakoti Borah studies discrimination towards sexual minorities in India, from the perspective of existing laws.  With the Supreme Court’s Constitution bench set to examine afresh the challenge to Section 377 IPC, this chapter argues that reassessment of ideas of privacy and tolerance become imperative in order to fight discriminations, that emanates from our binary thinking.