Take Disciplinary Action Against J&K Lawyers: Lawyers For Democracy And Rule Of Law To BCI 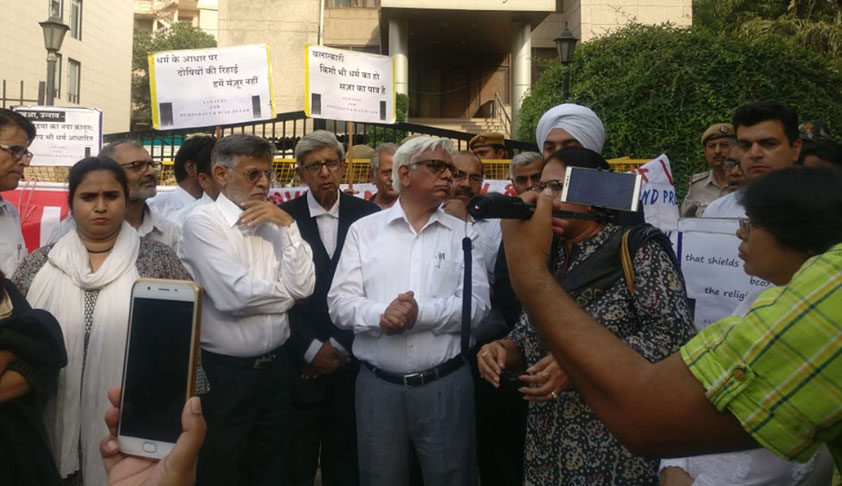 'Lawyers for Democracy and Rule of Law' has written to the Bar Council of India (BCI) demanding disciplinary action against lawyers of the State of Jammu and Kashmir who had allegedly called for a strike in defence of the accused in the matter of rape and murder of an eight-year-old girl in Kathua.

In a letter addressed to BCI Chairman Mr. Manan Kumar Mishra, the Lawyers' body asserts that while the Bar Council of Jammu and Kashmir should immediately have sprung into action, it has not done anything so far as it appeared to be hand-in-glove with the accused lawyers. It then asserts,

"It is the duty of the Bar Council of India to ensure that the lawyers conduct themselves within the bounds of law and professional ethics. The whole country is disturbed and dismayed over the way the Bar Associations and its lawyer members at Jammu have behaved in a lawless manner. The conduct of the lawyers at Jammu has shamed the entire legal fraternity in India. Now only the Bar Council of India can take remedial measures so that prestige and dignity of the legal profession, so badly shattered, maybe salvaged."

The letter points out that the lawyers had not just called for a strike but had also prevented members of the state police from filing a chargesheet in the matter in front of the Chief Judicial Magistrate.

It further highlights the fact that the Jammu High Court Bar Association had called for a Jammu Bandh, as well as objects to the use of the national flag by the lawyers in meetings. The letter states, "Mr. B.S. Slathia, the President of the Jammu Bar Association even issued a warning to the government, as per reports, that "today the Jammu youth was agitating with the national flag, but tomorrow they would have A.K. 47 rifles in their hands if their demands were not met."

Besides, the body also noted that the Bar Associations have demanded ouster of Rohingyas from the region, threatening that they would take matters in their own hands if adequate steps are not taken by the authorities.

It then submits that the lawyers of the Jammu Bar Associations have thus indulged in "serious acts of misconduct", alleging that the Bar Associations resorted to "extrajudicial methods" in defence of the accused, and asserting that their actions are "nothing short of subversion of the rule of law".

Thereafter, highlighting that Ms. Deepika Singh Rajawat, the Counsel appearing before the Jammu and Kashmir High Court on behalf of the victim's family has also been threatened by her fellow lawyers, it demands initiation of suitable disciplinary action against such lawyers.