You are taking the nation to suicide: Jethmalani to Finance Minister [Read the letter] 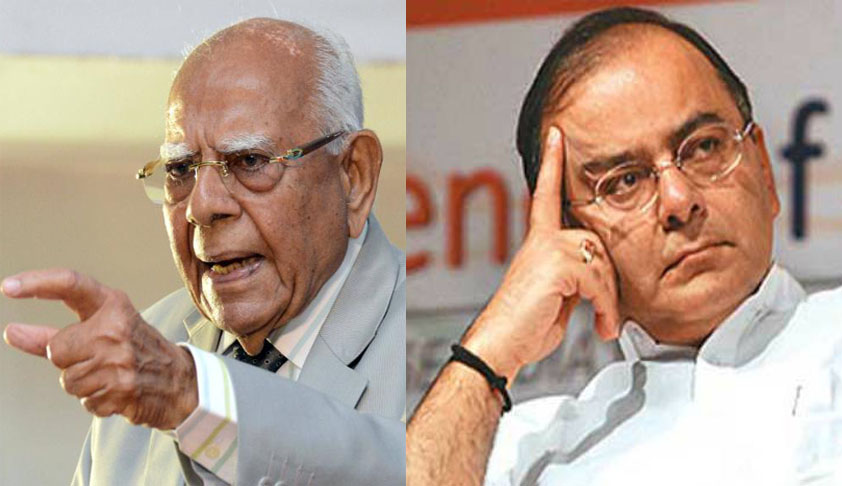 In a letter written to the Finance Minister, senior advocate Ram Jethmalani, addressing himself as the "expelled member of BJP", has accused him of being out there "to help the biggest criminals to escape." The letter says, "You were the Leader of opposition when the Germans announced that they were willing to share the names with any friendly country without cost or condition. No one from...

In a letter written to the Finance Minister, senior advocate Ram Jethmalani, addressing himself as the "expelled member of BJP", has accused him of being out there "to help the biggest criminals to escape."

The letter says, "You were the Leader of opposition when the Germans announced that they were willing to share the names with any friendly country without cost or condition. No one from the Government moved for the obvious reason that in all likelihood, according to me bigwigs in the ruling party were involved. The Germans never spoke of DTAT. Our people deliberately brought it in as a certain method of rendering the entire investigation futile and making our corrupt rulers escape arrest and prosecution. It was your duty as leader of opposition in the Rajya Sabha and Sushmaji's duty in the Lok Sabha to establish immediate contact with the Germans to get at the names. I strongly suspect that your conduct shows that you too like many others do not want truth to come out. Your public statements the thing on one say and another the next day are product of a troubled conscience and mental confusion, a deadly combination."

"You do not know much of criminal law and hardly anything about complex criminal investigations particularly the kind involved in the present case. You do not have the humility to learn from your intellectual and moral superiors," it added.

The Government, on Friday, had told a Supreme Court bench headed by Chief Justice H.L. Dattu that the names of those who have deposited money abroad cannot be disclosed because such a disclosure would jeopardize tax agreements with nations providing those names to India. The Centre asserted its stand in an application with annexures running into about 800 pages.

The petitioner, Jethmalani had then accused the government of protecting those who had stashed black money abroad and urged the court not to entertain the application. He stated, "Matter should not be entertained even for a day. Such application should have been made by the culprits and not by the government."

The letter says, "You recently had a near brush with death. This should have created in you a change in your moral make up and devotion to the nation. You are destroying what Modiji has built during the last election campaign."

In this letter, he also talks about the ratification provided to the United Nation Convention against Corruption, being used as pretence to cover a huge fraud which Jethmalani exposed.

According to Jethmalani, the Petition filed by the Finance Minister in the Supreme Court is "one of the most ill advised steps taken". It further reasons, "The DTAT or any equivalent document is not to be used and cannot be used. We are not dealing with persons or entities who by the Law of India and Germany are liable to pay tax in both countries on the same income. About 18 names are supplied to me under orders of the Hon'ble Court. Crooks like Hassan Ali do not exist amongst them. It is most unfortunate that you continue to act only on DTATS. This only shows your determination not to get any culprit apprehended or even identified."

He asserts that the nation is being taken to suicide and this might well be a method of taking revenge for snatching the office which he though belonged to him. Jethmalani finally added, "Please do not send names you have got from the Germans to the Swiss. Send them to the SIT so they can tell them what to do. The Supreme Court is monitoring the investigation, it is not an investigating agency."

Jethmalani had suffered another setback after his Advocate-on Record Karanjanwala & Company decided to withdraw their Vakalath because of Mr. Jethmalani's statement against Finance Minister Arun Jaitley and Attorney General Mukul Rohatgi. Read the LiveLaw story here.

The apex court had constituted the SIT headed by its former judge M B Shah on a plea of Jethmalani, who had moved the court for the purpose of getting black money back to the country. It had appointed its retired judges M B Shah as the Chairman and Arijit Pasayat as the Vice Chairman of the SIT for providing guidance and direction in the investigation of all cases of black money in the country and abroad.

Interestingly, the apex court had earlier rejected the same stand taken by UPA government, observing that such DTAA does not prevent the Centre from disclosing the names of the persons having bank accounts in foreign banks.

It had said the treaty has been drafted in a "sloppy" manner, and cautioned the Centre not to enter into an agreement which undermines the Constitution.

On DTAA, the apex court had in its earlier judgment said, "The fact that such treaties are drafted by diplomats, and not lawyers, leading to sloppiness in drafting also implies that care has to be taken to not to render any word, phrase, or sentence redundant…The government cannot bind India in a manner that derogates from Constitutional provisions, values and imperatives," the court had said.

"We have perused the said agreement with Germany. We are convinced that the said agreement, by itself, does not proscribe the disclosure of the relevant documents and details of the same, including the names of various bank account holders in Liechtenstein," the court had added.

The apex court after hearing AG's contention posted the case for October 28.

The SC had in May given the Centre an ultimatum to constitute a Special Investigation Team to probe black money cases. It had also ordered the Centre to disclose the identity of 26 persons who had bank accounts in the tax haven Liechtenstein. Read the LiveLaw story here.