Talk by Mr. Arvind P Datar on ‘The Constitution, Federalism and GST’ at NALSAR University of Law 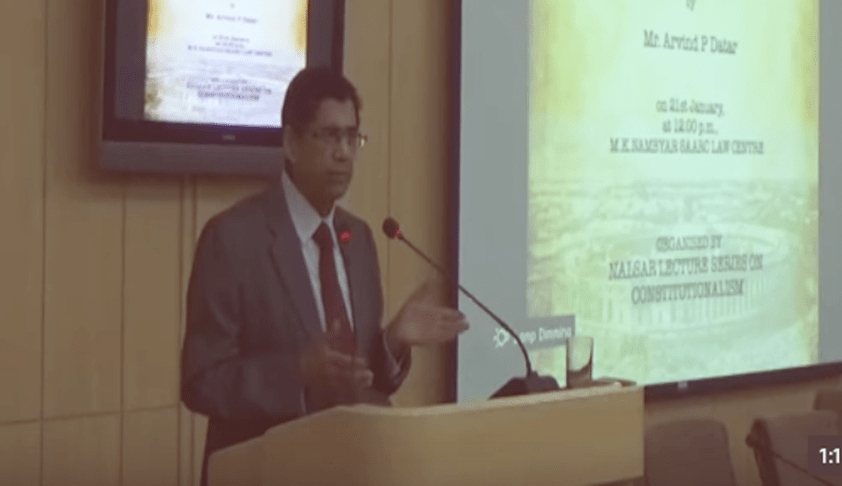 NALSAR University of Law, Hyderabad, hosted Mr. Arvind P. Datar on Saturday, 21st January 2017 for a lecture on ‘The Constitution, Federalism and GST’. This was the 3rd lecture held by the ‘NALSAR Lecture Series on Constitutionalism’ that was conceived and has been organised since July 2016. Previously Mr. Arghya Sengupta and Retired Justice Ruma Pal have been speakers in this...

Subscription starts from
₹ 1,499+GST
(For 1 Year)
View Plans
Premium account gives you:
Subscribe Now
Already a subscriber?
Login
NALSAR University of Law, Hyderabad, hosted Mr. Arvind P. Datar on Saturday, 21st January 2017 for a lecture on ‘The Constitution, Federalism and GST’. This was the 3rd lecture held by the ‘NALSAR Lecture Series on Constitutionalism’ that was conceived and has been organised since July 2016. Previously Mr. Arghya Sengupta and Retired Justice Ruma Pal have been speakers in this lecture series and have spoken on Judicial Appointments and Uniform Civil Code respectively.

Mr. Datar started with examining the history of GST and the way it has been operationalised in different countries. He noted that while the idea of having a uniform Goods and Services Tax is driven from the laudable aim of ‘one nation: one tax’, it has been corrupted beyond recognition in the current proposed GST. He criticised the GST as not meeting the aim of reducing tax compliance procedure and creating single market by having one tax. He observed that while in world over, GST means one uniform tax and one uniform tax rate in the country, our GST will result in all states having different GSTs, and one CGST and an IGST, essentially meaning more than 30 GSTs, along with sales tax and excise duty that are still applicable on articles like petroleum products, tobacco and industrial alcohol. He noted that while the GST Council is present to resolve disputes and coordinate among states, its decisions do not bind states and they are free to structure their respective GST regimes differently, resulting in the reproduction of the problem of lack of uniformity which is what the whole concept of GST was purported to resolve.

He further noted that the different slabs and different rates applicable under the GST for different items, is something that is not seen anywhere else in the world, and could lead to disastrous consequences. The larger issue he flagged out was that of this sudden shift from the existing taxing pattern to that under the GST and he said that this 'GST-migration' will be a very difficult one to go through, as the procedural complexities involved in the GST pattern are huge and may be especially disastrous for the small enterprises, with increased returns and compliances, coupled with lack of technical and IT skills in many cases. He also drew on his long practical experience to note that revenue target driven tax departments may become overzealous and make tax demands in creative ways that may negate the whole purpose of GST and observed that our maze of a tax system is the biggest stumbling block to the ‘Make in India’ dream. He also pointed out the difficulties that retail enterprises will face in claiming tax credits, especially for things like petroleum, which is out of ambit of the GST. In fact GST may lead to tax evasion, with small enterprises creating sister concerns to take advantage of the Rs. 25 lakh exemption.

He recognised that GST is going to be a reality soon, but suggested that it be implemented phase-wise/item-wise and not to all products at once (like the service tax was done), so that its problems and kinks can be addressed before a wholesale roll-out. He also suggested model SGST laws to bring uniformity.

While discussing the constitutional aspects, he noted that it is interesting that while GST has been introduced through Article 246A, there is no entry made into any of the lists in the Seventh schedule, though it does not necessarily bring constitutionality of GST into question. As an aside, he also discussed the doctrine of pith and substance and the aspects theory and said that we should not have introduced the Double Aspect Theory, which we borrowed from Canada and that the Doctrine of Pith and Substance is sufficient to look into the taxing powers between the Centre and the states. He noted that the way aspects theory is used in India, i.e. to find different aspects of one same contract/transaction and tax them twice is problematic and a better approach is to use the pith and substance test to determine which tax is more appropriate.

To aspiring litigants, he advised to engage in scholarly writing, which can engage them in serious reflection and bring them visibility. He also advised to remain patient and hard-working which will ensure success in the exciting field of law.

The video link for the talk is this