Does A Tax On Sanitary Pads Violate Article 15(1) Of The Constitution? 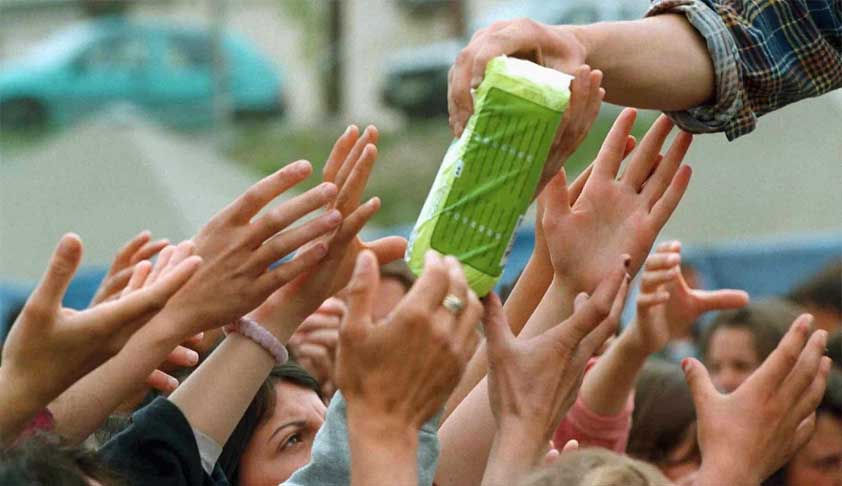 The last few days have seen a campaign asking for a removal of the tax on sanitary pads (which is 5% in Delhi, and goes up to 14% in certain states). It has been argued that the premise of taxing sanitary pads is that they are luxury items; however, their impact on reproductive health and the overall well-being of women, at home and in the workplace, marks them out as essential items...

The last few days have seen a campaign asking for a removal of the tax on sanitary pads (which is 5% in Delhi, and goes up to 14% in certain states). It has been argued that the premise of taxing sanitary pads is that they are luxury items; however, their impact on reproductive health and the overall well-being of women, at home and in the workplace, marks them out as essential items rather than luxury goods.

In this post, I will attempt to advance an alternative, legal argument: I will contend that a tax specifically on sanitary pads is unconstitutional, since it amounts to “discrimination on grounds… of sex“, which is prohibited by Article 15(1). While the argument itself is simple, the possible objections to it are many and complex; consequently, I shall address them in some detail.

Article 15(1) prohibits, inter alia, sex discrimination. Discrimination, both in its common usage, as well as in the understanding of the Supreme Court, broadly means to unequally allocate benefits and burdens among identifiable classes of people.

Sanitary pads, by definition, are used only by women. A tax on sanitary pads therefore amounts to a burden upon women. Or, to put it another way, but for being a (menstruating-age) woman, an individual would not be burdened by the sanitary pad tax. Under the classic definition, therefore, the tax discriminates on “grounds of sex.”

This probably sounds rather counter-intuitive. Perhaps the following analogy might help: would not a specific tax on crucifixes amount to discrimination on grounds of religion? If, intuitively, we think that it would, then there is every reason to hold that a tax on sanitary pads amounts to discrimination on grounds of sex: sanitary pads are, arguably, even more important for women than crucifixes are for Christians. That it does not intuitively appear to be so is probably because of a host of political and historical reasons, which have ensured that religious identity is salient in a way that sexual identity is not.

Let us now consider the objections.

Objection 1: The tax is on items, not on persons

The first, obvious, objection is that the tax in question is not a tax on women, but a tax on sanitary pads. Article 15(1) only prohibits discrimination “on grounds of sex“. It does not prohibit discrimination that will ultimately effect a particular sex only (readers will notice echoes of Koushal vs Naz, which held that Section 377 punished only acts, not people).

It is far too late in the day, however, to advance this argument. It is now firmly established, through more than six decades of constitutional jurisprudence (and indeed, pre-constitutional jurisprudence), that the correct test to be used in determining the constitutionality of a statute is not its object or form, but its effect upon rights. This was the holding of the Constitution Bench of the Supreme Court in Khandige Sham Bhat vs Agricultural Officer, in Prem Chand Garg vs Excise Commissioner, and – specific to Article 15(1) – in Anuj Garg vs Hotel Association. Consequently, the fact that the tax is not a tax on women makes no difference; the fact that it affects women, and women alone, brings it within the ambit of Article 15(1).

Objection 2: “On grounds only of…“

A second possible objection might point to the text of Article 15(1), which prohibits discrimination on “grounds only of… sex.” Focusing on the word “only“, the argument would then be that the tax does not burden all women, but only menstruating-age women who use sanitary pads. Consequently, it does not amount to discrimination on grounds only of sex, but “sex-plus”, as it were.

In the early years of Indian sex discrimination jurisprudence, various High Courts disagreed precisely on this issue. While some High Courts upheld putatively discriminatory laws on the basis that they took into account sex and other factors not within the ambit of Article 15(1), other High Courts held that Article 15(1) was applicable to discriminatory laws that were based on sex, and other factors “arising out of sex.” For our purposes, however, the controversy was put to rest by the judgment of the Supreme Court in Air India vs Nargesh Mirza, which held that pregnancy-based discrimination was hit by Article 15(1). The case of pregnancy, I would submit, is on all fours with the case of sanitary pads: not all women get pregnant, but only women get pregnant; similarly, not all women menstruate (and thereby need sanitary pads), but only women menstruate.

More broadly, jurisdictions world over are moving away from what the discrimination law scholar Tarunabh Khaitan calls the strict comparator test. In other words, it is no longer necessary to show, in order to make out a claim of discrimination, that a law must burden all members of one defined class, as opposed to the other. Discrimination law is shifting its focus, rather, to the question of whether laws disadvantage members of a class by virtue of their belonging to that class. That, as we have seen, is clearly the case here.

Readers will note that this argument restates the comparator claim in a more subtle form: the claim is no longer that the comparison must be between all women and all men, but that there must be something to compare to.

There are three responses to this argument. The first is that the logic of Nargesh Mirza covers this situation as well. In Nargesh Mirza, it was held that penalising pregnancy amounted to sex discrimination, notwithstanding the fact that men could not, by definition, get pregnant. Here, the State is penalising the use of sanitary napkins, notwithstanding the fact that men do not, by definition, use sanitary napkins. The analogy with Nargesh Mirza might not be immediately intuitive, perhaps because, on reflex, we think of pregnancy as a condition, and sanitary pads as an item of use. On the comparator logic, however, both are the same.

Secondly, we can restate Khaitan’s point that the focus of discrimination law is shifting from comparison to disadvantage. Discrimination law now sees as its focus the redressal of structural and institutional conditions that have been historically responsible for subordination on the basis of certain personal characteristics, such as race, religion, gender, etc. Placing a monetary premium upon menstruation fits within this particular understanding of discrimination.

Thirdly, let us go back to our hypothetical of a tax on crucifixes: there is no specific equivalent of a crucifix in other religions. Can we then say that a tax on crucifixes does not discriminate against Christians? The answer is no. Now, you might argue that the comparator there is other religious symbols, such as the Muslim skullcap, or the Sikh turban. Fair enough; but let us imagine that there are only two religions, Christianity, and Religion X, which has no “symbols“, but is an entirely abstract religion. Now, would we say that a tax on crucifixes does not discriminate on grounds of religion? I would submit that the answer would remain no, suggesting that the purpose of discrimination law is to remedy systemic disadvantage, and not necessarily search for comparisons.

While I am somewhat tempted to bite the bullet and say yes, a tax on aftershave lotion would be unconstitutional on grounds of Article 15(1), I think that there is a crucial distinction between sanitary pads and aftershave lotion, and that it is a distinction that is relevant to discrimination law. This distinction requires us to stress once more that the point of discrimination law is not to capture every instance of dissimilar treatment on the “grounds” set out under Article 15(1), but to remedy disadvantage. It is here that the arguments made by the political campaign – referred to at the beginning of the post – become relevant, because it has been shown that the use of sanitary pads is crucial to women’s reproductive health, as well as their participation in the workforce on equal terms with men. Placing a monetary premium on sanitary pads, therefore, is discriminatory because it disadvantages women, on grounds of their sex, in a non-trivial way. I am not sure if a similar case can be made for aftershave lotion.

*I am grateful to Suhrith Parthasarathy and Jawahar Raja for helping me think through some of the issues in this piece.

Gautam Bhatia is a Delhi-based advocate. He tweets at @gautambhatia88 and blogs about the Constitution at www.indconlawphil.wordpress.com. This Article was first Published here.