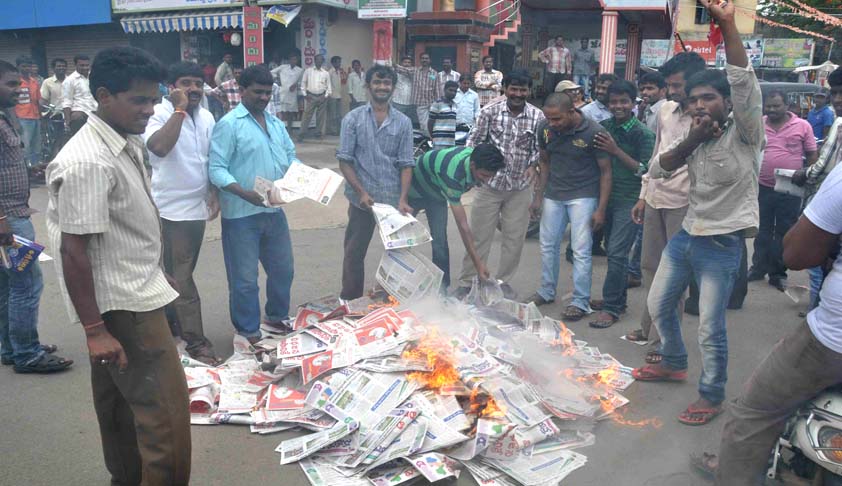 Voltaire [François-Marie Arouet (1694 –1778)], a French Enlightenment writer, historian and philosopher famous for his wit, advocacy of freedom of religion, freedom of expression, and separation of church and state, said:“I may disapprove of what you say, but I will defend to the death your right to say it”. What is happening in Telangana, the new state on tolerance to...

Voltaire [François-Marie Arouet (1694 –1778)], a French Enlightenment writer, historian and philosopher famous for his wit, advocacy of freedom of religion, freedom of expression, and separation of church and state, said:“I may disapprove of what you say, but I will defend to the death your right to say it”. What is happening in Telangana, the new state on tolerance to hostile media?

K Chandrasekhar Rao has been caught in the controversy for the first time as CM for his harsh comments against media saying media would be buried eight kilometres below and it’s neck will be broken if they do not stop insulting the legislators of Telangana. Though he used word media, he was specifically referring to abusive expressions against Telgangana legislators in tv9 after their swearing in during June 2014.

It is physically not possible and constitutionally not tenable to bury or break the media.  As far as Cable TV Network Regulation Act is concerned, a cable operator can be restrained from telecasting a program or stop a channel for a day but prohibiting tv channel completely is not a legally prescribed consequence.  Mrs Kavitha agreed that CM’s words could have been milder, but argued that the content was absolutely correct which reflects the opinion of the people.

The reputation of TV9 as innovative and investigative channel under the leadership of Raviprakash, a professional journalist, suffered severely with two nasty programs that led to Cable Operators (MSOs) to block this and another channel ABN Andhra Jyothi. Mr. Vemuri Radhakrishna, the MD of ABN channel challenged to point out which of his programs were objectionable. In an NDTV debate on 10th September, Mrs Kavita, MP and daughter of KCR said that every decision of CM was distorted by ABN because of its agenda.

If Telangana edition ‘criticise’ its Andhra counter part of Andhra Jyothi writes totally abusive report, she added. Radhakrishna answered he had to sell newspaper in two states. The  two version trend set by Andhra Jyothi followed by almost all newspapers. One local newspaper, The Hans India daily, for instance, published a banner about KCR meeting PM, on 7th September “KCR meets PM with big wishlist” in Hyderabad edition, whereas in Vijayawada it was “Live in peace with AP: PM tells KCR”. The core news is that PM reportedly suggested going for dialogue process”. Telugu newspapers magnify this distortion little more with several speculations and orientations.

Based on the resolution of Telangana House, the Speaker is supposed to take appropriate action against the ‘insult’ by tv 9 channel, which if he is convinced was contempt of House exercising constitutional powers to punish for breach of privileges. The Privilege Committee has to conclude about the breach only after giving the ‘accused’ editor of Tv9 due chance to defend himself.  Due process of law demands all this exercise. There is no such complaint is against Andhra Jyothi channel. This serious threatening word of KCR against media has affected the reputation of the Government and its advisors seriously.

The Constitution of India does not permit prior restraints on media. Even the judiciary did not allow prolonged ban or prohibition of the voices however unethical, hostile, defamatory or contemptuous they could be. A ban is serious violation of freedom of speech and expression, even though the expression is commercially designed, politically motivated, biased and also criminal. The ‘freedom’ lies in publication without prior censors, and if publication results in breach of rights, privileges or contempt then the consequences could be initiated, because, like press freedom, right to reputation is equally a fundamental right being integral part of Article 21 (right to life, liberty and privacy) of the Constitution. Telangana Government claims that it has nothing to do with the block out of two channels.

After around 100 days the banned channels planned protests like sitting in front of CM and ministers during public meetings with black ribbons around their mouths. As expected, CM was provoked. The channels also employed their women employees to take to streets, sit in dharnas and courting arrests which mean physically throwing them into vans, a clip that was repeated with critical comments, bringing media into agitation-mood. The BJP entertaining political ambition to rule Telangana and the Congress which believes that it was entitled to rule because it gave the state, naturally found the opportunity to attack the new government.

Mrs Kavitha says that real issue is prolonged tussle between media with vested interests and Telangana. She also pointed out that Telangana had tolerated critical and also hostile media consisting of 18 channels, except tv9 and ABN. The complaint is that tv9 abused and insulted legislators, the ABN was breaking the bridges between Seemandhra and Telangana, she has shown the instance of Andhra Jyothi report that no settler voted for TRS in Hyderabad. The anchor of NDTV doubted it and said none coulr write like that. But its MD justified it saying that was what happened in Hyderabad.

No Telangana media in AP

The fact to be noticed is that the Telangana Media or its views were never allowed inside the borders of present Andhra Pradesh prior to and after June 2, 2014 (day of Telangana formation). One Telugu Channel,  T News and Telugu Newspaper Namasthe Telangana are never seen in 13 Telugu districts. When Namasthe Telangana launched a campaign called Atmeeya Yatra (Cordial Tour) with a slogan “Vibhajana Vikaasanike” (Division is for development), its Ratham was not allowed to enter the border as the police arrested the journalists. They convinced them and entered Andhra, but the vehicle was attacked and destroyed. The bundles of special bulletins of newspapers were burnt. None talked about suppression of freedom of speech and expression. The Cable operators never allowed T-News in Seemandhra. It was interpreted that people never wanted it. The TRS pointed out that there was no demand from anywhere to remove the block out on tv channels, which should be understood that they do not want it. Another TV channel V6 was started by G Venkataswamy’s family industry which was very popular in ten districts and was initially telecast in Seemandhra also, but as its Telangana credentials revealed, it was stopped. It is Andhra’s silent prohibition for ever verses Telangana MSO’s proclaimed ban. Still in Telangana, at least 18 channels dole out biased news against interests of Telangana and vehemently opposed bifurcation and the TRS party but survive without any hitch anywhere. MP Vinod said that telangana has the culture and civilization of hostile media. Who will question the intolerance Telangana media in Andhra, he asked.

One can get easy and huge publicity plus support of 80 per cent media in Hyderabad if only chooses to abuse TRS party and its government.  The content of abuse is directly proportional to publicity. This opportunity made some leaders who used speak in a dignified manner to stoop down and use dirty language.  The election time worsens the language further.  Anti-Telangana tongue-lashing will get further boost in debates over TV where anchors precipitate it to the level of verbal war and at times to fist fights too. It boils down to the rule of new news dynamics that verbal intolerance to hostile media will invite the ire of the society at large, where as the hostility in action will never be discussed.