“Tension and strain which I have undergone is unimaginable”. Justice K.S.Radhakrishnan [Watch the Video] 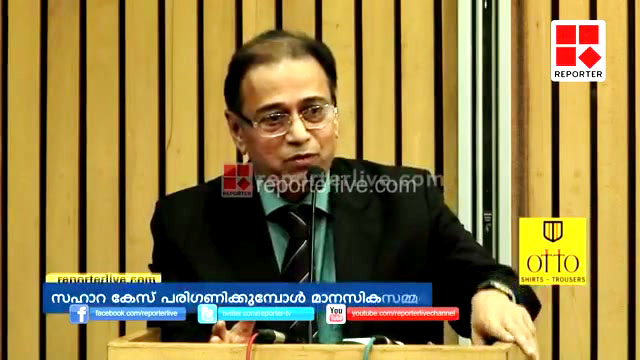 Justice K S Radhakrishnan while speaking on the occasion of a farewell given to him, said that he and his family had to undergo tremendous pressure. He said “I can’t say more because case is pending. But pressure, tension and strain which I have undergone is unimaginable. Already this pressure reflects on my wife and family also. It was that much a complicated case. See, it is not over so I can’t speak much on the Sahara matter”.  The judge was exceptionally discreet and responding like a true judge with dignity and discipline demanded. Again in the farewell function organized by Supreme Court Bar Association,  Judge made an unusual remark about Justice Jagdish Singh Kehar, who was his brother Judge on the bench which heard the Sahara Case.  Judge said “Justice Kehar’s “fearlessness is unparalleled in Supreme Court history”.

Though both Judges have not divulged about the ‘pressures’  exerted on them, a conjoint reading of  observations in the judgment and farewell comments  communicate certain unwelcome advances that might have been made by litigants.

The unconventional but piercing  ‘postscript’  inked in Sahara judgment gives an impression that judges wanted to tell something more than what actually written. The postscript, though carefully worded, reveals a piece of their mind.  It is an expression of agony, conduct of judicial restraint, and ignoration of  pressure from today’s litigants. It is a hope for support for officers presiding over Courts and simultaneously righteous indignation towards lawyers who act more than a ‘Lawyer.

Let us break up and  re-read para 147  from postscript:

a)  The number of similar litigants, as the parties in this group of cases, is on the increase.

b)  They derive their strength from abuse of the legal process. Counsels are available, if the litigant is willing to pay their fee. Their percentage is slightly higher at the lower levels of the judicial hierarchy, and almost non-existent at the level of the Supreme Court.

c)  One wonders, what it is, that a Judge should be made of, to deal with such litigants, who have nothing to lose.

d)  What is the level of merit, grit and composure required, to stand up to the pressures of today’s litigants?

e)  What is it that is needed to bear the affront, scorn and ridicule hurled at officers presiding over Courts?

f) Surely one would need superhumans to handle the emerging pressures on the judicial system. The resultant duress is grueling. One would hope for support for officers presiding over Courts, from the legal fraternity, as also, from the superior judiciary upto the highest level.

g)  Then and only then, will it be possible to maintain equilibrium, essential to deal with complicated disputations, which arise for determination all the time, irrespective of the level and the stature, of the Court concerned. And also, to deal with such litigants.

The message is loud and clear .

Read Live Law Story on Observations of SC against Bench Hunting, Bench-Hopping or Bench Avoiding in the Sahara Judgment here