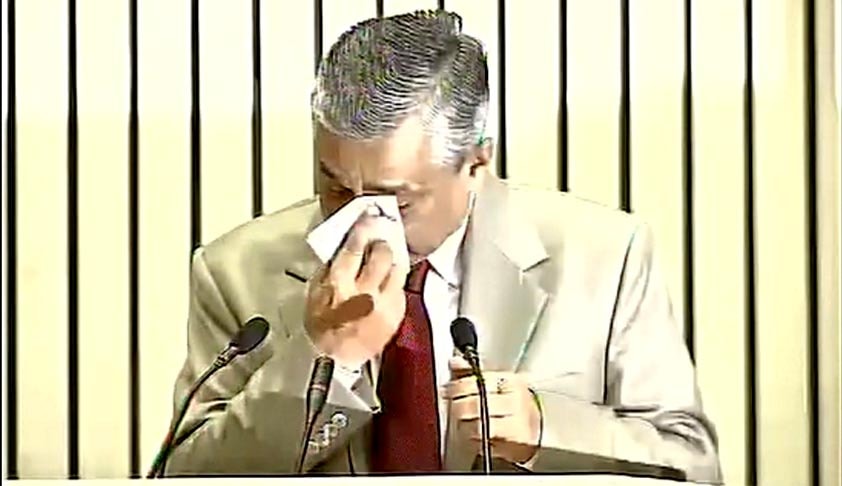 “Judges’ strength has been put in cold storage for past three decades. You cannot blame the judiciary alone for the high number of pending cases. In some petitions, we have to dispose ourselves in extremely stressful conditions. I request your Government to address the issue”, said an emotional Chief Justice of India today at CJ-CM Conference in presence of PM Narendra Modi.Blaming...

“Judges’ strength has been put in cold storage for past three decades. You cannot blame the judiciary alone for the high number of pending cases. In some petitions, we have to dispose ourselves in extremely stressful conditions. I request your Government to address the issue”, said an emotional Chief Justice of India today at CJ-CM Conference in presence of PM Narendra Modi.

Blaming Govt inaction for judges vacancies, the Chief Justice Thakur asked “Appointments of 169 High Court judges pending with Government. Jails are overflowing. 2/3rd jail inmates are under trials, how long will u take to clear files?”

WATCH: Chief Justice of India TS Thakur breaks down during his speech at Jt conference of CMs and CJ of HCs in Delhihttps://t.co/xD1tro8rmX

Justice Thakur also pointed out that in 1987 the Law Commission of India had said that there should be 50 judges per 10 lakh population and the successive governments have done nothing in this regard. No point of Make in India or FDI if judiciary can't function without efficacy, it is important to have more judges ", CJI remarked.

“Remember it is a recommendation of 1987.Several promises have been made that judges population ratio will be improved..several assurances, debates in parliament. People are languishing injails. But nothing really appear to be coming. It is not enough to criticize. You cannot shift the entire blame on the judiciary”, the CJI said looking at the Prime Minister

On why he turned emotional and broke down, the CJI said at the fag end of the speech: “If nothing else has worked in terms of the improving the condition of the judiciary, an emotion appeal may perhaps I thought”.

50 % REJECTIONS
Speaking at the Conference of Chief Justices and Chief Ministers conference, Chief Justice T S Thakur that while it made 143 appointments to the High Courts, approval for 169 were still pending with the government
Significantly the CJI said 50 percent of the proposals for high court judgeship have been turned down.
“50 of proposals sent to us were turned down as we have raised the bar. A slightest blemish against a candidate has resulted in his rejection. We do not want criticism about how people get appointed, much has been said about it" said CJI

RETIRED JUDGES TO COME BACK

The  CJI said as per a resolution passed in conference it has been resolved that apart from fresh appointments “which may take two months or so for completion we need to use the services of judges who have already proved themselves in the system. Article 224 of the constitution already provides for it..some judges who have served 30 years, 40 years who have risen from the ranks because of their integrity, any judge who has done well ..to ask them to go home will be a waste of talent”. This is because of the extra ordinary situation we are faced with ..because of the shortage of judges. The judges who are ready to work, they can be used for another two years or so”, said the Chief Justice

Referring to the speech of the Chief Justice of India, where he spoke of the large number of cases pending in various courts in India, the Prime Minister said that he understood the Chief Justice’s concern. He said that going forward, he hoped that the Government and the Judiciary could work together to find solutions to these issues.

The Prime Minister also stressed on the efforts being made by the Government to remove archaic laws from the statute books.

The Prime Minister also said “Why don't you reduce your holidays. I suggested this when I was Gujarat Chief Minister. I was criticized”

The Times of India has reported that, after the emotional Speech of Chief Justice of India, the Prime Minister has proposed a closed door meeting with CJI  to discuss the issues relating to appointment of Judges and Judicial Reforms

Here is the Full Text of PM's Speech (Hindi)