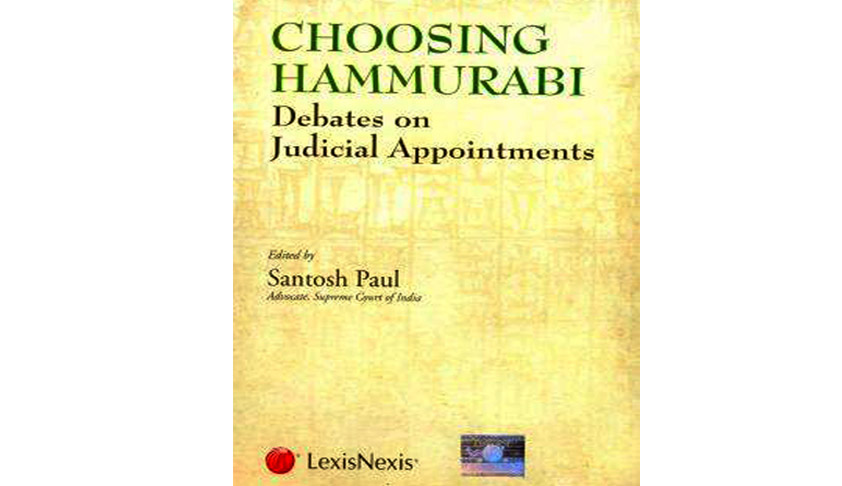 But when politicians talk thus, or act thus without talking, it is precisely the time to watch them most carefully. Their usual plan is to invade the constitution stealthily, and then wait to see what happens. If nothing happens they go on more boldly; if there is a protest they reply hotly that the constitution is worn out and absurd, and that progress is impossible under the dead hand. This is the time to watch them especially. They are up to no good to anyone save themselves. They are trying to whittle away the common rights of the rest of us. Their one and only object, now and always, is to get more power into their hands that it may be used freely for their advantage, and to the damage of everyone else. Beware of all politicians at all times, but beware of them most sharply when they talk of reforming and improving the constitution.

The World’s Most Powerful Supreme Court

On October 6, 1993, the Supreme Court of India, in one stroke, became the most powerful Supreme Court in the world. It had delivered its verdict in Advocate on Record Association v. Union of India (1993) 4 SCC 441.  By judicial legislation, it became the only Supreme Court in the world which could select and appoint its own personnel. These ended decades of tussle between the Executive and the Judiciary to gain supremacy in the power to make appointments to the higher judiciary. The decision was welcomed by most sections of the society barring a few exceptions. It was perceived as a welcome step in securing the independence of the judiciary. The following two decades saw the Supreme Court exercise its powers with complete confidence in its independence. We have seen the Court monitor the 2G spectrum scam, tackle the mining mafia, calibrating to ensure the end of manual scavenging, evolving principles for distribution of state largesse, scathing indictment of police atrocities to read benevolent drug pricing into the patents regime and scores of decisions which have been welcomed by the society at large. Yet in the midst of this soaring public esteem, it has become most vulnerable. In two decades, the societal consensus on the primacy of the Chief Justice in making judicial appointments has broken down and the voices which welcomed the decision became its vocal critics.  Justice Ruma Pal, a former judge of the Supreme Court expressed her sentiment:

The insulation of the judiciary from executive interference in the matter of appointment and transfer of judges is now almost complete. But the question remains, has this almost complete insulation achieved the object for which the constitutional interpretation was strained to an extent never witnessed before or after? In my opinion it has not.

I have been questioned by my publisher as to why I chose this esoteric title.  Why evoke the sixth king of the First Babylonian dynasty in year 2013? Why of all characters in history, choose Hammurabi, who is more known for his retributive dictum, `an eye for an eye a tooth for a tooth’ which jars against any modern judicial system.  I owe this  explanation to the reader as much as I owe it to the publisher.  The  people’s aspiration of what the modern judiciary should be, contrary to popular perception,  finds expression in the stone and clay tablets of  Hammurabi dating to  17th Century BC. These tablets,  reveal the author’s pronouncements as a ruler, to pursue justice,  to punish the guilty, to protect the weak from the powerful, to protect  widows and  orphans, to bring fair play and order into the society,  to be governed by defined laws and ‘to settle all disputes, and heal all injuries’. This yearning and desire of what constitutes an ideal justice delivery system is primordial. This yearning continues to this day, 4000 years after the earliest earliest known written legal code authored by Hammurabi.

The Constitution (120th Amendment) Bill, 2013 has been introduced and passed in the  Rajya Sabha. The aim and object of the amendment as benignly suggested is to ‘provide a meaningful role to the executive and judiciary to present their view points and make the participants accountable while introducing transparency in the selection processes. The Article 124A creates a Judicial Appointments Commission (JAC). It also provides that the Parliament will by law provide for the composition of the JAC. The law is the Judicial Appointments Commission Bill, 2013. The composition of the Commission is crucial and would determine whether the independence of the judiciary has been encroached upon or compromised in any manner.

The JAC Bill unfortunately has a mathematics which is far from comfortable. The Judicial Appointments Commission has the Chief Justice of India and two senior most judges, thereby bringing the total number the judicial members to three. Then there is the Law Minister and two eminent persons. The selection of eminent persons risks the taint of political appointments given the fact that the selection is made by the Prime Minister and the Leader of Opposition constituting a total of two and reducing the judicial component consisting of the Chief Justice to one. The U.K. Judicial Appointments Commission, in contrast, expressly excludes politicians and those connected with politics from being part of the Judicial Appointments Commission in order to secure the independence of the judiciary. In addition, Articles 217 and 222 vest the power of recommendation for appointing judges to the JAC and thereby removing the power of the Chief Justice and that of the collegium.

Section 4 is ominous. The JAC has also been vested with the power to recommend persons for appointment of the Chief Justice of India which means that the rule of seniority has been given a go by. Every senior judge would now face a direct threat to his being appointed as Chief Justice. Does it not amount to threatening judicial independence, given the position that three members of the six member commission would have an executive tilt? To seek the opinion of the government and the Chief Minister of State in the appointment process again raises the risks of political appointments which in turn jeopardizes independence.

The JAC Bill now runs the serious risk of Constitutional invalidation. The composition of JAC is strangely not a part of the Constitution but a mere creature of a statute and can be altered or modified with a simple majority in the Parliament. A body with such immense powers of appointing members of the higher judiciary (enjoined constitutionally to be separate and independent) being determined and constituted by a simple majority in the Parliament does not display constitutional wisdom. Hypothetically, in the proposed dispensation, nothing stops a parliamentary majority to decide that the Prime Minister and his two nominees will constitute the JAC. Besides the issue of independence, the other serious aspect which has so far been underplayed is the infraction of the rule of separation of powers. Judicial independence and separation of powers overlaps in the arena of appointments and dismissal.

The moot question which arises from the composition of the JAC and its impermanence, would be, whether it is in conflict with the position adopted by the majority opinion in SCAOR case that independence of the judiciary which is reflected by giving primacy to the opinion of CJI in matters of appointments and transfers. Justice Kuldip Singh supporting the majority opinion has stated ‘the independence of the judiciary is inextricably linked and connected with the constitutional process of appointment of Judges of the higher judiciary’ and that ‘to expect an independent judiciary when the power of appointment of Judges vests in the executive is illogical’. A constitutional challenge is imminent and inevitable. Much will depend upon the debates in the Court as to the dangers of an encroaching executive upon the appointments process and thereby jeopardizing the independence of the judiciary. But what is surprising is that the JAC Bill, 2013 which is modeled on the UK model has chosen to ignore its sine qua non viz. freeing the judicial appointments from the executive. The Judicial Appointments Commission of the United Kingdom categorically states on its website: ‘We were set up on 3 April 2006 in order to maintain and strengthen judicial independence by taking responsibility for selecting candidates for judicial office out of the hands of the Lord Chancellor and making the appointments process clearer and more accountable’.

Is Independence of the Judiciary Negotiable?

The power of the appointment and the independence of Judiciary are intrinsically intertwined and delicately balanced in our Constitutional structure. Independence of the Judiciary is sacrosanct and any rash tinkering can tip the balance which can have disastrous consequences for a constitutional democracy. But equally, seeking for a broader collegium on the lines of United Kingdom Model needs a serious exploration. There are several models to choose from. The appointments procedure in the USA is far too politicized which requires the politicians to both nominate and approve appointments. The intense political maneuverings in the US system can be attributed to the fact “that judges rarely oppose outcomes that are philosophically in accordance with the party which nominated and confirmed them” . In Germany, the United States system of political partisanship is whittled down by the requirement of a 2/3rd majority for the approval of a candidate. Therefore, the candidate must necessarily be acceptable to the divergent political views and hence the chances of political partisanship are to great extent eliminated. The Judicial Appointments Commission of UK has a clear edge to secure the independence of Judiciary as its composition is dominated by non-politicians. As against this, South Africa’s Judicial Services Commission is highly politicized and is comprised of 15 politicians and 8 lawyers which have all the ingredients necessary for the erosion of judicial independence. It is important to note that it is not the judiciary alone which want judges to be independent. Any civilized and democratic society requires an independent judiciary. As to what is independence is a moot question. Judiciary should be independent of the executive, of this, there is no doubt. But independence has a far wider connotation when it refers to the judiciary: judges must be free from not just the governments: judges must be independent of the parties to the dispute; of all external and internal pressures which may distort their verdicts; of all personal biases: and no doubt of more. The Universal Declaration on the Independence of Justice adopted in Montreal in 1983 records:

‘Judges individually shall be free, and it shall be their duty, to decide matters before them impartially, in accordance with their assessment of the facts and their understanding of the law without any restrictions, influences, inducements, pressures, threats or interferences, direct or indirect, from any quarter or for any reason.’

The United Kingdom’s model lays great importance on judicial independence with a wider consultative mechanism which perhaps may be the answer. In stark contrast, to the Constitution 120th Amendment Bill, the Judicial Appointment Commission of UK has no politician nor any person even remotely involved in politics (see the article ‘Choosing Hammurabi’). The United Kingdom model lays great emphasis in securing independence of the Judiciary. As Prime Minister Gordon Brown puts it, “The Government should consider relinquishing its residual role in the appointment of Judges”. It is therefore ever more important that the new system proposed now, is debated upon with the vigour it deserves.

Santosh Paul is an Advocate of the Supreme Court of India. He is the editor of the book titled `Choosing Hamurabi – Debates on Judicial Appointments’is slated for an international release.