“The Silence Of The Lawmen Does More Harm To The Society Than The Violence Of The Laymen”: Justice Kurian Joseph In His Farewell Speech 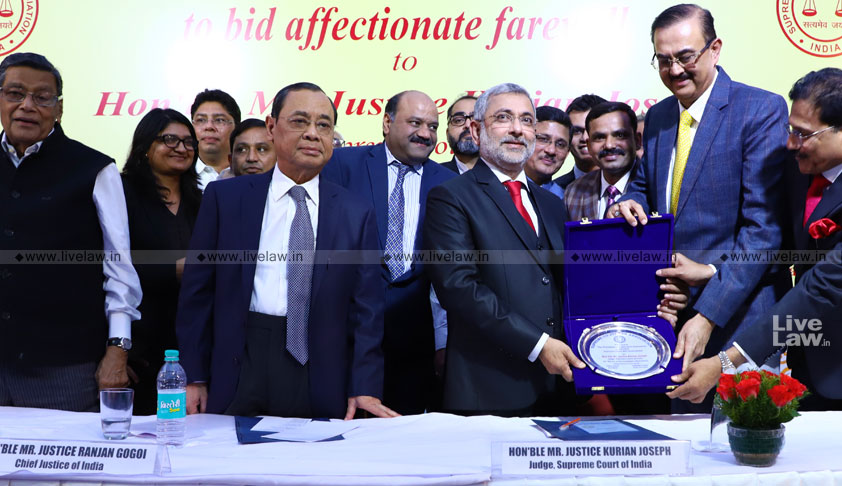 "That the Constitution is meant for everyone- the young and the old, the rich and the poor, women and children, and the marginalised- and that the compassion of the court is not charity but the bounden duty of a constitutional judge", articulated Supreme Court Justice Kurian Joseph’s poignantly at his farewell ceremony on Thursday.

He regarded the Constitution as the force that brings about unity in the absence of uniformity of culture, language, religion and philosophy and allows the diversity in the country to thrive without there being social fragmentation. The judge urged that in construing the Constitution, the heterogeneity of the society be borne in mind.

“The silence of the lawmen does more harm to the society than the violence of the laymen”, was his eloquent message to the members of the legal fraternity. In the wake of the considerable rise in the quantum of litigation under the garb of PILs, Justice Joseph dissuaded against burdening the courts which are already hard-pressed for time. That the law-makers are well-versed of the needs of the country and that they are governed by public interest and the constitutional ideals in framing the law, he assured, insisting that they must accordingly be given some credit and shown some faith.

He conveyed his interest in continuing work in the field of court-aided mediation, iterating that the settlement of one dispute averts as many as ten litigations. Advancing that a large proportion of arbitration proceedings eventually end up in court at the stage of enforcement of the award, he was of the view that a “mediation award” may better serve the ends of alternate dispute resolution.

While Attorney General K. K. Venugopal quipped that if there were to be a contest for the nicest judge, Justice Joseph would win hands down, Supreme Court Bar Association President and Senior Advocate Vikas Singh remarked that every lawyer would vouch that the judge patiently heard all matters alike, with a smile on his face. Justice Joseph recalled what he had imbibed from former Justice V. S. Malimath- that advocates, particularly the newer influx in the legal profession, if they are good in their arguments, must be appreciated and encouraged as that would go a long way in shaping their career. The third senior-most judge of the apex court expressed his contentment at demitting the position with a clear conscience, having adhered to the oath of his office as well as he could, having executed his job to the best of his ability.

In his turn, Chief Justice Ranjan Gogoi communicated that he is “afraid” and “apprehensive” about the future of the higher judiciary, with able judges, the likes of Justice Joseph, retiring, and the younger talent at the bar evading the judiciary.

He advanced that the Collegium is working very hard to find befitting substitutes at the bar, the members of which are no longer too keen on being a part of the higher judiciary.

The belief that the higher judiciary does not possess the same aura, the grandeur as before is a major discouraging factor, observed the Chief Justice. However, he was hopeful that an appreciation and understanding of the dedication and the sacrifice of the judges could revive this glory of the higher judiciary.

The AG hailed Justice Joseph for having gone out of his way to mediate and settle disputes. He even stated that the judge’s journey could be said to have been fulfilled when a ten-year old had sent him a handwritten note, thanking him for reconciling his parents who were at loggerheads with each other.

The AG also commended Justice Joseph for his decision to not accept any post-retirement jobs or appointments.