The story of how they became legal eagles 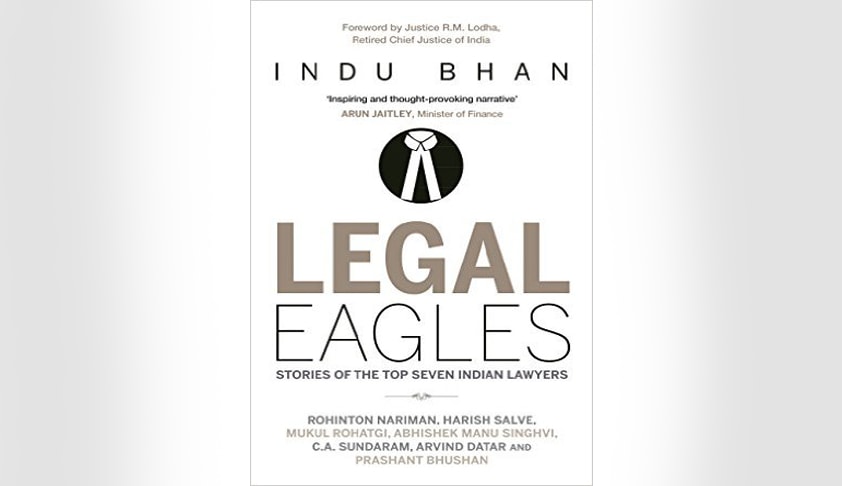 As compared to those lawyers who cannot be called legal eagles, a legal eagle is one who is clever and aggressive. Therefore, journalist Indu Bhan's book, [Legal Eagles, Random House India, Rs.399] narrating the success stories of the top seven Indian lawyers, would necessarily make its readers curious about what is so clever and aggressive about them that sets them apart from others of...

As compared to those lawyers who cannot be called legal eagles, a legal eagle is one who is clever and aggressive. Therefore, journalist Indu Bhan's book, [Legal Eagles, Random House India, Rs.399] narrating the success stories of the top seven Indian lawyers, would necessarily make its readers curious about what is so clever and aggressive about them that sets them apart from others of similar ilk.

Indu Bhan's choice of seven is partly influenced by practical considerations of narrowing one's focus for writing a book of this kind.  As there are surely more than seven successful lawyers, what justifies her criteria of including one and excluding someone else? Are those excluded in the book less clever and aggressive?  While one has to read the book to get the right answers, one can take her word that she narrowed her area of choice to post-liberalization era.  She regrets that she could not include a woman, despite being a woman.  But many would find her inability to find a woman subject for her book unconvincing.

That apart, there can be no dispute with her rationale that lawyers - top lawyers especially - contribute a lot to the reasoning of the Judges in their judgments, which become binding on all of us, but there is very little literature on successful lawyers.  But what makes them successful in the first place - or to borrow the literal meaning of the book's title - clever and aggressive?  A legal lineage, with parents also in the legal profession, certainly helps.  It is not surprising that parents of five of the seven subjects of Indu Bhan were or are successful lawyers.

Thus Harish Salve's legal career began when he assisted his father, who was a chartered accountant, in 1975 in actor Dilip Kumar's case.  Our present AG, Mukul Rohatgi's  father was a lawyer practising in Delhi and later became a judge of he Delhi High Court in 1972.  Abhishek Manu Singhvi's father, L.M.Singhvi was himself an eminent lawyer.

As he tells the author, "I could see law, I could smell law, and everything had the flavour of law at home".  Both Prashant Bhushan and Rohinton Nariman are children of hugely successful lawyers - Shanti Bhushan and Fali S. Nariman.  The author apparently had no choice but to include Rohinton in the book, despite his becoming a Judge of the Supreme Court during the time when her book was in the making.

As I turn my attention to the two lawyers, who hail from non-legal families,  I find that they too came under the influence of renowned lawyers very early in their lives, which helped them to choose law as their career.  Thus Arvind P.Datar, the son of a captain in the merchant navy, was spellbound by the lectures of Nani Palkhivala, which made him aspire to be a tax lawyer.  Datar showed his gratitude to his mentor by writing his biography recently.  Aryama Sundaram's (the book could have solved the mystery of why he is called Aryama, whereas in the court records, he is simply C.A.Sundaram) father, C.R.Sundaram was the Chairman of the National Small Industries Corporation, a public sector enterprise.  But there is no mistaking Aryama's legal lineage.  His grandfather, C.P.Ramaswamy Aiyar was a renowned lawyer, apart from being a prominent and a well-known face in India's public life.

The book is sure to fill a crucial gap in the legal biographies.  I am inclined to suggest that another book, choosing legal eagles, who do not owe their success to legal lineage, may perhaps be justified to correct the impression that this book might have unwittingly created among the readers. V.Venkatesan is the Senior Editor of Frontline and the author of Constitutional Conundrums: Challenges to India’s Democratic Process (LexisNexis, 2014).

The book can be purchased from here.

Dynamic Injunctions In India
Latest News
+ More
1Trial Court Must Not Be Overtly Possessed By Nature Of Offence: Jharkhand HC Sets Aside Conviction & Capital Punishment Of Rape & Murder Accused
2Child In Conflict With Law Gets Bail After 3 Yrs Custody; Orissa High Court Raps Police For 'Lackadaisical Attitude'
3'Litigation Dragged To Court, Reflects Sorry State Of Affairs': Jharkhand High Court On Govt Dept's Failure To Satisfy Compensation Award
4We Have To Address The Issue Of Freedom Of Speech Together As A Society: Justice Ravindra Bhat
5Bombay High Court Weekly Round-Up: May 9 To May 15, 2022
6Commission Paid To Persons Who Are Not Beneficial To Business Of Assessee Is Taxable : Orissa High Court
7Arbitration Cases Weekly Round-Up: 8th May to 14th May, 2022
8Gujarat High Court Weekly Round Up: May 9 To May 15, 2022
लाइव लॉ हिंदी
+ More
International
+ More
1Abortion Laws In The US And Other Countries
2Leaked Draft Judgment Of US Supreme Court Indicates Overruling Of Roe v.Wade Abortion Rights Decision
3The Indian Connection With Pak Decision To Live-Stream Court Proceedings
4Russian Suspension At The Human Rights Council: Band-Aid On A Bullet Wound?
Environment
+ More
1Supreme Court Permits E-Rickshaws In Matheran As Pilot Project To Check Feasibility
2In Case Of Doubt, Protection Of Environment Would've Precedence Over Economic Interest: SC Revokes Approval For Doubling Castlerock to Kulem Railway Line
3NGT Bars Auroville Foundation From Township Construction Till Environmental Clearance Is Obtained
4Ghazipur Landfill Fire: NGT Says Dump Sites In Cities Are Like 'Time Bombs', Constitutes Joint Committee Headed By Former Delhi High Court Judge