Though the Indian judiciary has many strengths, it is yet to fully meet the aspirations of our people for speedy and affordable Justice; President Pranab Mukherjee 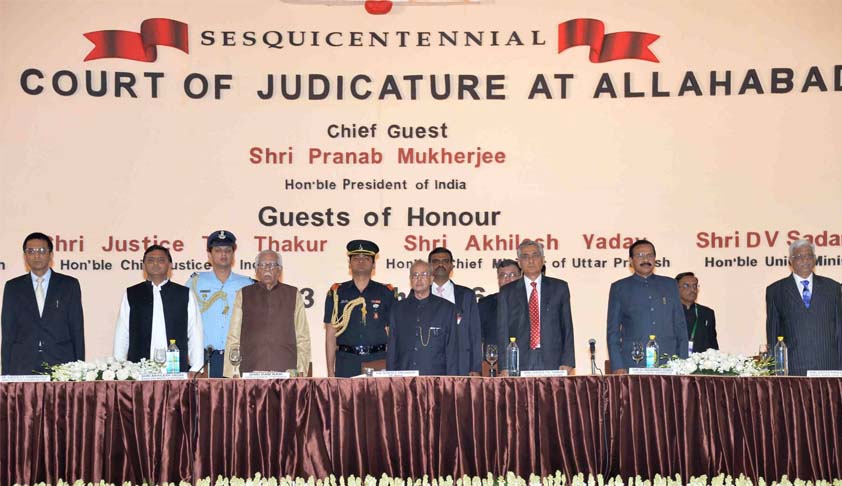 The President of India, Shri Pranab Mukherjee inaugurated the Sesquicentennial Celebrations of the High Court of Judicature at Allahabad today .

Speaking on the occasion, the President said that Allahabad High Court will complete 150 years of its existence on 17, March 2016. The High Court building will also complete 100 years of its existence in November 2016. There is thus a dual purpose to these celebrations in what is one of the largest temples of justice not just in India but the entire world. Today, the Allahabad High Court has jurisdiction over the largest state in India, covering nearly one-sixth of our total population. The rich jurisprudence emerging from this Court has benefited not just the people of Uttar Pradesh but the country at large. He congratulated the Allahabad High Court for its glorious contributions over one and a half century. He expressed confidence that the High Court will continue to uphold the basic values of equality, liberty and justice enshrined in our Constitution and safeguard the freedom and fundamental rights of our people so that they realize their full potential as worthy citizens of this great nation.

Though the Indian judiciary has many strengths, it is yet to fully meet the aspirations of our people for speedy and affordable Justice; President Pranab Mukherjee, said the President

Full Text of the Speech;

1. I am delighted to join this distinguished gathering of judges, legal luminaries, members of the Bar and other dignitaries for the inauguration of the sesquicentennial celebrations of the Allahabad High Court.

3. The Allahabad High Court was established by Royal Charter as the High Court of Judicature for the North Western Province on 17 March 1866 and initially had a seat at Agra. The High Court shifted to Allahabad in 1869.

4. This High Court, over the years, has earned fame as an institution of high standards with strong traditions and ideals. It’s Bench, as well as Bar, have been known for its intellectual erudition and legal acumen.

6. Today, the Allahabad High Court has jurisdiction over the largest state in India, covering nearly one-sixth of our total population. Having started functioning with six judges, it now has a sanctioned strength of 160 Judges, making it the biggest in the country. The Bar of the High Court in 1866 consisted of 6 Advocates. Its strength today is about 15,000 as per the rolls maintained by the Registry of the High Court. The rich jurisprudence emerging from this Court has benefited not just the people of Uttar Pradesh but the country at large.

8. The judiciary in India has played an important role since independence in strengthening the democratic framework of the country and maintaining rule of law. High Courts in particular have a unique position under the Constitution of India. They are not only guardians of people’s rights and liberty, they also have the onerous responsibility of ensuring that access to justice is not denied to any citizen on account of economic or other disability.

9. Judiciary, which is one of the three important pillars of our democracy, is the final interpreter of the Constitution and laws. It must help maintain social order by swiftly and effectively dealing with those on the wrong side of the law. As an upholder of the Rule of Law and enforcer of the right to liberty, the role of the Judiciary is sacrosanct. The faith and confidence people have in the Judiciary must be always maintained. For justice to have meaning for the people, it must be accessible, affordable and quick. Though the Indian judiciary has many strengths, it is yet to fully meet the aspirations of our people for speedy and affordable justice.

10. Our Courts are today overburdened on account of the large number of cases pending before them. There are over three crore cases pending in various courts throughout the country. Out of these about 38.5 lakh cases are pending in 24 High Courts. The pendency of cases in the High Courts has slightly declined from 41.5 lakh in 2014 to 38.5 lakh in 2015, but we still have a long way to go. Overall, out of a sanctioned strength of 1056 judges in all the High Courts, the working strength of High Court judges throughout the country as on 1st March, 2016 was only 591. Similarly, the sanctioned strength of judicial officers in district and subordinate courts in the country is about 20,500 out of which the working strength is only about 16,000 at present. 12. Justice delayed is justice denied. I am sure that the Central Government and the State Government will extend all support to the Allahabad High Court in its endeavour to reduce pendencies. The Governments, Judges and lawyers must work hand in hand to make justice a living reality.

13. Increasing the number of courts and judges and judicial officers at all levels is the first step towards achieving the objective of timely delivery of justice. The government and the judiciary are collectively addressing this issue through an ongoing increase in the sanctioned strength of judges both at the level of the High Courts as well as District and Subordinate Courts. These sanctioned posts need to be filled quickly so that requisite judicial manpower is available for timely disposal of cases.

14. Along with increasing the strength of judges, development of judicial infrastructure is a priority area. I am glad that Central Government has initiated a centrally sponsored scheme for infrastructure development and sanctioned Rs. 3694 crores to States/ Union Territories in the last five years, which combined with resources from the States is creating new court complexes and residential buildings for judicial officers across the country.

15. It is imperative that we speed up adoption of information and communication technology in the judicial system. The process of computerisation of district and subordinate courts is underway through the eCourts Integrated Mission Mode project of the Central Government. Most of the courts have already been computerised pursuant to this initiative and I eagerly look forward to the day when all courts in the country will be integrated with the National Judicial Data Grid. I am particularly happy that a Centre for Information Technology has been established in the Allahabad High Court and approximately one crore decided case files running into 50 crore pages are to be digitized within one year.

17. Another way to reduce the number of cases before courts is through the widespread adoption of alternative dispute resolution (ADR) mechanisms that allow for quick and effective settlement of disputes. Right incentives must be provided to courts to support the use of ADR and at the same time, litigants should be made aware of the benefits of using ADR mechanisms and motivated to use the same. Mediation, in particular is an extremely effective tool for resolution of disputes such as matrimonial and property matters.

18. Further, there must be adequate provision for free legal aid. Greater efforts are also needed to spread legal literacy across the nation and improve the quality of legal education.

19. As you are aware, the Government has launched the ‘Make in India’ campaign to turn our country into a manufacturing hub. To make this programme a success, we need to improve the ease of doing business in our country. Enforcement of contracts is a key yardstick in measuring the ease of doing business. The Government and judiciary must work in tandem to reduce costs and time taken for dispute resolution.

20. Over the past few years, a number of legislative changes have been introduced in procedural laws governing civil and criminal trials. These include measures to ensure that trials proceeds on a day to day basis, limiting of unnecessary adjournments, imposition of costs for causing intentional delays and integration of information and communication technology in court processes. Section 436A has been added to the Code of Criminal Procedure to provide for release of under trial prisoners who have undergone half of the maximum period of imprisonment for the stated offence. All these changes will contribute to preventing delays in the delivery of justice.

21. Lawyers play an extremely important role in enabling the public access justice. The legal profession is regarded a noble profession in every society where the rule of law prevails. In India, a large number of our national leaders have been lawyers. Advocates are a vital pillar in the scheme of our constitutional governance and judicial process. They are bestowed with the responsibility to advocate citizens’ rights and maintain the integrity and independence of the legal system. Advocates must zealously fulfil this professional responsibility.

22. Let me conclude by congratulating the Allahabad High Court for its glorious contributions over one and a half century. I am confident the High Court will continue to uphold the basic values of equality, liberty and justice enshrined in our Constitution and safeguard the freedom and fundamental rights of our people so that they realize their full potential as worthy citizens of this great nation.