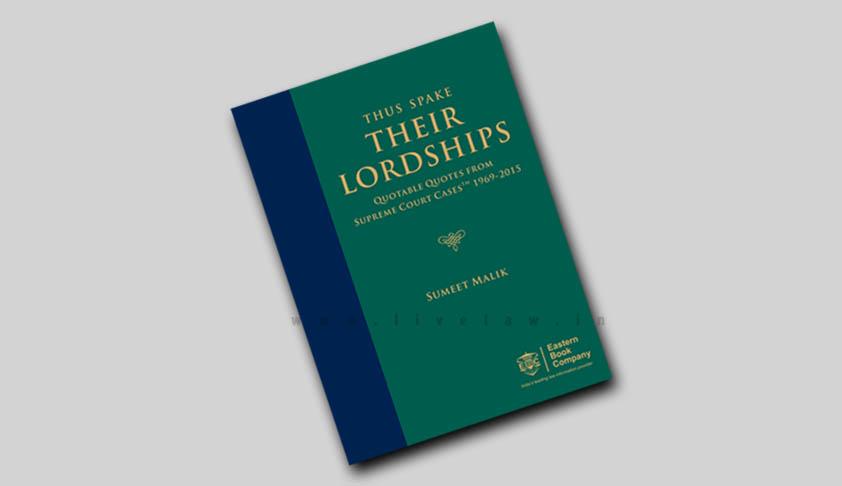 In dispensing justice, the Supreme Court Judges state both the mundane and the profound.  The journalists covering the 14 courts in the Supreme Court are most likely to miss both, because what interests them are observations from the Judges during the hearing, which could be turned into headlines.  Once judgments are delivered and uploaded online, journalists again look for...

In dispensing justice, the Supreme Court Judges state both the mundane and the profound.  The journalists covering the 14 courts in the Supreme Court are most likely to miss both, because what interests them are observations from the Judges during the hearing, which could be turned into headlines.  Once judgments are delivered and uploaded online, journalists again look for headline-making aspects in them, and ignore the rest.

Academics, on the contrary, write lengthy treatises, and analyse the judgments for what they contain and what they don’t.  In both the journalistic and academic accounts, thus, there is absence of an effort to put together observations of all the Judges from the beginning, which could be legal maxims on a variety of subjects, easily accessible by an interested reader.

Sumeet Malik’s book, is a brilliant idea to fill this gap in the available literature.  Assisted by Bhumika Indolia, this book appears to be in the making for several years.  Quietly, that is, even as the publishers were busy with other projects.

As Malik puts it in the Preface, this is an effort to collect “those pearls and weave them in a thread to make a beautiful necklace”.   He adds, “these gems of sublime thought and felicitous expression embody the aspirations and values of our developing law and deserve to be treasured and are worthy of being cited.”

In order to make sense of what has been achieved in the book, this reviewer literally counted the number of topics in the Topic Index, and the number of Judges in the Judge Index.  The number of topics, excluding the cross-references given beneath them, came to 1363.  Each topic lists quotable quotes from Judges directly dealing with that topic.

According to the Supreme Court’s website, as many as 194 Judges, including 42 Chief Justices have retired from the Court and if you include the current strength of 26 Judges, it will be 220 Judges with quotable quotes. The Judge Index in Malik’s book, however, includes only 168 Judges.  One wonders whether there were no quotable quotes from the remaining.

That apart, it is the number of cross-references given under each topic, which amazes a reader.  The topic, Arbitrariness, for example, is a cross-reference entry under other topics such as, Abuse of Power, Equality, Exercise of Power, Governor, Reason, Reasonableness, and Rule of Law.  In a recent judgment, Justice Jasti Chelameswar held that arbitrariness cannot be a ground for striking down a law [Raj Bala vs State of Haryana].  He held so because in his view, arbitrariness, after all , is a value judgment.  There are as many as 14 observations culled from the previous Supreme Court judgments on this topic, in the book, which are sure to guide the reader, for further research, if interested.

Take another topic, ‘Collective Consciousness’.  The term has been abused by Judges in order to justify death penalty on the dubious ground that collective consciousness of the society demands it, in view of the heinous crime committed by the convict.  However, if anyone asks what the Judges meant by collective consciousness, and whether there is any judicial way to identify it, there would be no answers.

The book shows that the term, ‘Collective Consciousness’ might perhaps have had its origin in a maintenance case, decided by the late Justice V.R.Krishna Iyer.  In Captain Ramesh Chander Kaushal v. Veena Kaushal, decided by him in 1978, Justice Iyer held as follows: “Lascivious looseness of man or wife is an infectiuous disease and marks the beginning of the end of the material and spiritual meaning of collective life. The roots of the rule of law lie deep in the collective consciousness of  a community and this sociological factor has a role to play in understanding  provisions like Section 125, Criminal Procedural Code which seek to inhibit neglect of women and children, the old and the infirm.”

The book is not, however, without its aberrations.  Religious pluralism is shown as a separate topic, as distinct from secularism.  Even as one is curious to know the subtle distinction between these terms, the entry under Religious pluralism directs the reader to go to Secularism.  There are a number of topics beginning with Constitutional.  But there is no separate entry for Constitutional morality, which is surprising. The term, Constitutional morality, was discussed at length by the  Delhi High Court in the Naz Foundation case.    The silence of the Supreme Court judges on this topic is amazing, if the omission is not due to the author’s oversight, or deliberate decision because there is no quotable quote on the subject.

On the whole, the book is a useful addition to the library of every student and practitioner of law.