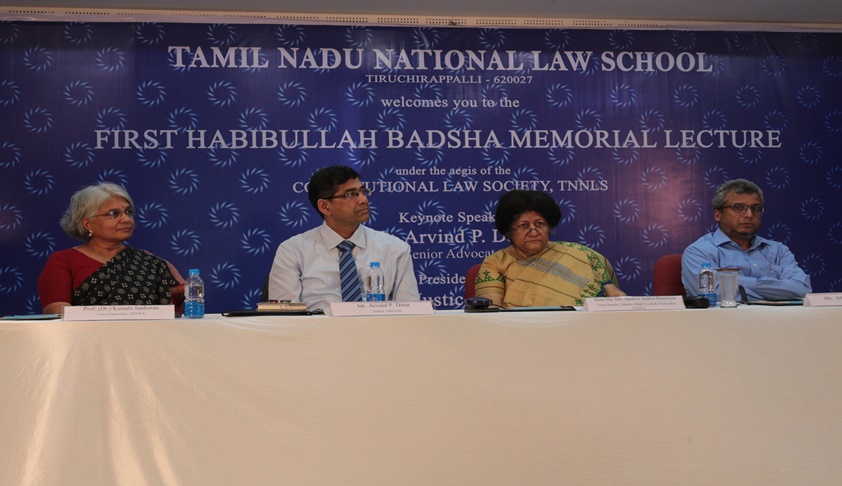 The Tamil Nadu National Law School (TNNLS), Tiruchirappalli, under the aegis of Constitutional Law Society, conducted the first Habibullah Badsha Memorial Lecture on Saturday at its campus. The keynote address was delivered by senior advocate Arvind P Datar and the lecture was presided over by Chief Justice of Madras High Court and Chancellor of Tamil Nadu National Law School Justice Indira Banerjee. The lecture witnessed the participation of Justice TS Sivagnanam, Additional Advocate General C Manishankhar and other senior advocates of the Madras High Court, the children of Habibullah Badsha, judicial officers, officers of the State Administration, and bureaucrats of Tiruchirappalli district as well as the faculties and students of TNNLS.

The memorial lecture started with the welcome speech given by Pritam Dey, faculty advisor of Constitutional Law Society, TNNLS, and the inaugural address was given by Vice-Chancellor Prof. (Dr.) Kamala Sankaran.

Following the Vice-Chancellor’s address, Abdul Jabbar Suhail, son of Habibullah Badsha, spoke on the legacy of his father, while adding that dedication and commitment to the profession would help one reach greater heights. He also highlighted his father’s stint as the public prosecutor during the time of Emergency, where he fought for those wrongly accused at the court ferociously without any fear. He also recounted how he was offered judgeship at the Madras High Court at the age of 37 and at the Supreme Court in the 1980s which he denied. He also spoke on his steadfast devotion to his profession and commitment to the needs of the poor and his altruist nature of supporting legal clinics. The way he articulated the reminiscence of his father instilled in the students a sense of awe and inspiration.

Additional Advocate General C Manishankhar then talked about his days as a junior to Habibullah Badsha and he highlighted his commitment to constitutional ideals not only in his profession but also in his interaction with the juniors.

The Presidential Address was delivered by Chief Justice of Madras High Court, Justice Indira Banerjee who praised the legacy of Habibullah Badsha despite not being able to meet in person.

Highlighting the honour and respect earned by Habibullah Badsha and recounting his earlier days in Tiruchirappalli where he was enrolled as a part-time lecturer, Arvind P Datar, keynote speaker for the lecture memorial, spoke on the need for balancing the right to privacy and state surveillance. He also expounded on the development of privacy in the United States and how the dissenting opinions of the earlier cases later became the majority opinion both in U.S. and in India. He also explained how the state of Tamil Nadu contributed to the development of privacy in India through three cases; i) Auto Shankar case; ii) Mr. X v. Hospital Z case, and iii) Selvi v State of Karnataka. He then explained his position in the Aadhaar case and the arguments and counter-arguments presented before the Supreme Court. He also explained why compulsory requirement of Aadhaar for social security schemes was against its very “voluntariness” and compared with the Social Security Number which was mandatory in the U.S. He finally gave insights into the recent Cambridge Analytica scandal and how data and metadata could be used to create an entire profile of a person, thus not only being able to physically track them but also predict their behaviour.

An open house discussion was allowed later where students enquired on the intricacies of the debate between Aadhaar and right to privacy.

Finally, the winners of the 1st Habibullah Badsha Essay Competition, 2018 were felicitated by the dignitaries which were succeeded with the vote of thanks.