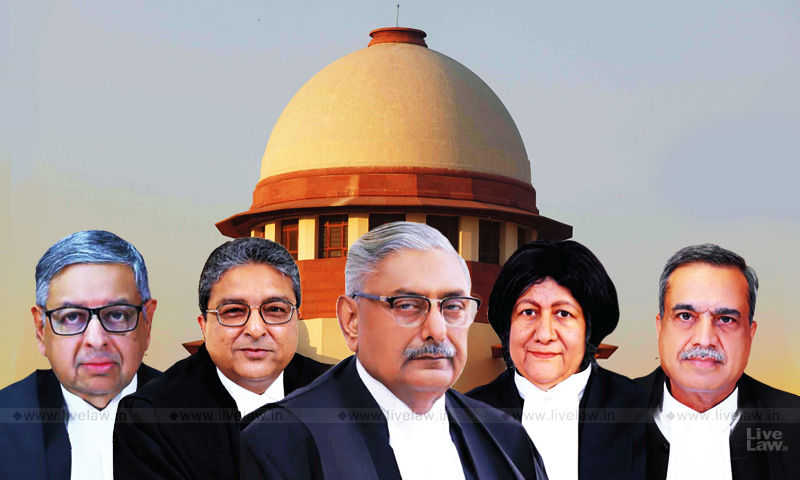 The Supreme Court on Wednesday held that 100 per cent reservation of teachers belonging to the Scheduled Tribe category at schools situated in "Scheduled Ares" is constitutionally invalid.A 5 judge Constitution bench led by Justice Arun Mishra quashed the Government order issued under the hand of Governor of State of Andhra Pradesh which had affirmed absolute reservation for...

The Supreme Court on Wednesday held that 100 per cent reservation of teachers belonging to the Scheduled Tribe category at schools situated in "Scheduled Ares" is constitutionally invalid.

The Court has also reiterated the Indira Sawnhey Judgement, according to which Reservations are constitutionally valid if they do not go beyond 50%.

The issue had reached the Apex Court after an appeal was filed against the Andhra Pradesh High Court Order that had upheld the Government Order providing for the aforementioned cent per cent reservation.

The court has also interpreted the judgement prospectively and not "retrospectively" and held that the existing appointments made in excess of the 50 per cent reservation shall survive but shall cease to be effective in the future, thereby providing a relief to those who had already been appointed basis the saif government order.

Chebrolu L. Prasad had filed appeal against the High Court order contending that the Governor order was discriminatory as it affected not only the open category candidates but also other reserved category candidates and reservation under Article 16 (4) should not exceed 50%.

"The 100% reservation would amount to unreasonable and unfair and cannot be termed except as unfair and unreasonable. Thus, we are of the considered opinion that providing 100% reservation to the scheduled castes and scheduled tribes were not permissible. The Governor in the exercise of the power conferred by para 5(1) of the Fifth Schedule of the Constitution, cannot provide a 100% reservation", held the bench also comprising Justices Indira Banerjee, Vineet Saran, M R Shah and Ravindra Bhat.

" By providing 100 percent reservation to the scheduled tribes has deprived the scheduled castes and other backward classes also of their due representation. The concept of reservation is not proportionate but adequate, as held in Indra Sawhney (supra). The action is thus unreasonable and arbitrary and violative of provisions of Articles 14, 15 and 16 of the Constitution of India. It also impinges upon the right of open category and scheduled tribes who have settled in the area after 26th January 1950. The total percentage of reservation provided for Scheduled Tribes in the State is 6%. By providing 100 percent reservation in the scheduled areas, the rights of the tribals, who are not residents of the scheduled areas, shall also be adversely affected. As per Presidential order under Article 371­D, they cannot stake their claim in other areas. The posts in other areas are to be reduced by making a 100% reservation in a particular area."

The Court noted that the population in the scheduled areas not only includes scheduled tribes but also open category, scheduled castes, and other scheduled tribes settled after 26.1.1950, and they are not covered in the notification.

"No law mandates that only tribal teachers can teach in the scheduled areas; thus, the action defies the logic. Another reason given is the phenomenal absenteeism of teachers in schools. That could not have been a ground for providing 100 percent reservation to the tribal teachers in the areas. It is not the case that incumbents of other categories are not available in the areas", the bench observed.

"The reason assigned that reservation was to cover impetus in the scheduled areas in the field of education and to strengthen educational infrastructure is also equally bereft of substance. By depriving opportunity to the others, it cannot be said that any impetus could have been given to the cause of students and effective education, and now that could have been strengthened. The provisions of 100 percent reservation are ignoring the merit. Thus, it would weaken the educational infrastructure and the merit and the standard of education imparted in the schools. Educational development of students cannot be made only by a particular class of teachers appointed by providing reservation, ignoring merit in toto. The ideal approach would be that teachers are selected based on merit", added the bench.

The Supreme 5-judge Bench headed by Justice Arun Mishra had on February 13 reserved its judgment on whether in schools in Scheduled Areas, 100 % reservation in the posts of teachers can be made in favour of members of Scheduled Tribes.

"Initially, the reservation was meant for the transitional phase...for ten years (of the coming into force of the constitution...then it has been extended every ten years. Is there any safeguard against this renewal?", asked Justice Mishra had asked.

"Your Lordships have asked a politically forbidden question", quipped Senior Advocate Rajeev Dhawan, appearing for the state of Andhra Pradesh.

"No, not political. But now we are moving towards 100% reservation...We are positive right now. We are not against reservation. But to what extent? Should it be brought down? Is study required or not? Should we collect quantifiable data?", questioned the judge.

"It should not go if even one person is backward. If the benefit is not percolating, then we should give them secularity?", he continued.

"Your Lordships are speaking about the temporality- when did reservation start, how long will it go on...Dr. B. R. Ambedkar had said that politically, we have given one person, one one. But in social and economic matters, there is no equality. Until we do so, the entire constitution will blow apart...", responded Dr. Dhawan.

"What should be the barometers for that?", asked Justice Mishra.

"The barometers should be left to the government to some extent", said Dr. Dhawan.

"Can you imagine a non-tribal teacher making you 'murga', twisting your ear or smacking you? It would be like ragging in college. Normally, it happens, but when there is a disparity?", he advanced, talking about the teacher's understanding in such an instance and when parents would complain that their child had returned home crying because they were beaten.

"Once we have put someone in a schedule, should they be there in perpetuity? Why is there not an effort to take them out? If we keep them there in perpetuity, the same instance will happen everywhere. Why are they not able to bring the tribals at par?", Justice Mishra reflected.

"We keep tribal culture intact. And then we give them reservation!", remarked the judge.

"Has it improved the situation of the tribals or has it remained the same? WE HAVE to see the effect in the two decades. Are there any statistics as to this of the last 20 years?", probed Justice Vineet Saran.

"In some areas, it has (improved)...this depends on urbanisation...", answered Dr. Dhawan.

Justice Mishra had earlier inquired if Article 14 is only about classification and how it deals with arbitrariness.

"Whether this reservation has a local limit of that particular area or district? As in, only STs of that area or district can apply? In that case, others will suffer because you ar giving 100% reservation and that too area-wise...chances of SC are also minimised", Justice Mishra had observed earlier, quoting that "total reservation is negation of merit".

On a discussion on Paras 5(1) and 5(2) of the Fifth Schedule, the judge noted, "Article 31C also has a similar provision. Tribals given protection there. There seems to be some over-lapping".

"Nagaraj had said that the 50% upper-limit (on reservation) can be exceeded if the state has 80% population which is backward", the judge had observed.

Justice Mishra remarked, "This area is not totally tribal. We cannot lose sight of the fact that 40-50% of the population is so when we are considering Articles 15 and 16..."

He had asked the Counsel for the petitioners if the SC and the ST are also "backward" classes. When he was informed of Justice Jeevan Reddy's opinion in Indira Sawhney that they are "the most backward", Justice Mishra iterated, "But all are backward..."

"Whether the power to make 'exceptions and modifications' (under Para 5(1) of the Fifth Schedule, of the Governor in applying any law of the Parliament or the state legislature to any Scheduled Area, in exercise of which the notification making 100% reservation was issued), includes the power to totally substitute the law? That would mean absolute power to the Governor which could be derogatory to the Legislature...'exceptions and modifications' is narrower (in scope). Can the Governor reframe the entire scheme?", the judge had inquired.

"Suppose one section of the SC/ST class is now same as General, is there any way out? What is the way out if someone has actually developed and wants to come out of that group?", pressed Justice Mishra.

"In Chhattisgarh also, there is 70-80% reservation. But there are no candidates for many posts. And it is a punishable offence to fill these posts from outside (the reserved category)", observed Justice Mishra.

"Teachers are not available. I am telling you. People don't want to go to these areas...('Some migrate, some are not sufficiently educated...It is the same problem as doctors', conceded Dr. Dhawan)...the people who go to America, 99% of the times, they are in villages in America, not in the main cities...where to find the teachers?", continued the judge.

"And if you don't have students, how will you get teachers?", asked Justice Mishra.

"They don't have teachers, inspite of 100% reservation. And outside teachers, who may be meritorious teachers, are not taken. So who will be manning these posts? Unqualified, Untrained persons? That is the bitter reality...When they haven't learnt, what will they teach? The people remain backward!...Firstly you may not get the teachers. And if you do get, they are not equipped. So 100% reservation is advantageous or disadvantageous for such areas?", reflected Justice Mishra.

"There is no good merit to compete...this leads to ad-hocism...it cannot be regularised", he continued.

The bench wondered if one section could be accorded priority over the other, so far as the SC/ST are concerned- "If it can be done, many problems would be solved...is it permissible to do? Is it bonafide to do so?"

"We talk of preservation of culture. And then we spend so much on bringing them up. But they are still (unclear)...we are not giving them exposure. Is this how benefits will percolate down?", noted Justice Mishra.

Next, Senior Advocate R. Venkataramani, also for the state of AP, began with stating that post independence, most Scheduled Areas are regarded as "Red Corridors", "Naxal areas".

"What do they want? Economic, social justice, which is not able to percolate down. The have-nots remain have-nots....You keep ignoring them, and then want to solve the violence? What you sow, you reap!...2 decades have passed. What have you achieved? Few people are benefitting, other SC-ST are turning naxalite...persons have been deprived of employment, property. Why are the benefits not able to percolate down? You will have to answer this ultimately...how will 100% help you?", demanded Justice Mishra.